The current ISU World and European Champion discusses her preparation for Helsinki, her fans and her coach.

Q: Almost two months have passed since the European Championships. What have you done in this time except for training?E: I went to some events. I appeared in a television program, I did a photo session for the magazine Tatler, I participated in the birthday show for Tatiana Tarasova, where I met conductor Vladimir Spivakov and I went to a concert that he conducted. And I had to study, because I have school exams this year.

Q: How do you prepare mentally for Worlds, the biggest competition of the season? How much are you looking forward to it?
E: I can’t wait for the departure. It always has been very interesting for me to perform at competitions at that kind of level. I’m really waiting to meet the other skaters, because we can see each other only very rarely.

Q: Since the season 2014/15 you have been going from one victory to the next. How difficult is it to find new motivation? Can you get tired from winning?
E: Each victory just is the motivation to move forward. I don’t really get this last question, though. I am only 17 years old.

Q: What has changed in your life since you won the world title in Boston?
E: Nothing has changed for me in my relationship with my friends and other people around me. I’m happy that all the people that are important for me stayed with me and treat me just like Zhenia. Only my inner world has changed. I started to approach things more consciously, with more responsibility and start to look at the world differently. This also might come with age, but I believe the World Championship and the whole past season gave me a lot of experience and has changed me significantly. Even not my character, only the way I am looking at things.

Q: You defended your titles at the Grand Prix Final, Russian Nationals, Europeans. Does it get harder or easier?
E: Each competition is tough for me, because I have a certain task to fulfill. I can’t say that if it was harder or not. Honestly, a competition never is easy. For me it is very important to go out and to show good skating, because many people know how I can skate and I want to show my maximum. 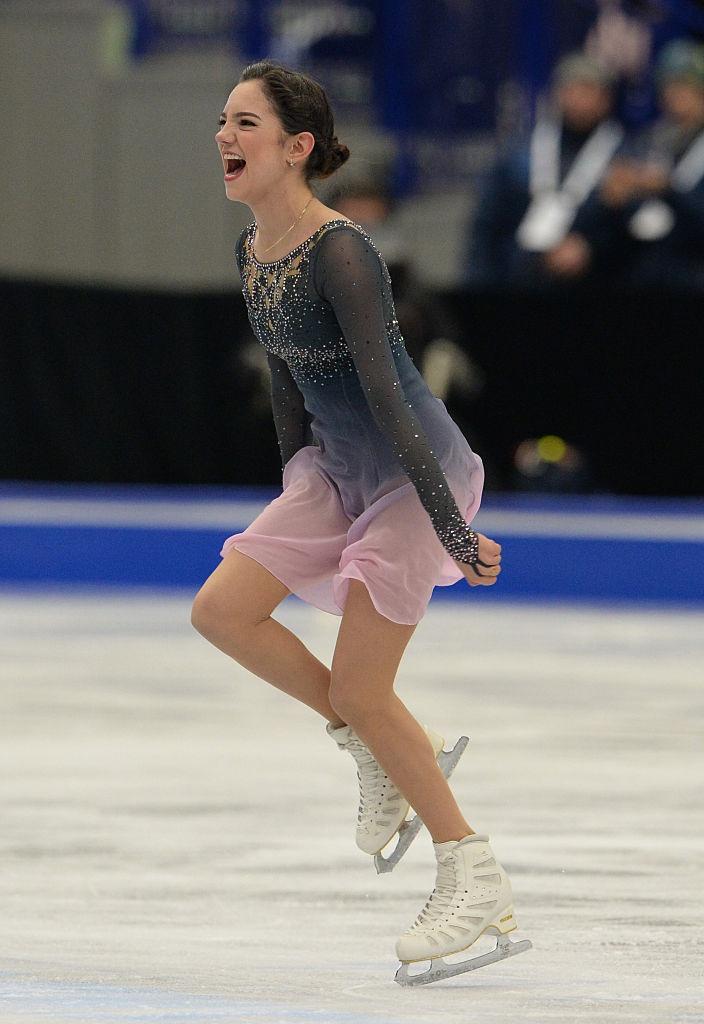 Q: After being so dominant last season, how much pressure do you feel to repeat your success?
E: I don’t see it as pressure. During the Grand Prix, a whole lot of people did not sleep at night, they stayed up to watch it live. I didn’t think that a fan, sitting in front of the TV and watching me says ‘You have to (win)! If you don’t do it, you don’t need to come home’. That would be pressure. I think that the real figure skating fans are sharing the excitement with their athletes, they want them to get onto the podium and to skate clean, and this is support. The people are watching, they are rooting for you and they put into the skating of their athletes a little part of their soul and that gives us strength.

Q: But you don’t want to disappoint your fans.
E: Of course not. The people that are supporting me, are my wall and without their support it would be harder.

Q: You communicate with your fans on social media and you get a lot of positive messages and support. How do you react when someone writes something negative?
E: There is always someone who wants to stand out. Not everybody can like my program or what I’m doing. But it is helping me that there are more benevolent people than malevolent people.

Q: Unfortunately, there are always some people that are writing really mean things. How do you react to that?
E: Not at all. This looks so stupid that sometimes I just laugh out loud. There was a comment like ‘why does this school girl have to do that, she should go and learn how to cook borshch (red-beet root soup)’.

Q: At Russian Nationals you did a triple Salchow-triple toe-triple toe combination, an extra triple so to say.
E: I just know that the rules allow me to do it (the extra jump does not count, T.F.) and I talked about it with my coach, but it was not a specific goal to show it in this competition. I just felt I still had strength left and decided to do this combination. I think the spectators liked it. Right away my mood went up. It never happened to me before that I expressed during the program some other emotions than those that refer to the character of the program. I enjoyed it, it was great. I just wanted to this combination in an official competition. I think I will try it again in the future.

Q: You and your coach Eteri Tutberidze seem very close.
E: We have a similar character. I think in my character I have traits from my parents but also from my coach, for example the stubbornness, sometimes extreme stubbornness.

Q: Some people say that Eteri Tutberidze is a very severe coach.
E: Severe is a very hard word. This is the sport, and you have to put in a lot of effort and to force yourself. For us, it works out very well in our common work and the connection of our characters.

Q: Are there risky elements you would like to do against the will of the coach?
E: Yes, there was something like that. I’d like to try a quad, this would be interesting, maybe at the end of the season.

Q: You are training together with Alina Zagitova, who was very strong this season. How difficult is to see a future competitor coming up?
E: We are not only skating at the same rink, but in the same group at the same time. I love competition, the healthy competition that we have now in our group. The athletes have an absolutely normal and friendly relationship. When you feel that someone next to you is improving you start moving forward.

Q: What do you feel when you do your triples jumps, rotate in the air?
E: I thought about to what this compares to. If you are playing a game and you have the task to reach a certain level and when you get there, then I think everyone knows this feeling when you fulfilled a task. There are different degrees of difficulties, starting with the triple Salchow and ending with flip-toe-toe-toe. When you did it, it gives you an inner tranquility. In the jump, I am fully aware of where I am. It is an absolutely conscious action.

Q: Some critics said your programs this and last season are similar in style. How do you feel about that and do you think about doing something very different in the next season?
E: I can’t say that they are the same. For me, the story and the programs are totally different. But I want to try myself in a new character, maybe more energetic and passionate. But right now my task is to finish this season in a good way.

Q: In one interview you mentioned that you are a shy person in your private life, but on the ice you are completely different. How do you combine these two sides of your personality?
E: I think that life and the life in the sport, on the ice are different things. Actors are also not always playing in front of an audience.

Q: Thank you very much and good luck for the World Championships.