Czech Republic’s Michal Brezina has been a fixture in the skating world for many years. The amicable skater is known for his excellent jumping technique and his modern, nonchalant style on the ice.His talent was obvious from the very beginning when he started competing internationally 14 years ago and over the years, the three-time Czech Champion accumulated many medals including a bronze medal at the ISU European Figure Skating Championships 2013. However, Michal also has hit lows in his career such as finishing 18th at the ISU World Figure Skating Championships 2017, his lowest result since his debut at the event in 2010.

In February 2018, Brezina, whose father Rudolf is a figure skating coach and whose younger sister Eliska is a competitive skater as well, competed at his third Olympic Winter Games, coming 16th. While many skaters of his age would have retired after participating once more at the Olympic Games, Michal decided to stay – and caught a second wind this season. The now 28-year-old took two silver medals at the ISU Grand Prix of Figure Skating series and qualified for the ISU Grand Prix of Figure Skating Final for the second time in his career, where he finished in fourth place. He returned to the Grand Prix Final after seven years.

“At first I wasn’t really sure if I still want to go (and compete). But Rafael (Arutunian, coach) and my federation convinced me of giving it one or two more years. So I’m giving it one, I’ll see how it goes from there,” Michal, who trains in Lakewood, California (USA), shared. His federation asked him to stay to motivate the next generation of skaters in Czech Republic. “I know how that feels, because when Tommy (Tomas Verner (CZE), 2008 European Champion) stopped skating, it was hard for me to find the motivation and something that pushes me forward. When he stopped, I kind of fell asleep, because I didn’t really have competition in my country and even not in my training base that I was in. When I moved to Rafael (in 2016), it all changed, because when I go out on the ice for training, there is competition all the time. We push each other, the group that Rafael created, we’re trying to push each other and it works very well,” he continued. Skaters Michal trains with include 2018 World Champion Nathan Chen (USA) and Romain Ponsart (FRA).

Brezina started the season with a silver medal at the ISU Challenger Series event US International Figure Skating Classic in Salt Lake City. “I think I’ve built up from there pretty well and I think so far, it’s one of the best seasons I’ve had even in my career,” Michal said. The athlete credits his coach of two and a half years, Rafael Arutunian, for getting more consistent and achieving better results this season. “He pushed me to no limits. He also told me it will take two years to come back (to the previous level). I didn’t believe him at first, but I guess he has his math pretty well calculated,” Brezina explained. 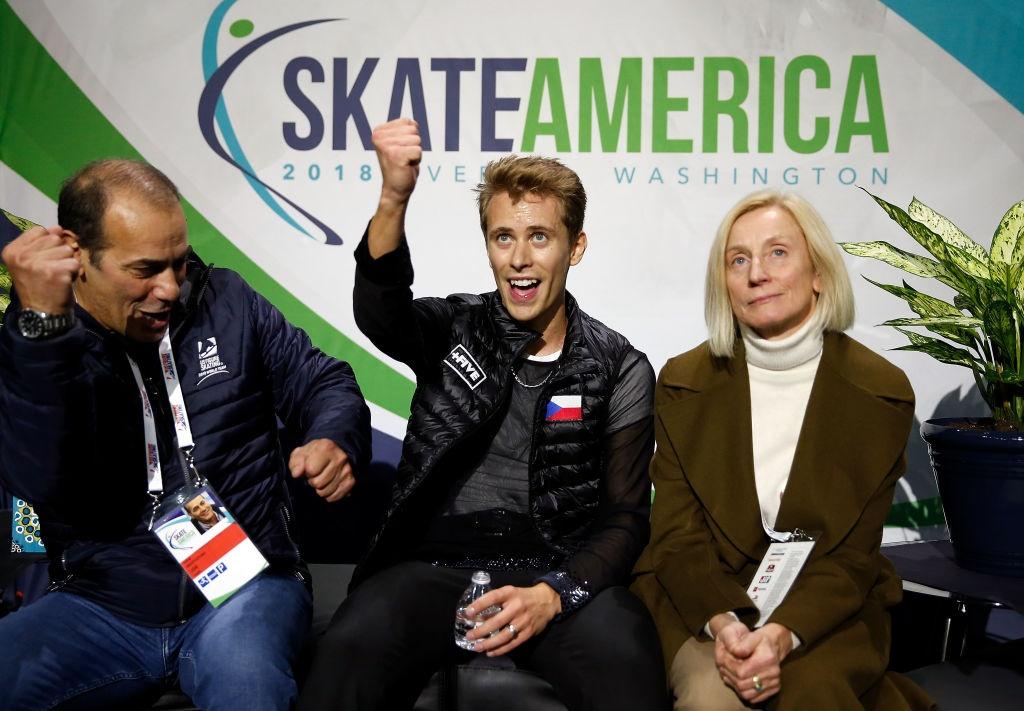 The skater believes that mainly two things helped him improve as much as he did: “It really helped when I moved to Rafael and everything he changed in my – not I would say jumps or anything – but basic skating and understanding of what I’m actually doing on the ice. The understanding of where I am supposed to be on my blade, where the weight goes and how you press into certain edges when you go into certain jumps. I think another thing that helped a lot was that I started coaching in the summer. So when I teach the little kids it actually makes me think about what I’m doing in my own practice. It helps a lot, because as I’m explaining it to them, I’m explaining it to myself as well.”

Another important point for Brezina is that he has built a life outside skating. He got married in June 2017 to former competitive skater Danielle Montalbano, but he tries to keep skating out of his private life. “When I come home, we don’t like to talk about skating. We will talk about it, my wife will always ask, how was my day, what did I do, how practice went, but that’s about it. We don’t really go into details. So I don’t have skating in my life 24 hours a day. I think that helps a lot, because it takes my mind off skating completely. Once I leave the rink, I have a life outside skating. It makes it actually a lot easier to come back to the rink and to be ready to work again, because I’m not pressed down by my practices. If they don’t go well and if I don’t have anything else, I come back the next day and I feel exactly as I left from the rink. So, if practices were bad, and I left the rink mad, and I come back the next day and I’m still going to be mad, if I don’t have something else to take my mind off. Now it is different, when I get home, I completely forget about it, even when I leave the rink, I forget about it,” he continued.

Today marks one year of from the best day in our lives!! We have many stories to tell in that one year and im sure we'll have a lot more in the years to come! Love you to the moon and back @d_montalbano

At the same time Michal’s wife Danielle, who competed for Israel in singles and pairs and now has started coaching, fully understands what it takes to be a competitive skater and can support him. “I don’t think it (getting married) changed much, but it definitely changed the way I look at what we do and how we go about living in general,” Brezina pointed out. “You come home and there are bills to pay and you make sure to spend time together and it’s not just in the rink or somewhere around skating, because then you don’t really have anything to talk about but skating and that’s also not very healthy. I always try to keep the skating outside of our relationship, even though we’re both figure skaters and we’re most likely to stay in skating, because we both really love teaching and we love helping kids.”

Took a little sunday fun ride! Beautiful weather and just the noise of my engine in my ears ;) #freedomride #harleydavidson #FindYourFreedom @harleydavidson

Brezina also took another passion and talent he has to create yet another aspect of his life “outside skating” that at the same time is connected to skating: The Czech, who is interested in design, last summer launched a clothing line named “+Five” together with his wife. “In skating, if you get +5 it means usually, in the eyes of the judges, it was perfect. To us, perfection is not a destination, it’s not something that you can always attain. It’s more your attitude towards what you’re doing and what you think perfection can be and what you think perfection can mean to you. So, for us, it’s an attitude. It’s the way you push yourself and challenge yourself in practice, because everybody’s vision of perfection is different. Everybody has a different style of skating, a different style of jumps and not every single skater looks the same on the ice,” Michal explained. “There is always a way to step up, you can always be better. You always can be better than you were yesterday. When I get on the ice with my training shirt that says “+Five”, I think more about what I have to actually do in order to be able to wear that +Five. It pushes me and I ask myself, did I do everything in my power to attain perfection today? Was my practice, was my attitude towards practice enough so that my coach would think all my elements were +5 today.”

As Michal is busy with training and competing right now, it is mostly Danielle that runs the company, but he helps her as much as he can. “We’re working together on the training clothes. It’s not that much of a crazy design as I used to do, it’s a little bit more subtle, because a lot of the skaters like simple things,” he added.

Brezina is part of a group of older skaters that, to the delight of many fans, keep going. There is also Alexei Bychenko, 30, who represents Israel and came fourth at the ISU World Figure Skating Championships 2018 and Russia’s Sergei Voronov, 31, who also qualified for the ISU Grand Prix of Figure Skating Final this season. “At Skate America I was with Sergei and Alexei and in Helsinki (at the Grand Prix) it was just Alexei. It was funny, because we always look at the younger kids, they’re coming to the rink, getting ready for their first practice. We’re watching them and think, yeah, we used to be like that, too. Once you get older, you find out that if you’re not ready before you come to the competition, being all hyped up and trying to show everybody that you’re better than everyone else, is not going to help you. If you’re ready, you come to competition and do your job. That’s all you can do. There is nothing in between,” Michal shared. He also believes that the rule changes this season are positive for the more experienced skaters. “It helps the older skaters, because it is very hard to put five or six quads into a four minutes program, especially if you have to do the quads in less than a minute. And you have to do everything else with it, because otherwise the competition program is going to be just jumps. I think it helps the older guys sometimes to maybe be even better than the younger guys that are trying all these crazy things,” he noted.

Michal Brezina is scheduled to compete next at the ISU European Figure Skating Championships 2019 in Minsk (BLR). He will contest his 12th consecutive Europeans and enters as one of the medal contenders.

Eteri Tutberidze: "At the Junior level usually girls are better than boys"