The Journey from Juniors on to the Big Stage: Aleksandra Boikova/Dmitrii Kozlovskii (RUS)

The first major step on this journey to success was the very first ISU Junior Grand Prix of Figure Skating for this young team. “It is a long time ago and now it is hard to remember the emotions in detail, but I do remember that we were very happy that we went to Saransk,” Aleksandra recalled. “There we got the silver medal and were very surprised that we then went to Dresden (GER, their second ISU Junior Grand Prix of Figure Skating event). This competition was in question for us, but then I dreamed that we would get Dresden. A week later we got the news that we were going to Dresden and we were very happy about that again,” she continued. 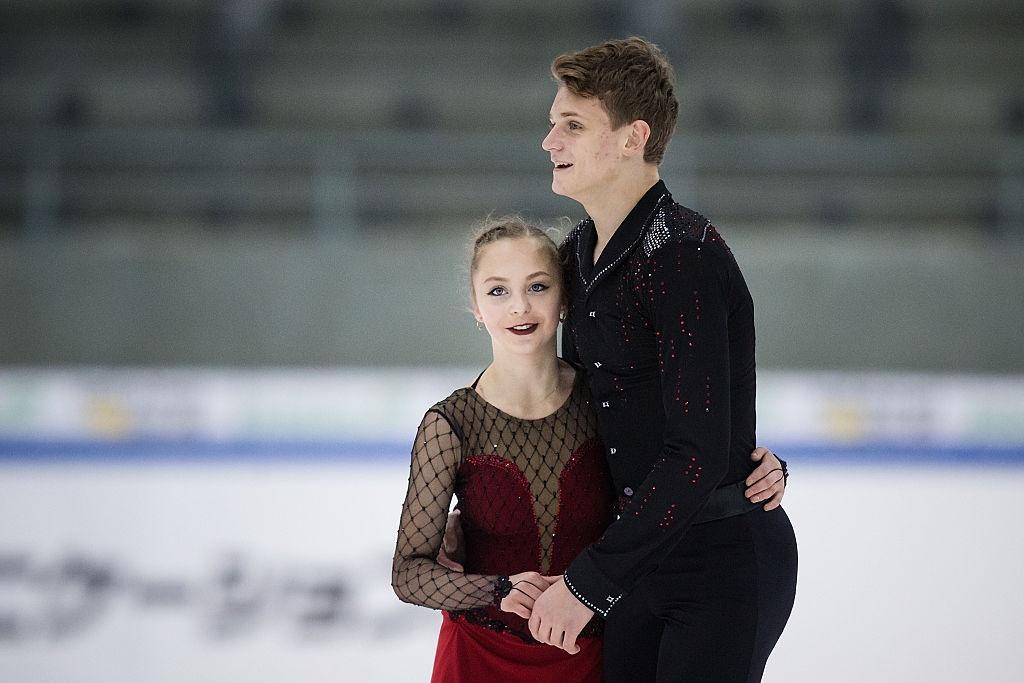 “That season, when we went to our first (Junior) Grand Prix events it wasn’t planned if I can say so. It just happened,” Dmitrii said. “We went for the first time to the test skates in Novogorsk right away basically – our team existed practically for half a year. There were other, accomplished pairs and we were the absolute newcomers. So the first half of that season with the Junior Grand Prix just developed in response to what happened. We didn’t know beforehand that we were going to Saransk, we learned about it two or three weeks before. And until the very last moment it was unclear if we would go to Dresden. In that season we just went with the flow that took us to the Junior Grand Prix Final,” he added. 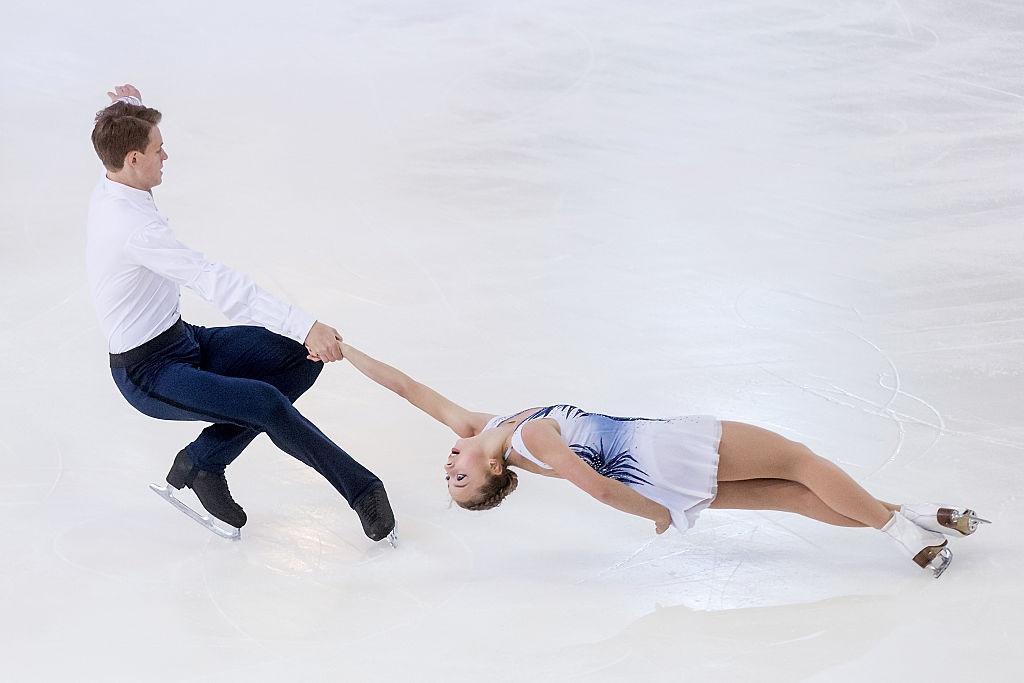 Looking back, the couple recalls the importance of the ISU Junior Grand Prix of Figure Skating series for the development of young skaters. “For any athlete this is the beginning of his path, they all are starting in juniors,” Kozlovskii pointed out. “There are very few that go straight to the senior level. Practically all the names that became big later on were already known in juniors. We got a chance that, by far, not everyone gets – the chance to show ourselves. The joy came from the fact that we, basically, right at the beginning of our career when we had been skating pairs for just half a year, already got the chance to show our work, our talent, our ability, our skills at the international level. That was great,” he continued. Boikova agreed: “For us it was a joy (to compete at the ISU Junior Grand Prix), because we did not have much experience and not many people knew about us. It was a joy for us that we were able to get to that level so quickly.” 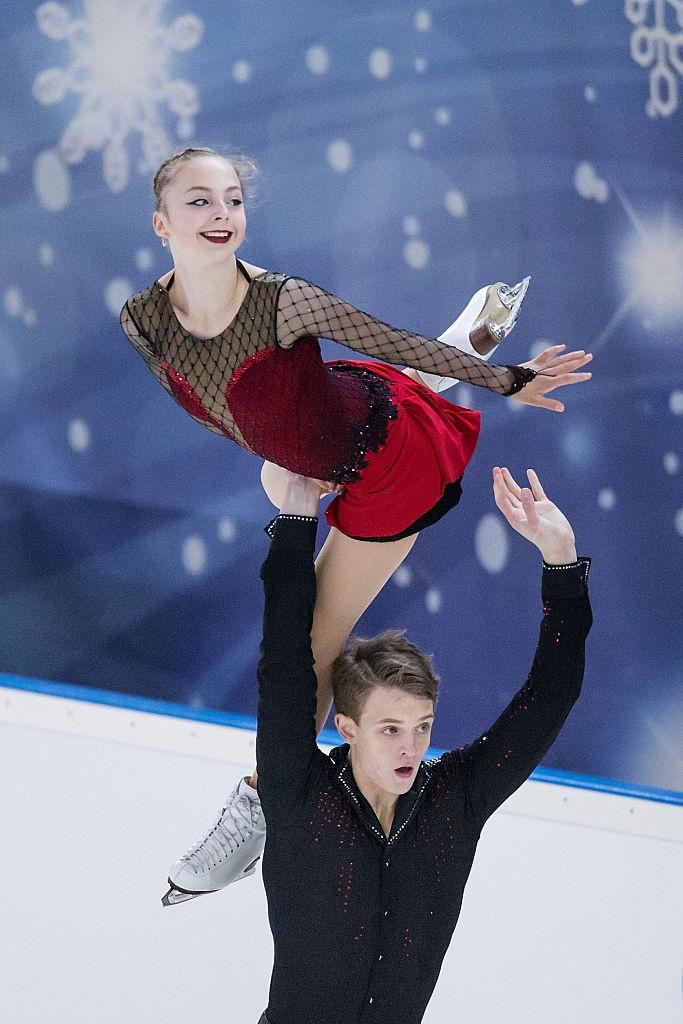 Boikova/Kozlovskii qualified for their first ISU Junior Grand Prix of Figure Skating Final with the silver from Saransk and a fourth-place finish from Dresden. This event was their first major international competition where they also met the top senior skaters. “I remember that this was the first time I saw Vanessa James and Morgan Ciprès live. At that time, I especially liked them in Pair Skating,” Boikova noted. “I was crazily happy that I was able to watch their skating live and meet them. After that I liked them even more, of course. Watching the senior Pairs motivated us,” she continued.

“This was our first big competition,” Kozlovskii said. “The Grand Prix Final in Marseille, this step on our way, meant for us the discovery of great Figure Skating. I was very impressed by Nathan Chen then. I went to the practice of the Single Skaters and I saw how he was reeling off his quads. And I was just swept away by the skating of Gabriella (Papadakis) and Guillaume (Cizeron, FRA). In that moment I saw for myself that Ice Dance had made a big step forward, because in my opinion, what they did was in my imagination a completely new way of dance. It is not the classical ‘man and woman’ but some kind of ephemeral mass that is floating over the ice as one unit.”

While Boikova/Kozlovskii were the newcomers at the beginning of the season, they were already top medal contenders for the ISU World Junior Figure Skating Championships 2017 in Taipei (TPE). “The second half of the season was already more clear. After the successful Russian Junior Championships, we knew that we were going to Junior Worlds,” Dmitrii said.

The team had a bronze medal from the ISU Junior Grand Prix of Figure Skating Final and the National Junior title under their belts when they headed to what would be their first and only appearance at the ISU World Junior Figure Skating Championships. The Russians took the silver medal. While Aleksandra still regrets some mistakes in the Free Skating, Dmitrii has special memories of the event. “Maybe it sounds strange, but in my consciousness this is one of the nicest, most memorable events even until now when we have some accomplishments. The atmosphere was friendly, there were many people that I know and people that we were socializing with. We might not have accomplished what we went for, we didn’t get the gold, but nevertheless there are only warm and nice memories.”

In the following, the 2017/18 season, Boikova/Kozlovskii continued at the junior level and on paper were top favorites for more medals and titles. However, the season did not go as well as they had hoped. While the team made it back to the ISU Junior Grand Prix of Figure Skating Final with two medals from the circuit, they finished off the podium in fifth place and then missed to qualify for the ISU World Junior Figure Skating Championships inside Russia.

“The career of any athlete starts with an ascent as you are always starting from zero – nobody knew you, you were nobody. In our first junior season, we experienced a certain ascent. Also each athlete that later can call himself a high-level athlete will go through a low in his career,” Dimitrii shared. “From there, there are two ways – either you are not able to overcome this and you will become a second-tier athlete, or you overcome that low. If you overcome it, you are getting to another level in your consciousness and mentality as an athlete. It is one thing when you became someone and another thing when you got something and lost it all. When you find the strength within yourself to return to that former level and even move forward, then you have a different awareness of what you have, of the work that you are putting in. In that moment, it was not easy for us to lose, and when you have something to lose, the relationship to your work and your career as an athlete becomes entirely different. It was a huge lesson for us and in a certain way even a present of life that we went through that at such a young age and at such an early stage of our career.” 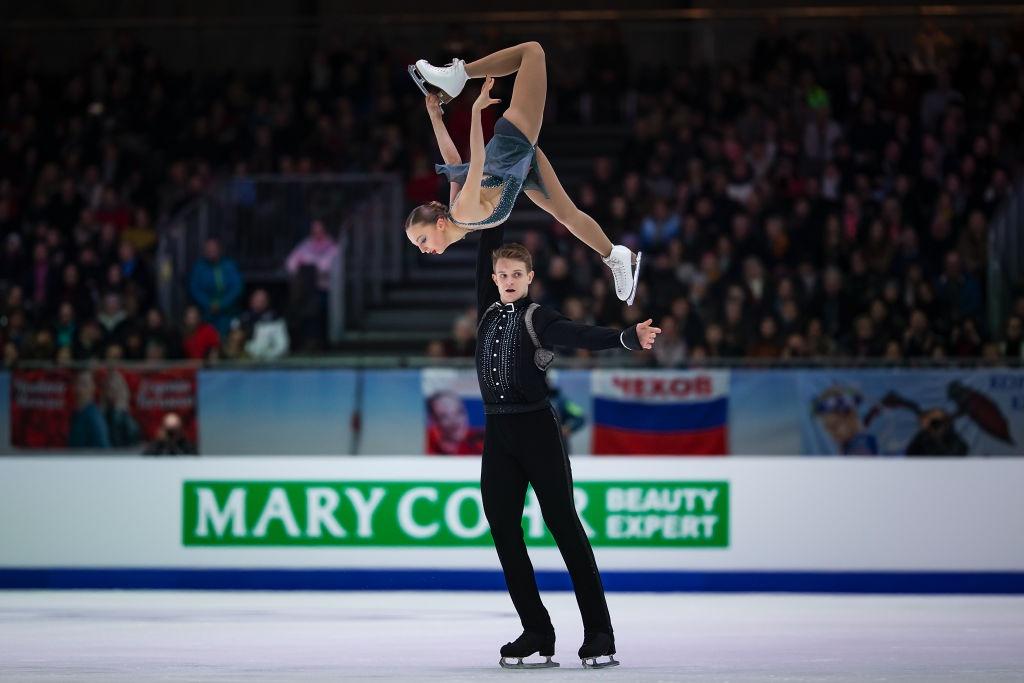 Boikova/Kozlvoskii then moved on to the senior level. “I didn’t make sense for us to stay in juniors,” Aleksandra noted. “It was the post-Olympic season, a new quad began and it was obvious, where everyone is headed. The path and the final destination of an athlete is clear. Therefore, we had to start this project, the new quad,” her partner elaborated.

After moving up to the senior level, Boikova/Kozlovskii still kept an eye on the next generation of pair skaters competing at the junior level. “Obviously you are not following juniors as much as when you were skating at this level yourself, but we are still following our kids, root for them, congratulate them to their success,” Aleksandra shared. “We are always happy about the success of our kids and support their success, because they are the ones that are coming after us,” Dmitrii added. “The most important thing is that we show a lot of respect for their hard work and efforts as we understand that what they are doing lays the foundation for the future success of Russian Figure Skating and the sport worldwide.” 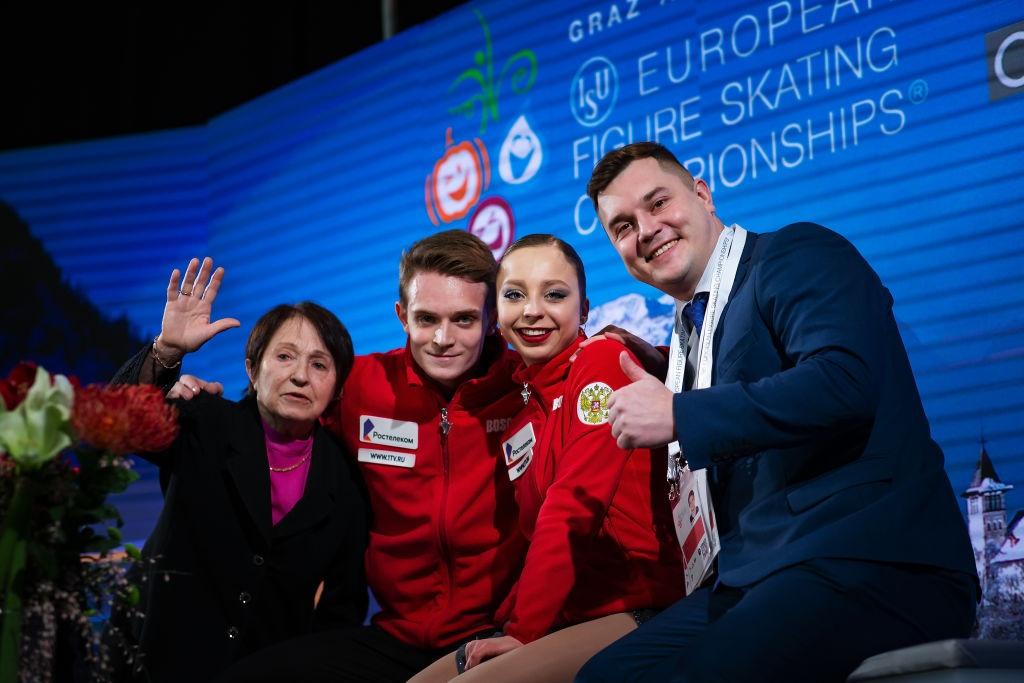 This season, the ISU Junior Grand Prix of Figure Skating series had to be cancelled due to the pandemic and Boikova/Kozlovskii have a message for the young skaters out there. “If a junior is a high-level athlete with a good prospect, he will get his chance to show himself,” Dmitrii said. “I am absolutely sure that life and fate will hand you that chance if you are working hard. The question is if you can use it or not. Maybe it is even not bad that the series was cancelled. I read that some kids had injuries and they would have needed to go into the season injured and not completely healed. Now they don’t need to rush their rehab, but they can recover and prepare for the most important part of the season. Maybe that is in their favor. As (coach) Tamara Nikolaevna (Moskvina) says - we need to go with what we have in this moment and try to fix the problem. This is a real grown up business-like approach. There is a problem, we just can ignore that problem and live without it. If it is so serious that we can’t avoid it, we need to find a way to solve this problem. Or if this problem cannot be solved, then we need to accept it, go through it and move on into the direction we’re heading to,” he concluded. 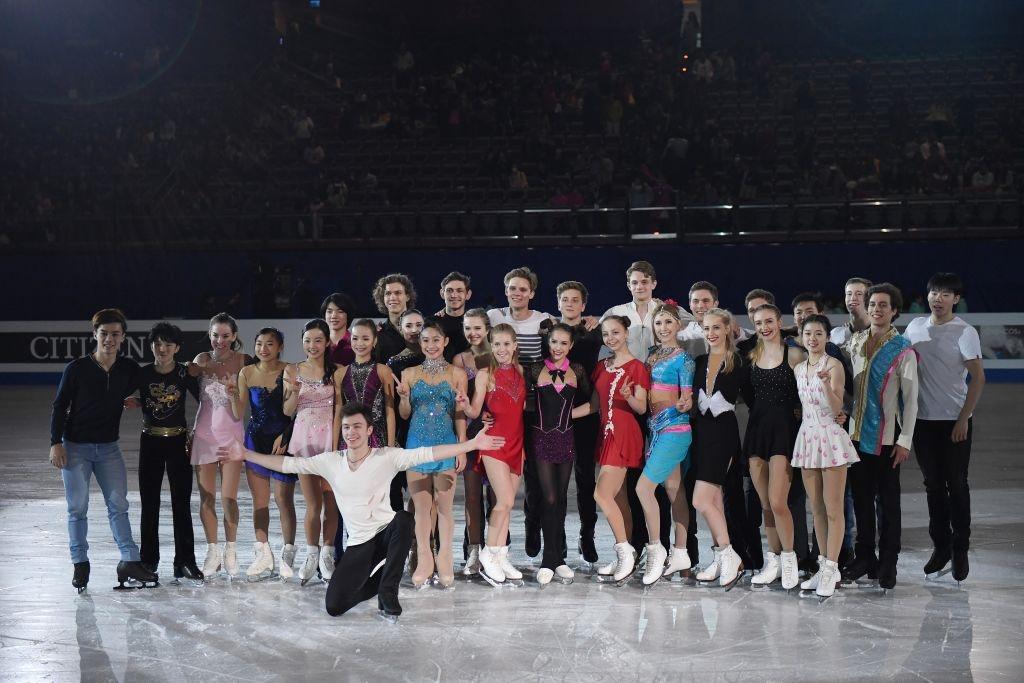 The ISU Junior Grand Prix of Figure Skating Series 2020/21 was cancelled due to the COVID-19 pandemic restrictions. Nevertheless, in the spirit of the #UpAgain campaign, Junior Skaters will take centre stage over the course of the next few weeks. The ISU World Junior Figure Skating Championships 2017, 2018 and 2019 will be streamed on the Skating ISU YouTube Channel, starting on September 5, 2020 at 12:00 noon (CEST). The full schedule is available here. Ted Barton will also be conducting exclusive interviews with some of the athletes who competed during the Championships and will be reviewing the programs of the top three contestants of each event.

Visit the #UpAgain Page to find out more about the campaign and its initiatives and subscribe to the ISU Newsletter to receive the latest information from the ISU. You can also subscribe to the Skating ISU YouTube Channel to receive notifications when live streams or new videos are published.