Japan’s Ice Dancers Misato Komatsubara/Tim Koleto have taken two huge steps towards their Olympic dream: They qualified a quota place for their country at the ISU World Figure Skating Championships 2021 in Stockholm (SWE) in March by placing 19th and American-born Koleto has received Japanese citizenship. The season had its challenges for the husband-and-wife-team as they were unable to return to their training base in Montréal (CAN) because of travel restrictions. Instead, they trained at home in Japan and in Colorado Springs, where Tim is originally from. 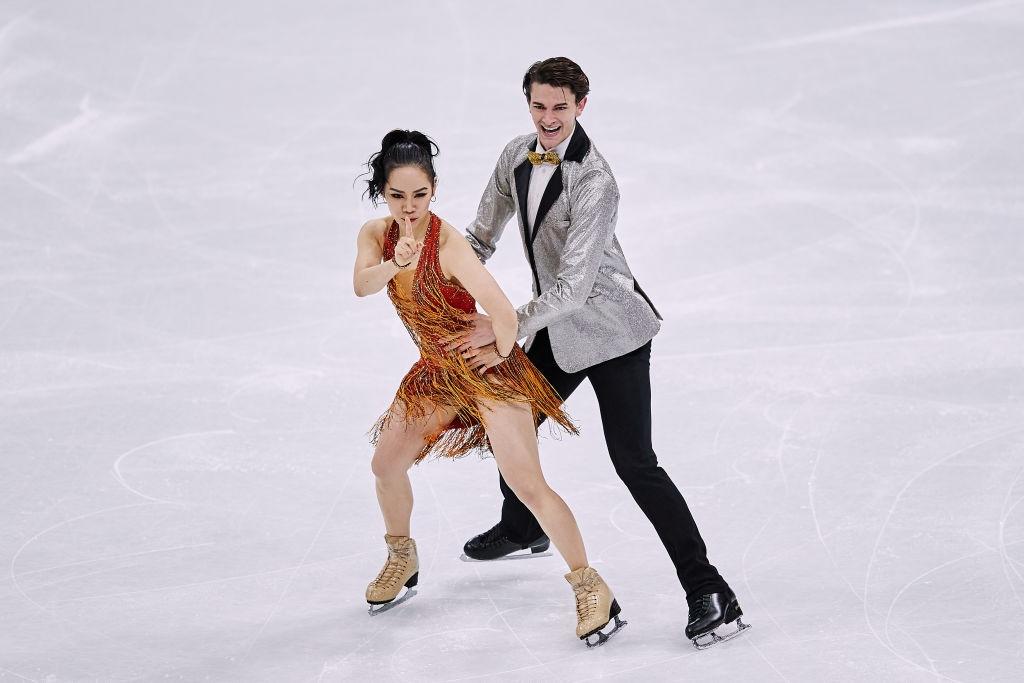 “The season was really full of kind of the yin and yang of difficult things, but also full of opportunities for us,” Koleto said. “(Last year’s) NHK Trophy was a big opportunity for us to get a result that we would not expect to get after five years in Ice Dance.” The couple won the gold medal in that domestic ISU Grand Prix of Figure Skating event ahead of their national rivals Rikako Fukase/Eichu Oliver Cho and Kana Muramoto/Daisuke Takahashi.

That was not the only plus for Team KoKo as they are called by their fans. “It was a great experience for us and also spending more time in Japan and being able to understand more of the culture and feel more at home here before going back out into the world representing Japan was a particularly important time for me,” he added.

Nevertheless, the Ice Dancers had to adjust to the new and different training situation. They were separated from their Montréal-based coaches since April 2020, for almost one and a half years. They mostly worked over the internet. “The distance was so much, between the nations, we can't get in, we couldn't have some competitions at the beginning of the season, but socially, we actually are getting closer,” Komatsubara pointed out. “It is still difficult to have remote coaching by Zoom. Somebody needs to film it, the music is sometimes off or the internet connection is bad and nobody has been in this situation in the past. I think we are learning a lot, and it is just going to help us in our future, to be more independent, to think for ourselves and take responsibility of our own success as athletes,” she continued.

Her husband agreed: “Working over Zoom has pros and cons. There’s the obvious difficulty of not being able to perceive depth or speed as easily, there’s troubles with sound and picture. But having your coach in your ear and giving corrections in real time through the headphones while you skate is almost magical. We’ve joked we should continue that when we return to in-person training.”

The Skaters also got some help from multiple Japanese Ice Dance Champion and two-time Olympian Cathy Reed in Japan and 2006 Olympic silver medalist Benjamin Agosto in the USA. “Now that we are Japanese Champions for three years it was so special to be able to hear the opinion and experience of Cathy who was seven times Japanese Champion and share her love for the sport together at a time that I think was quite difficult for her personally. It was a great opportunity to learn from her experience and we’re so grateful for the new connections that we made with Ben and with Cathy. Ben created such a stability and calmness for us in a time of panic pre-worlds after we were refused entry to Canada. He built our confidence and helped us trust the process and ourselves. There was no ego involved with anybody during the process, and I attribute our success last season to that.”

In spite of all the challenges that the pandemic brought, the Ice Dancers can find something positive. “Something about this situation really connected the whole skating world into one big family at the World Championships, just seeing everybody there in person again was so special,” Tim explained. “I hope that we continue that energy into the future.”

The other big event for the couple was that Koleto became a Japanese citizen last fall. “We had a lot of time to consider what it would feel like and we knew it's not something that happens very often. So first I'm very grateful but I was quite surprised actually how it felt when it really happened. It was one week before the NHK Trophy. So we were already in competition mode. I didn't have a lot of time to process my feelings. There was excitement, of course, but relief as well, the sensation that finally after so many years together we have a chance at every athlete’s dream,” Koleto, whose Japanese name is now Takeru Komatsubara, shared. “We've both been skating for more than 20 years, we've seen many talented Skaters not be able to have the Olympic opportunity because of something like this. And we’re just really grateful that we were able to get it in time. It might sound strange but in many ways we felt like now we have to work even harder, because now there is the real chance, the door is open; it’s time to walk through it,” he added. “At the World Championships it was very fun for me at accreditation to give the Japanese passport for the first time, to not require any clearance paperwork to compete. I was very excited for that moment.”

Acquiring Japanese citizenship is not easy. It is a long process and involves several tests. “I did two language tests that were required and an in-person interview that was around two hours. That's just me and the caseworker in the room alone,” Tim recalled. “And of course, they interviewed Misato after, but it didn't take quite as long.  And then on top of it, I did some regular proficiency tests just to show over the years that I had put in an appropriate amount of work. I feel maybe as a foreigner the level was appropriate. But now I feel like I need to keep studying Japanese as a citizen to function as an active member of society.” Actually, when speaking he sounds very fluent and his wife confirms that his Japanese is very good.

Misato recalled the citizenship test when the couple was interviewed separately to check if their relationship is real. “We had to do a separate test and they asked us about the color of the fridge. I said pink, he said white.” On their way home, the Skaters discussed the test and were confused. So what color is the fridge? “We go in the house and the front of the refrigerator is pink and the side of the fridge is white,” Koleto said, laughing. “We learned a very important lesson. Even though we spend our whole life together, different people have different perspectives and different experience. Both ways of seeing the fridge were actually true. Whenever we have moments on the ice and we have trouble understanding what's happening, we always remember, is this like the refrigerator - maybe both things are true.”

Meanwhile, the Ice Dancers have prepared two new programs for the season. “I am excited to do the Midnight Blues. It was the first pattern dance for us to do together,” Komatsubara noted. “In the past, the character was already there, but this time we try to make our own skating story or personal story on the ice.” They chose the songs “Le Freak” - “What You Won't Do For Love” and “You Make Me Feel (Mighty Real)” for their Rhythm Dance, all tracks from 1978.

Their new Free Dance is set to “Memoirs of a Geisha”. “Originally we had other plans for the Free Dance, but after thinking about our years of experience together, we wanted to choose a theme for the Olympic year that does the Japanese culture and art justice,” Misato explained. “We have worked with a Kabuki-performer to bring the program to life with authenticity and respect. Since it is the first time for us to skate to a Japanese theme, we are looking forward to show the audience a new side of us.” Both new programs were choreographed over Zoom. Romain Haguenauer did the Rhythm Dance and Marie-France Dubreuil did the Free Dance. Benjamin Agosto provided supplemental support during the creative process.

The Japanese Champions prepared mostly in Colorado Springs. “Of course, it is also my home town. We have a little more ice time for Ice Dance compared to Japan, so we were comfortable there. And Ben is a very qualified coach. So we were able to have someone with us more often as well as the smaller time difference with Montréal. It is just two hours,” Koleto pointed out. The Skaters finally were able to return to Canada to join their coaching team around Dubreuil, Patrice Lauzon and Haguenauer the first day the border to Canada re-opened for them on September 7.

In Focus: The best pictures of the ISU Junior Grand Prix of Figure Skating - Kosice (SVK)