Gabriella Papadakis/Guillaume Cizeron of France needed only one season to soar to the top of the Ice Dance World back in 2014/15. They came in with a 13th place in their ISU World Championships debut in 2014 and ended the year on the top of the World podium in 2015. Since this unprecedented rise, the French team never left the podium at any event anymore, collecting a total of four World and five European titles plus 10 ISU Grand Prix gold medals and two ISU Grand Prix Final titles. They are France’s hope for an Olympic gold medal in Figure Skating in Beijing and want to crown their career with this medal that eluded them in 2018 when they came a close second to Tessa Virtue/ Scott Moir (CAN). France will also be represented in the Men’s event with two entries, most likely Kevin Aymoz and Adam Siao Him Fa. 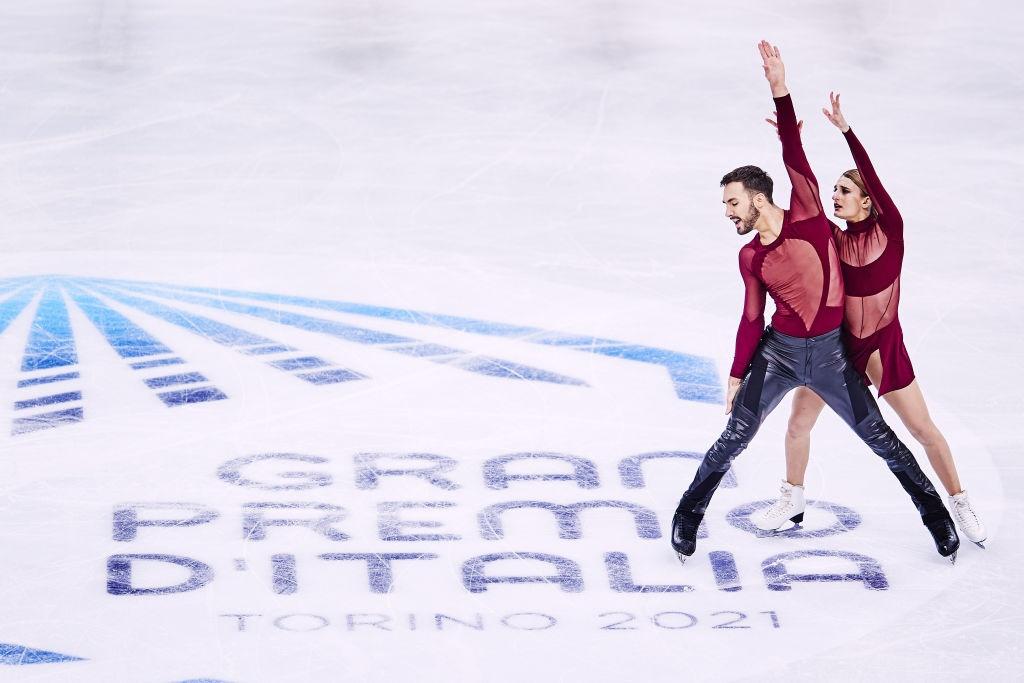 Papadakis/Cizeron did not to compete in the 2020/21 season that was heavily influenced by the pandemic. Instead of going to the ISU World Figure Skating Championships, they switched their focus and mindset to the 2022 Winter Olympic season. The four-time World Champions came back strong this fall at Finlandia Trophy, their first international competition in 20 months. Papadakis/Cizeron went on to win the ISU Grand Prix events Gran Premio d’Italia and Trophee de France. “It was good being back in competition, in front of an audience,” Cizeron said.

The new programs of the French stars were well received. For the Rhythm Dance, they chose John Legend’s songs “Made To Love” and “U Move, I Move” and introduced the dance style of waacking to the Figure Skating world. “We like to fuse styles. So this year for the RD we're doing waacking and some lyrical hip hop in the middle,” Guillaume explained. “We thought it would be an interesting combo with John Legend, who is a singer that we love. It's not necessarily the type of music where you would see waacking on, but we thought the rhythm really matched well and the message of the music also matched kind of the history of the dance.”

Gabriella shared that coach Marie-France Dubreuil told them about this dance style. “We liked it right away. We started taking classes with waacking specialists. And then she told us about all the movement and all the history and we both loved all the aspects of the dance, the cultural and historical one and the esthetical moves. Then we worked on having the style in our body, just learning how to perform it, a bit of improvisation, too. Then we started choreography off ice and on ice. “

Waacking is a form of Street Dance that originated from the LGBT community in Los Angeles in the 70s. Characteristic for waacking are rotating arm movements. “We had a few weeks of training off ice just learning the technique. It is a lot of brainwork, because it is a lot of coordination and then you have to coordinate it with the steps that we're doing on the ice,” Cizeron shared. “We went step by step, it was pretty challenging to learn a new style from scratch in a few weeks. Our goal was not just to have an influence of whacking, we wanted to be fully capable of actually dancing it. I wouldn't say that we're experts, but we got pretty good considering the amount of time we were given,” he added.

Papadakis/Cizeron had actually prepared a Tango Free Dance for the past season, but they never performed it in competition. “We wanted to add a more contemporary color to it and we worked on it for the whole season last year,” Gabriella noted. “At first we thought we're going to keep it for the Olympic season and then after a while we realized that it might not be what we wanted to do for an Olympic program. We loved the Tango, we loved the music, but it just felt like it wasn't enough and so we decided to use “Élegie” by Gabriel Fauré, that was a music that we had in mind for quite a while, especially Guillaume. We started playing it and pieces of the choreography made for the original Tango were fitting quite well. It was very interesting to play with that, we added more complexity to the Tango, more different colors, different emotions. It was richer and it just felt like it was bringing together all the energies that we wanted to skate to for an Olympic program. We've learned so much over the past years since the last Olympics that we wanted to express all that we learned and all what we became, in one program and I think that there are a lot of layers to the program, mostly it's about being all who we are, on the ice and just like showing, not hiding anything, just being what we are and not being scared of it.”

The French have been skating together since they are nine years old and they feel that this long partnership is one of their biggest strengths. “It just makes everything easier. We don't need to communicate that much, it's a dynamic that is established and it makes the work easy and the progress faster. I think, it is also something that the audience feels and is touched by,” Guillaume said.

On the other hand, this strength sometimes can be a weakness, as he pointed out: “After a while you kind of forget to communicate, because you think everything is so clear, but sometimes you have to remember that if you don't say something aloud, your partner is not supposed to just know, magically. So there are things that we need to communicate. The more we worked on our communication the more trust we can build and the more improvement we can make on the ice, artistically, technically, in every aspect.”

Papadakis/Cizeron said about their Free Dance that they are dancing their last tango, but in fact they have not yet decided about their plans beyond this season. “There are chances that this might be our last season, but I think it's more of a way to try and be really grateful for every moment that we're given to train, to perform”, Guillaume explained. “We like the idea skating like it's the last time, even if it's not, it's a way to enjoy every moment like it's your last. It just gives another level of gratitude and enjoyment and I think we also like the drama a bit,” he added with a smile.

“We might retire and then miss it and come back, we're open to all possibilities. So many skaters do that. We just wanted if this is our last season then I want to be at peace with the programs that we're doing,” Gabriella agreed.

While the dancers are approaching their second Olympic Games, teammates Kevin Aymoz and Adam Siao Him Fa will be at their first if their selection is confirmed. Kevin struggled with an injury in the summer and was not yet fully recovered during the Grand Prix season, but he put out an excellent Free Skating at the French National Championships and earned his fifth National title mid-December. Adam secured the second quota place for the French men at the Olympic Qualifying competition in Oberstdorf, Germany. He debuted at the ISU Grand Prix series this season and collected his fourth consecutive silver medal at Nationals, thus confirming his position as France’s number two man.

However, the French Women and Pairs were not able to get Olympic quota places. Multiple National Champion Maé-Bérénice Meité ruptured her Achilles tendon in the Short Program at the ISU World Figure Skating Championships 2021 and while she is on the comeback trail, she has not yet competed since her accident and had two withdraw from Nationals. “As much as I have improved in only two months, especially given where I started from, it just wasn’t enough to be ready for this event,” she wrote on Instagram. “I am already focused and looking forward to the second half of the season. Hungrier than ever. More motivated than I ever was, to be able to skate on competitive ice again.”

Lea Serna, a student of 2007 World Champion and former French skating star Brian Joubert, skated to her second National title, but she had missed to qualify an Olympic spot in Oberstdorf as did the Pairs. The new French Pairs Champions Camille and Pavel Kovalev and Serna should be selected for the ISU European and World Championships, though.