Vanessa James/Eric Radford (CAN) come back to make a difference

When a top skater comes out of retirement it is always an interesting story. And it is even more interesting when two top skaters come back and team up – which is what Pair Skaters Vanessa James and Eric Radford did. She is the 2019 European Champion and 2018 World bronze medalist with her former partner Morgan Ciprès, competing for France. He is a two-time World Champion, 2018 Olympic bronze medalist and Olympic Team Champion with Meagan Duhamel, representing Canada. He retired in 2018, her career with Ciprès ended in 2019, but in 2021 they decided to come back. Together.

It was an unexpected development even for the Skaters themselves. “When I retired and even up to shortly before I started with Vanessa, I would have never ever imagined that I would come back,” Radford admitted. “I truly felt my skating career is complete. It was just by luck and by chance that that opportunity came to skate with Vanessa. Originally, we just were thinking we could do shows together. We skated together very briefly at Battle of the Blades two years ago and kind of saw ourselves on camera and thought, oh, we look really good together. Vanessa came to Montreal and we skated together for a few days and at the end of like five days, we could do a triple twist and throw triples and we felt maybe we should show the world what we can do rather than just do shows. And that was when the idea of us actually doing competitions started.”

The couple began their season with Autumn Classics in Canada and Finlandia Trophy, then went on to compete in the ISU Grand Prix of Figure Skating finishing fourth at Skate Canada International and the Internationaux de France before ending the year with another fourth-place finish at the Golden Spin of Zagreb. “This season is really to keep learning, keep progressing,” Vanessa noted. “We've been progressing at a very high rate, it's just we don't have a lot of time. We want to keep growing and gaining momentum heading towards Nationals and the Olympics.”

Coming back is not that easy, even though James and Radford are very experienced Skaters. “It's all these new emotions, flooding back,” Vanessa said. “I think you kind of forget the adrenaline rush and how it feels in the nerves of doing a long (program) in front of an audience. It's been two years for me, it's been three years for Eric. We are feeling more and more comfortable, so it feels good, each time we step out there now, waiting for that moment when everything just comes together so we can really show what we are capable of.”

Radford revealed that elements like throws and jumps were actually easier than some other Pair Skating elements. “All of the difficult elements were the easy part. I think the back outside death spiral, figuring out how to do a level for Pair Spin (were especially difficult),” he said. “The rules have changed a lot since me and Meagan skated together. And then I think that learning to do the programs again and do the elements when you're fatigued (is hard). It's totally different than when you feel fresh. So I think that aspect is something that takes time,” he continued. “The muscle memory and the stamina is something that we needed to build again from scratch,” James agreed. “It's a learning experience each time we step out. But when we do our elements outside of the program, I think there are top quality. Now, we just need to keep that kind of belief I guess and build that in competition to really experience what our skating can look like.”

Then there is the pressure of expectations on this couple. When two such accomplished Skaters team up, people are expecting a lot of them – great programs, good results. “There's a lot of expectation because we are both accomplished in the sport and in this discipline. Just with our names and our success, I think it comes with the territory, but we're trying not to have expectations, but just goals and accomplish each one each time and build. It's a lot of pressure from the outside, so we're just trying to stay in our bubble,” Vanessa shared. “I think your own expectations can be your biggest hurdle to overcome,” Eric added. “You can become your own worst enemy in that regard and I think that is a big aspect of coming back to competition that we're learning how to manage those expectations that are coming from within ourselves. Our pasts do make it a little bit more difficult because all we have to compare is when we are at the very top of our game at the end of our careers. When we go out there and my most recent memory is winning bronze at the Olympics. I'm trying not to compare and go back to those moments because there were a lots of ups and down along the way with Meagan. I have to remember that. It wasn't always easy-peasy,” he pointed out.

And there is more to this comeback. “I have a very different perspective coming back than I did when I was competing before. Before I really needed to win, because we put so much time in it. It's kind of the only way I knew skating. And now both Vanessa and I are genuinely doing this for ourselves. We are doing this because of the way we feel. We are competitors and we would love to go out and win, have a medal and success, but when things don't work, I don't feel as negative as I did before. Our expectation is to go out there and show everybody how much we love to skate. Sometimes the elements are not going to work, we don't have as much time and experience together under our belts as all of the other teams. So to say that we're just going to go out and start winning everything is not realistic. We know that.”

When James and Radford decided to come back, they got a lot of positive feedback. “Every single person that saw the video and who I talked to said 'do it, go for it. If you feel that way, then do it’,” he said. “Of course, some people were like 'you're crazy'. Even me and Vanessa were like, we're crazy to even think that we're going to do this, but you only live once. If you have an amazing opportunity, take it. I'm not going to sit at home and not try to do something incredible and fun. If I hadn't pursued this, I would have totally regretted it.”

James/Radford decided to represent Canada as James had citizenship. The French Skating Federation did not put any obstacles into her way and released her. “It feels like the stars align, because I was born in Canada. I've never represented Canada before, but it was so easy because I had my passport already,” she pointed out. “Even when I was skating for France, when I came in front of a Canadian audience, it was like being at home. We had standing ovations, the commentators said that I was born in Canada, from Ontario, all of that. So I already felt the love from the Canadian crowd.” 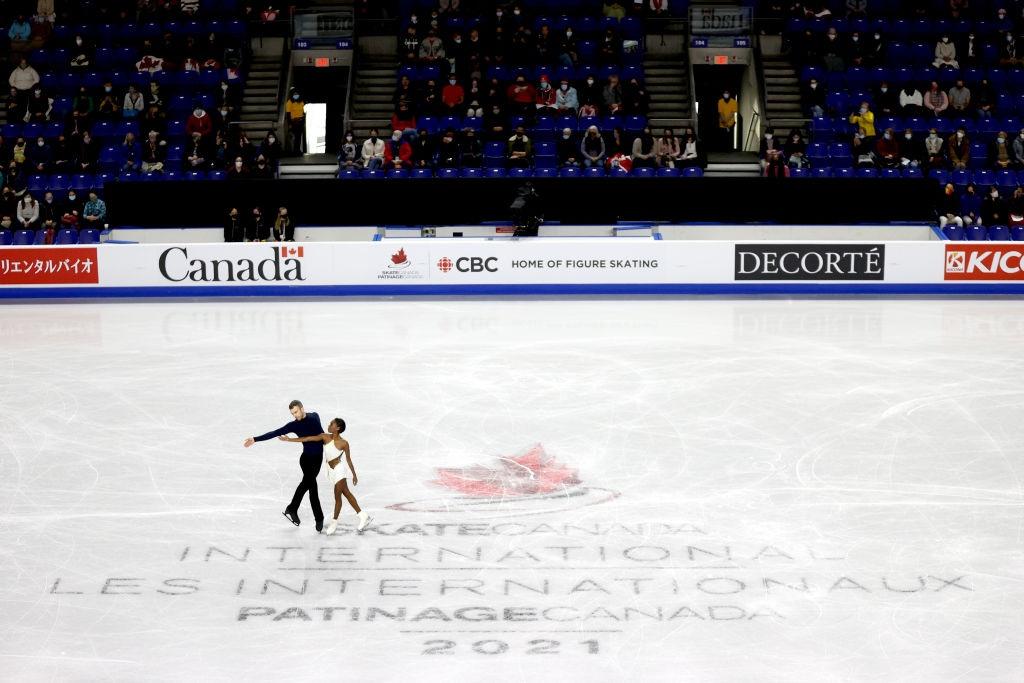 The Skaters are not sure yet how long they will pursue their project. Initially, they were just looking at this season with the ultimate goal to compete at the 2022 Olympic Winter Games in February in Beijing and the ISU World Figure Skating Championships in Montpellier (FRA) in March. “I think Worlds will be a really fun and special competition, being back in France. It has come up in conversation and I don't think we are totally closed to doing another season,” Eric shared. “Maybe a couple of months ago we were like, this season, that's it. Olympics, that's all I'm going to have motivation for. But as we continue to develop I think that we're starting to realize that being at our first season we're not going to get to show as much as I think that we can.”

Vanessa agreed: “We've made a progression. Yes, we both have experience, we have been skating for a long time with other partners and we both had success. We had to learn the elements, we had to change our technique, we had to master technique which we are still mastering and then perform. It's a lot together so quickly and there are teams that have come together quickly, but with two years without competing it's even more demanding. What we are asking from ourselves and what we are doing I feel is extraordinary. But with the rate of progression, I do feel like if we had another season, we could really showcase the potential that we have. Especially when we are in practice and how we feel in practice. We want to show that on the ice, but we need time, we need competitions and we need experience together,” she said.

The next step for this extraordinary Pair are the Canadian National Championships in Ottawa January 7-13 where they hope to earn a spot on the Olympic team. Canada has two spots in Pair Skating. There are three spots in Ice Dance, one in the Women’s and two in the Men’s that should be determined at the National Championship.

Reigning ISU World Ice Dance bronze medalists Piper Gilles/Paul Poirier are currently Canada’s highest ranked skaters and eye the podium in Beijing in the individual and team events. With ISU Grand Prix medalists Laurence Fournier-Beaudry/Nikolaj Soerensen and 2019 World Junior Champions Marjorie Lajoie/Zachary Lagha the country boasts a deep field in this discipline. The leading Canadian man is Keegan Messing, who finished sixth at the ISU World Figure Skating Championships 2021. In the Pairs, two-time ISU Four Continents medalists Kirsten Moore-Towers/Michael Marinaro are expected to battle it out with James/Radford for the National title. In the Women’s Madeline Schizas has had the best results so far this season.