In her ISU World Championship debut Anna Shcherbakova led FSR to a clean sweep of the Ladies podium in Stockholm (SWE) on Friday. Elizaveta Tuktamysheva claimed the silver medal six years after taking the World title while Alexandra Trusova climbed from 12th place to earn the bronze.

Skating to “Home of the Dark Butterflies” and “Beethoven’s Five Secrets”, Shcherbakova nailed a triple flip-triple toe, triple flip-Euler-triple Salchow, triple Lutz-triple loop and another triple Lutz. Her only error came when she missed her opening quadruple flip. The 2020 European silver medalist collected a level four for two spins and a level three for the footwork to score 152.17 points. She ranked second in the Free Skating but overall remained in first place at 233.17 points and gave herself the best possible present for her upcoming 17th birthday on Sunday.

“Honestly I don’t know what to say after my performance, I really tried to do my best and fight for every element. I am not satisfied at all with my performance but I’m so happy I’m first, it was my goal”, Shcherbakova said. “It was a real fight for me because from the first element everything was not like I wanted, but with each next element I understood that now I can try to do best on every element and not lose points. It’s probably the best birthday present that I couldn’t imagine.”

Tuktamysheva opened her Japanese-inspired routine to “Chronicles of a Mischievous Bird” with a triple Axel-double toeloop combination. She followed up with another triple Axel and four more clean triples, but she fell on an under-rotated triple flip. The 2015 World Champion scored 141.60 points for her Free Skating and totaled 220.46 points to return to the World podium in Stockholm – the city where she won her European title in 2015. 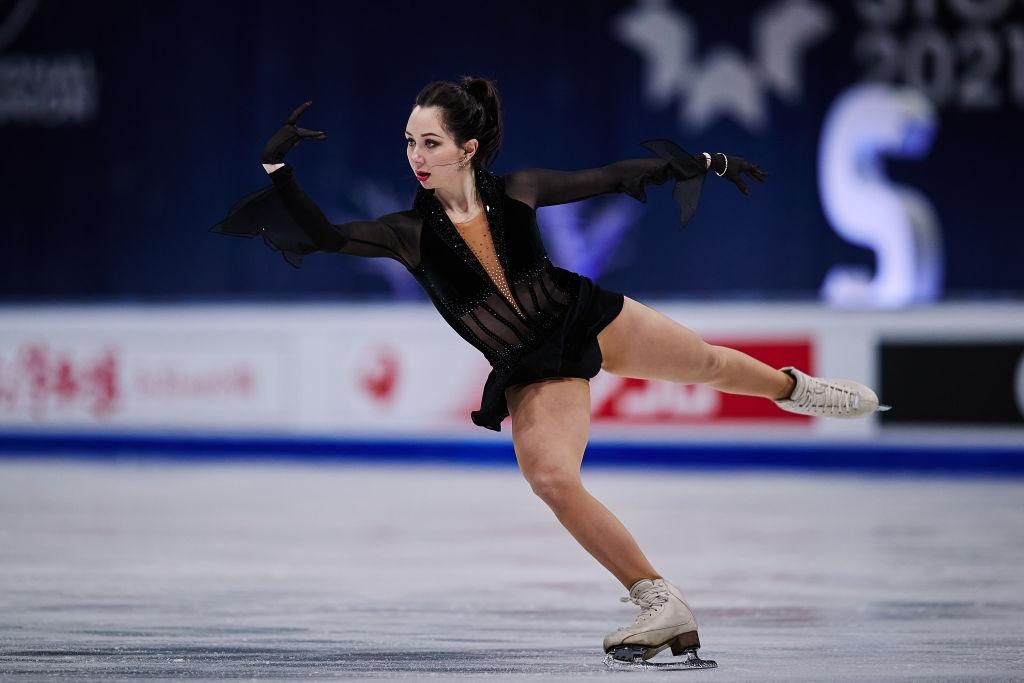 “The feeling is amazing. I didn’t want to think about the placement nor podium when I was going here, but deep down I was hoping that perhaps after all I’ll medal and when it happened the emotions are incredible. I am so happy and am so in peace with myself now -  I did all I could and am second”, Tuktamysheva shared. “The next goal is just to make it to the (Olympic) team just like I did to Worlds.” 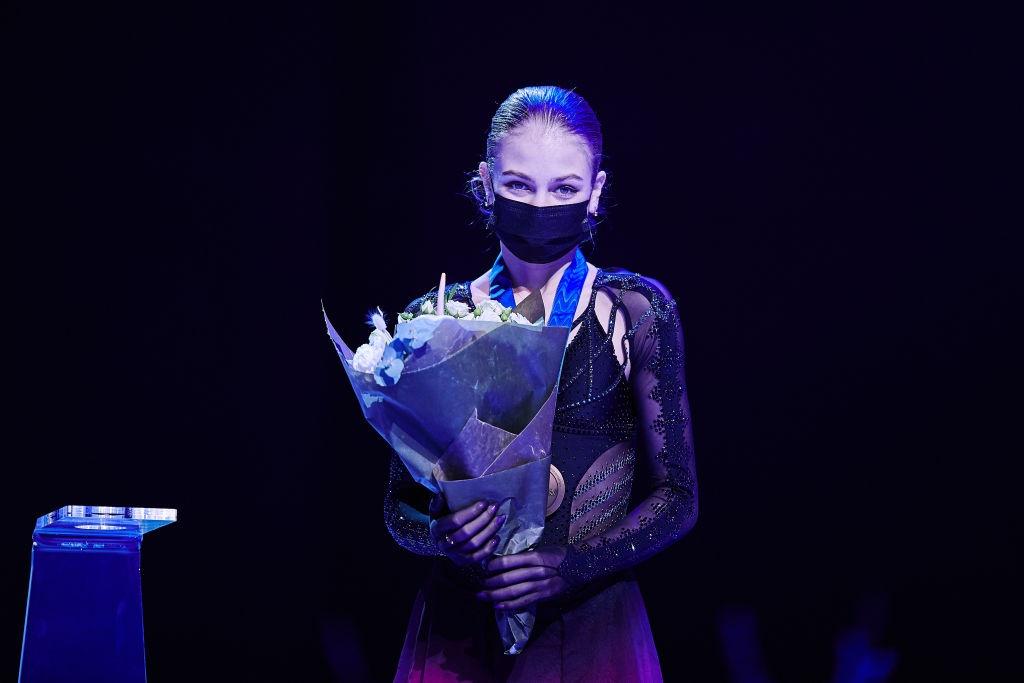 Trusova, who had nothing to lose, risked it all in her program to “Romeo and Juliet”, and went for five quadruple jumps. The two-time World Junior Champion landed a quad flip and quad Lutz-triple toe combination, however, she fell on the quad Salchow and the second quad Lutz. The quad toe was not clean and downgraded. The 2020 European bronze medalist won the Free Skating segment with 152.38 points and accumulated 217.20 points overall to win the bronze in her World Championship debut. 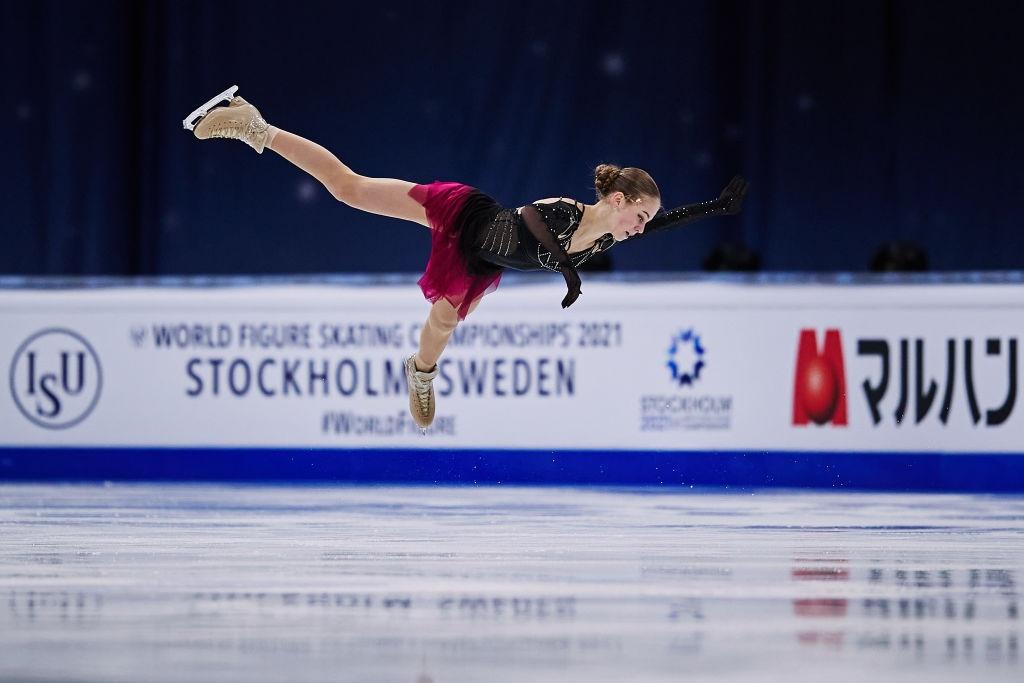 “I am happy that I was able to move up from 12th place after the short program to the podium, but of course am not satisfied with my performance. I wanted to do five (clean) quads, again I was unable to today. I will try to do better next time,” Trusova noted. 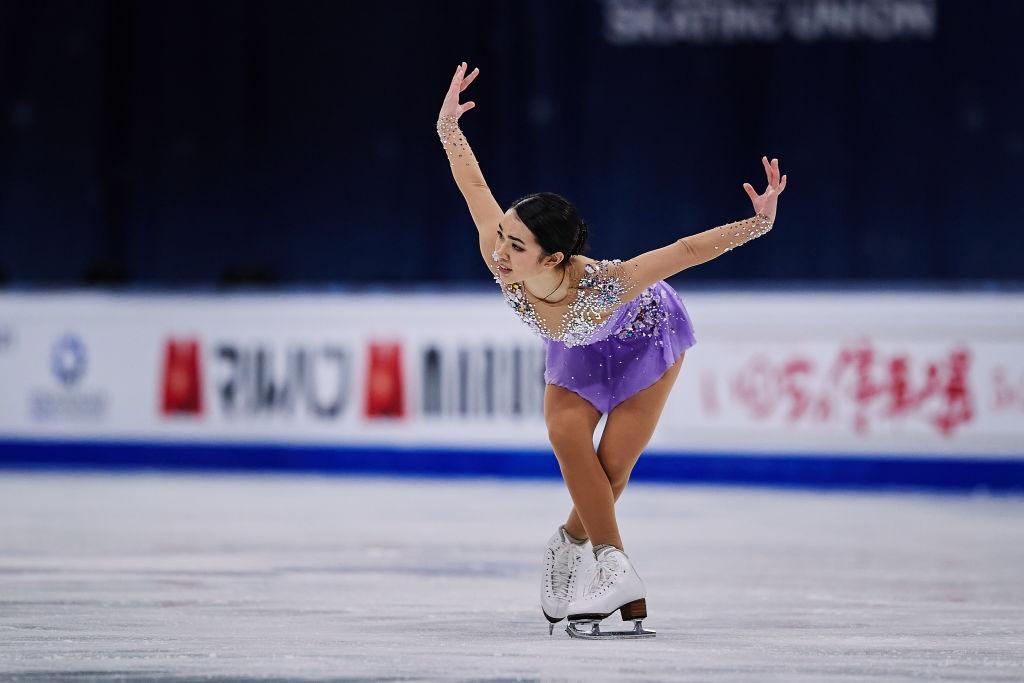 Karen Chen (USA) remained in fourth place with a solid skate to “Butterfly Lovers“ (208.63 points). The standings shuffled quite a bit. Loena Hendrickx (BEL) moved up from 10th to fifth with a strong performance to “Fever” (208.44 points). Kaori Sakamoto (JPN) slipped from fifth to sixth at 207.80 points. Rika Kihira (JPN) dropped from second to seventh after some errors (205.70 points).