ISU World Champion Shoma Uno of Japan fought back in the Free Skating to score a runaway victory at the Grand Prix NHK Trophy. Teammate Sota Yamamoto collected the silver medal while Korea’s Junhwan Cha rose from sixth to earn the bronze.

Uno, who stood in second place following the Short Program, came out with determination and hit his quad loop and quad Salchow right out of the gate. Skating to “Air on the G String” and “Sanctus Petrus Et Sancta Maria Magdalena” he then doubled the planned quad flip but recovered instantly to reel off two quad toes and two triple Axels. The current Olympic bronze medalist posted a season’s best of 188.10 points and racked up 279.76 in total to take his second Grand Prix gold in the season and eighth overall.

Yet, the World Champion was not completely satisfied with his performance. “This time there were mistakes in the short program but the other things I did well,” he explained. “The Free Skating was not that great in this regard. Of course, I had to get the points with my jumps, I was skating for the jumps today.

“When it comes to the transitions, there were a lot of omissions and I have to apologize to the choreographer, because there were so many things I could have done, but I couldn't today. It was all about the scores today. In Figure Skating the transitions and everything else is also important, that is the beauty of the sport. I want to deliver the whole package.”

Overnight leader Yamamoto produced two quadruple toeloops and a quad Salchow in his program to Sergei Rachmaninov’s Piano Concerto No.2, but crashed on his two triple Axels. The Grand Prix de France silver medalist finished sixth in the Free Skating with 161.36 points but hung on to second place at 257.85 overall.

“I was last to skate, and I had practised that, but maybe I was just thinking about unnecessary things like where I stand right now and that might have affected my performance,” Yamamoto admitted. “I was overthinking it after the fall on the triple Axel that I planned in combination, and I wanted to make up for this mistake.” 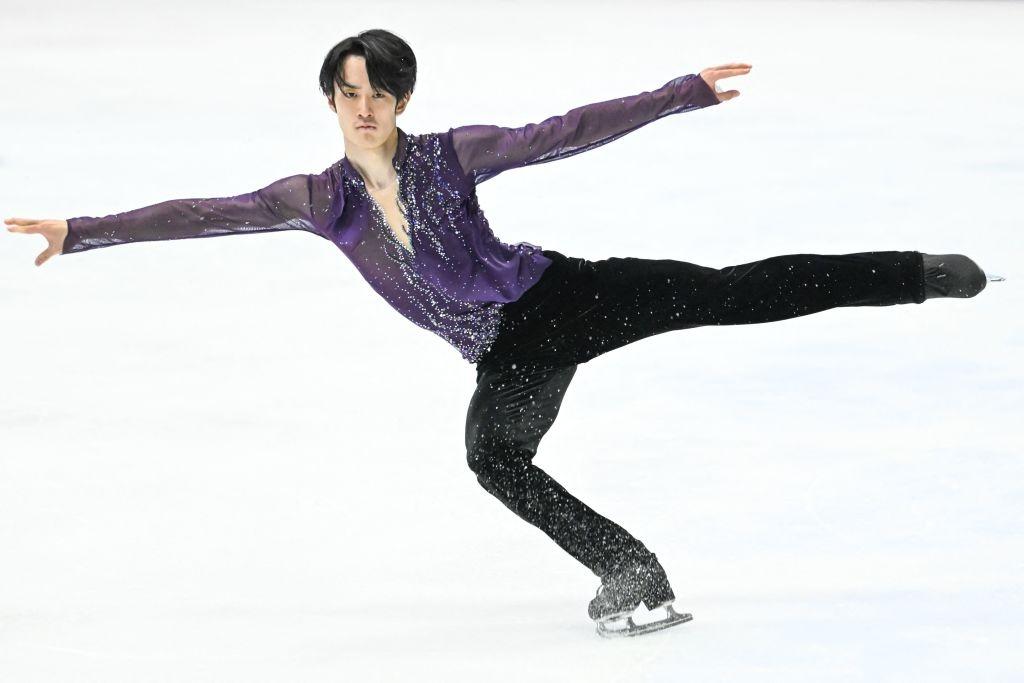 Overnight leader Sota Yamamoto (JPN) had to settle for silver after 'overthinking' his routine. © ISU

Cha put out an inspired performance to “No Time to Die” from the James Bond soundtrack that included a quad Salchow, quad toe as well as five clean triples. He only underrotated his triple Axel-Euler-triple Salchow combination. The 2022 ISU Four Continents Champion picked up a season’s best of 174.41 points and ranked second in the Free Skating segment, moving up three spots to take his second ISU Grand Prix bronze medal this season with 254.76 points.

“After the very disappointing Short Program I was quite satisfied with my performance today,” Cha said. “It was hard, I had to work a lot today and I fought through my program.”

Kazuki Tomono (JPN) remained in fourth place (251.83 points) while Adam Siao Him Fa (FRA), who slipped from third to fifth on 250.45, still has a chance to reach the Final depending on results at the last ISU Grand Prix event of the season in Espoo, Finland, next week.

Overview of the competitors

Reigning ISU World Champion Kaori Sakamoto (JPN) is the hot favorite, but she has to watch out for teammate Rinka Watanabe who came out of nowhere to beat her earlier this season at the ISU Challenger event Lombardia Trophy. Both women won their first ISU Grand Prix and aim at making the Final. Grand

Schedule of the event

The schedule is as follows:

The NHK Trophy in Sapporo (JPN) November 18-20, 2022, is the fifth of six events in the ISU Grand Prix of Figure Skating Series.

More than 150 Skaters/Couples representing 29 ISU Members have been invited to the Series. The maximum number of entries for each event is 12 Ladies, 12 Men, 8 Pairs and 10 Ice Dance couples.

In order for a Skater/Couple to be eligible to compete at an ISU Grand Prix event, a minimum total score must have been achieved in the 2021/22 or current 2022/23 season in an ISU event (Grand Prix, Junior Grand Prix, Championships) or a Challenger Series event. Exceptions apply to host country Skaters, previously ranked Skaters or split ranked Couples who return with new partners. The minimum total score is 3/5 of highest score per discipline at the ISU World Figure Skating Championships 2022 and are as follows: Women: 141.65, Men: 187.49, Pairs: 132.65, Ice Dance: 137.89.

The schedules of each ISU Grand Prix of Figure Skating events are available below: