Highlights from the ISU Grand Prix SHISEIDO Cup of China

Ice Dance National Champions Shiyue Wang/Xinyu Liu (CHN) produced two beautiful and very different programs. In the Rhythm Dance they took the role of Charlie Chaplin and put out an entertaining dance. Wang/Liu showed a completely different side of themselves in the dramatic Free Dance to “Black Swan”, the soundtrack by Clint Mansell based on Petr I. Tchaikovski’s immortal “Swan Lake”.

Wang/Liu have kept these programs from the past season and feel they have grown. “Technically we have not changed much, but we feel like we have more control of the program and we know where to express our feelings and we feel we became more experienced with the programs,” Wang said.

Silver National medalists Hong Chen/Zhuoming Sun (CHN) chose a lyrical theme with “I Will Wait For You” from the “Umbrellas of Cherbourg” soundtrack for the Free Dance. Wangqi Ning/Chao Wang (CHN), who took the bronze medal, were especially delightful to watch in their “Mary Poppins” Rhythm Dance.

“Golden boy” Boyang Jin (CHN) nailed his impressive quad Lutz in the Short Program and Free Skating. He continues to challenge himself not only technically, but also artistically. The Short Program is set to “Trio in D” and “Mechanisms” by Kirill Richter. “This is a challenge for me, it is a modern piece of music. The tempo of the program was slower than before,” Jin shared. He chose a faster piece of music in the Free Skating with “House of the Rising Sun”, which is also something new for him. “The long program is about finding your path through difficulties,” he explained.

Han Yan (CHN), who had started his comeback last year with a silver medal at Cup of China, found himself in the same position again and put out two inspiring performances to “A 1000 Years” in the Short Program and “La La Land” in the Free Skating. “I wanted to prove to the audience that I love skating. I enjoyed the competition and I wanted the audience to enjoy my programs,” said. “Technically I didn’t do anything too difficult, I did no quads, but maybe in the future I’ll do them,” he added.

Yudong Chen (CHN), 16, came just out of juniors to claim the bronze medal in his debut at an ISU senior-level Grand Prix of Figure Skating event. He convinced with two strong performances and showed a lot of promise. “This was my first competition with the senior-level skaters and I have learned a lot. I hope to increase the level of difficulty of my program in the future,” the teenager said.

Pair skaters Cheng Peng/Yang Jin (CHN) left an excellent impression with their new Short Program to “Somewhere in Time” and also in their Free Skating “Cloud Atlas”, showing off a high class of pair skating elements such as lifts and throws.

“We performed our new short program for the first time in competition. We just finished the program two months ago and we still continue working on it, making some changes,” Jin explained. The team had kept the Free Skating from last year.

“Also, since we skate this program for the second season, we feel more experienced with it. We have not changed it because of the pandemic but also because we felt we did not yet show the full potential of this program. It feels different from last year,” Peng said.

Hongyi Chen (CHN) stood out in the Ladies event and scored a runaway victory with 38 points to spare. The 18-year-old was especially happy to present her new Free Skating to the Chinese song “I Have the Strength to Fly”. “I am using this kind of style for the first time and this is something I wanted for a long time. My choreographer Lori Nichol chose the music.”

Silver medalist Angel Li was just happy to be at the first ISU Grand Prix of Figure Skating event of her career. “It was a great experience and I am very happy to have this unique opportunity. I tried my best and I told myself to relax and to enjoy,” she said. 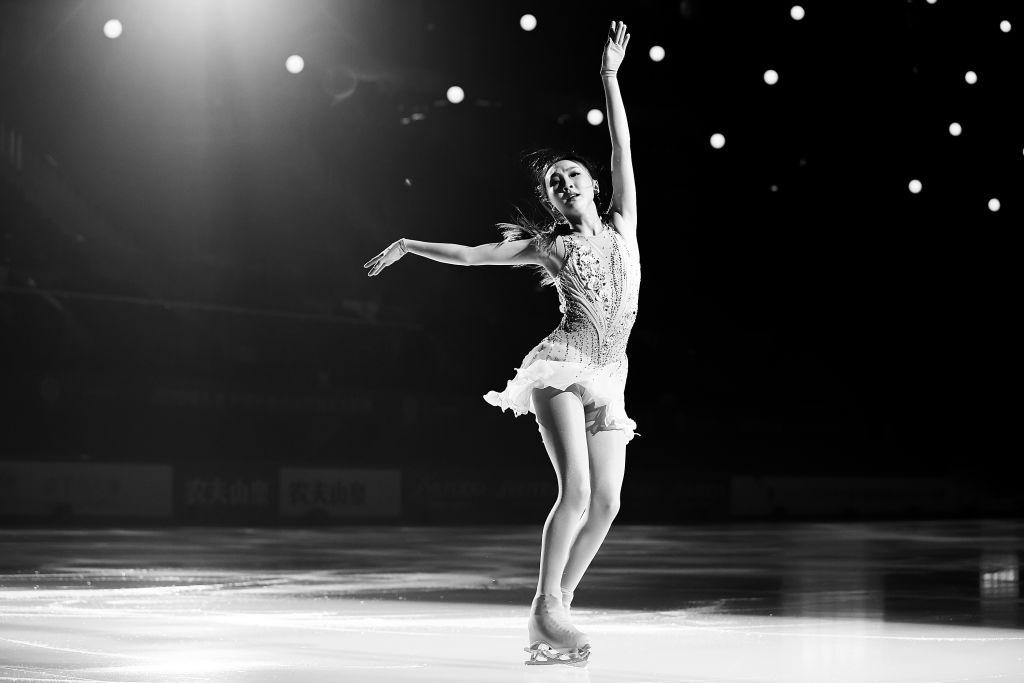 Following a decision of the ISU Council due to the ongoing Covid-19 pandemic and travel restrictions, the ISU Grand Prix of Figure Skating events are primarily domestically run events with domestic skaters and skaters who train in the host country or respective geographical region competing. At the SHISEIDO Cup of China, only Chinese athletes competed.

The ISU Grand Prix of Figure Skating Final that was to be held as an Olympic Test Event on December 10-13 has been postponed. The ISU, in consultation with all stakeholders and considering the pandemic developments, is evaluating the continuation of the 2020/21 season, in particular the re-scheduling possibilities for the important Olympic Test Events.

In Focus: The best pictures of the ISU Grand Prix of Figure Skating - SHISEIDO Cup of China

Hongyi Chen (CHN) in a class of her own in Chongqing