GlebLutfullin (RUS) had sat out most of the past season as he struggled with injuries and illness, but now celebrated a golden comeback in Krasnoyarsk. The 17-year-old from St. Petersburg sat in second following a strong Short Program that featured a triple Axel, triple Lutz-triple toe combination and a triple flip, edged by Artem Kovalev (RUS) by a little over one point. Performing to “Mala Luna” in the Free Skating, Lutfullin landed a somewhat shaky quad toe, a quad Salchow-double toe and a quad Salchow plus a triple Axel-Euler-triple Salchow and triple loop-double loop to move up to first place at 230.42 points. He set personal best scores in both his Short Program and Free Skating. “Before this event and when I came here, I focused on winning, because I was third at the ISU Junior Grand Prix in Lake Placid and I really wanted to win,” Lutfullin shared. “The past season was not easy for me, I competed only three times. I was sick and I had problems with my back. I thought a lot about my future, but I never wanted to quit skating.”

Teammate EgorRukhin had like Lutfullin one bronze medal on his record from the ISU Junior Grand Prix in Brisbane in 2017. The Muscovite ranked third after a clean Short Program and delivered again in the Free Skating that included a quad toe, two triple Axels and four more clean triple jumps to pull up one spot on 223.29 points. 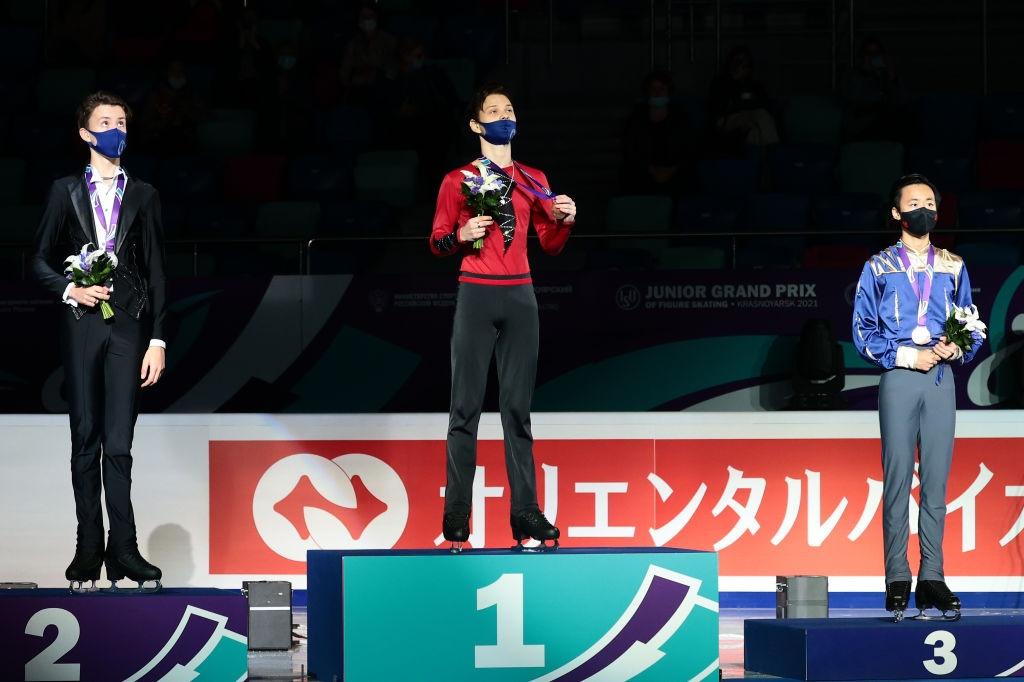 Wesley Chiu’s (CAN) triple Axel in the Short Program was a bit wobbly and he finished third in the segment. The 16-year-old from the Vancouver area produced a quad toe in the Free Skating and earned the bronze – his second medal after taking gold at the second event in Courchevel. Overnight leader Kovalev made some errors and dropped to fourth place.

Sofia Akatieva scored a runaway victory with almost 27 points to spare and spearheaded the second podium sweep of the Russian Junior Women this season. She was joined on the podium by Anastasia Zinina and Sofia Samodelkina. All three medalists landed quadruple jumps. Akatieva started well into the competition with a triple Axel-triple toe, double Axel and triple flip in her routine set to two pieces by Ezio Bosso. In her Free Skating to the “Mulan” soundtrack, the 14-year-old reeled off a triple Axel, quad toe-triple toe, quad toe-Euler-triple Salchow and three more triples as well as a quad Salchow, but she touched down with both hands on it. The Muscovite netted 233.08 points.

“However, I skated with some mistakes and so when we get back to Moscow, we’ll start to fix them right away,” Akatieva pointed out. “I did my program for the first time with this kind of content. At first, we skated with the triple Axel and two quad toes, then I started to recover the quad Salchow three weeks ago and I got it quite fast, so we decided to try to put it into the program,” the Skater explained. 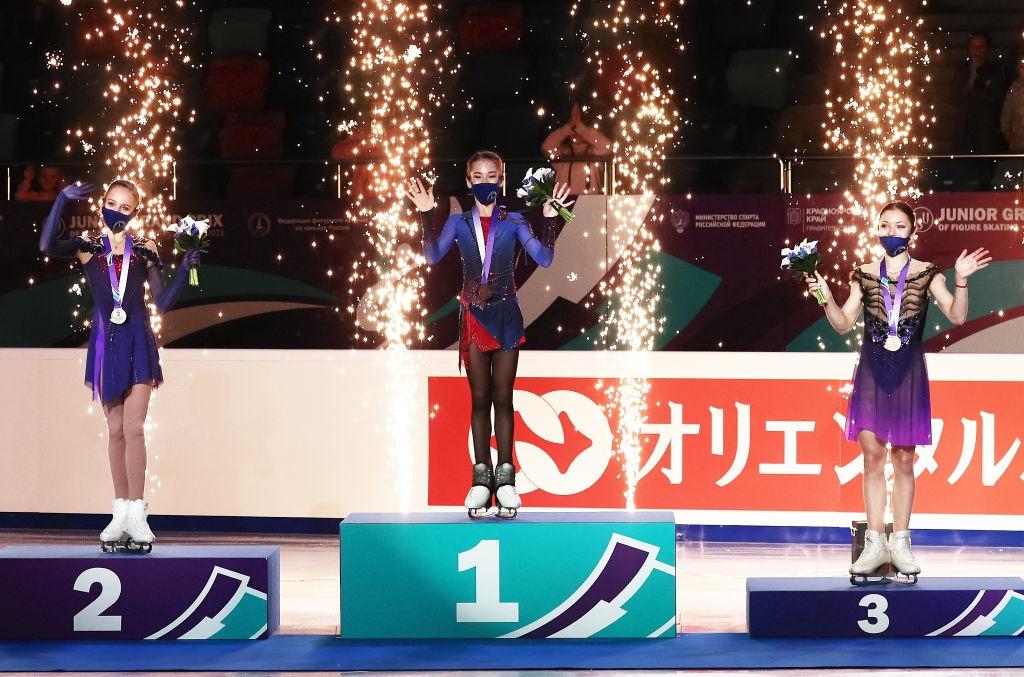 Zinina had stepped out of the double Axel in the Short Program and stood in third place. The 14-year-old hit an excellent quad toe-double toe as well as five clean triples, she only stumbled on her solo quad. Zinina ranked third in the Free Skating but overall moved up to second place at 206.20 points. Samodelkina took a hard fall on the triple Axel in the Short Program and finished sixth. The Muscovite opened her Free Skating with a quad Lutz that was slightly underrotated (q) and followed up with a nice quad Salchow and another, slightly underrotated quad Salchow (q)-double toe combination. The 14-year-old earned 202.39 points overall to come third.

The Pair Skating team of Ekaterina Chikmareva/Matvei Ianchenkov (RUS) skated off with the gold medal in what was their first international competition. Russian Pairs occupied the whole podium with Natalia Khabibullina/Ilya Knyazhuk coming second ahead of Ekaterina Petushkova/Evgenii Malikov.

Chikmareva/Ianchenkov led following a flawless Short Program to the “Crimson Peak” soundtrack by Fernando Velazquez. As “Bonnie & Clyde” in the Free Skating they impressed especially with their huge triple twist, throw triple Salchow and loop as well as with a triple Salchow, triple toe-double toe-double toe and five level-four elements. The couple from Perm racked up 189.11 points. “This is our first major competition and we think for the first time it was not bad. We were not very nervous, it kind of felt like other competitions we have done,” Chikmareva noted. “There is always room for improvement, no limit for perfection, so we will continue to work on everything,” she added. 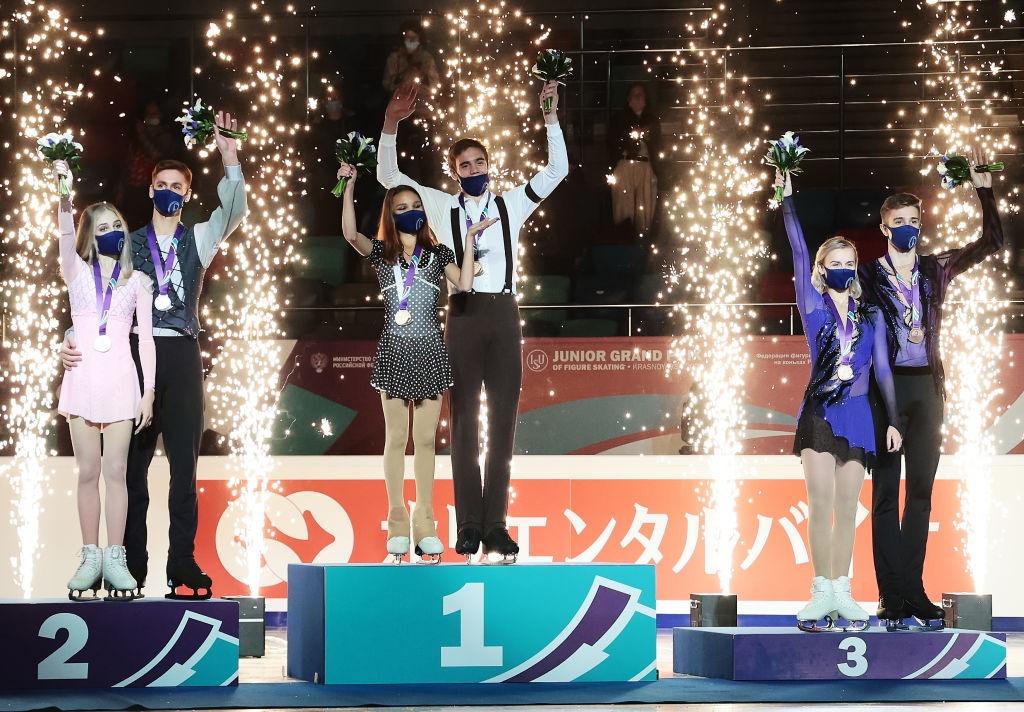 The silver medal went to Natalia Khabibullina/Ilya Knyazhuk who put out a solid Short Program and went for very difficult side by side jumps in their Romeo and Juliet Free Skating with a triple Lutz-Euler-triple Salchow combination and a triple loop, but the jumps were slightly underrotated (q). The Muscovites earned 183.87 points.

Petushkova/Malikov had a good Short Program but made an error on the double Axel-double toe combination and on the throw triple loop in the Free Skating to score 170.46 points.

Khavronina/Cirisano took the lead in their upbeat Rhythm Dance to Jazz and Blues from the “Babylon Berlin” soundtrack. They picked up a level three for the Blues Pattern Dance and the rotational lift while the twizzles were graded a level three and four and the midline step sequence was a level two. The 2020 Youth Olympic Games Champions delivered a modern Tango interpretation in the Free Dance and collected a level four for the twizzles and the straight line lift while the other elements were a level three. However, they did not receive credits for their choreo step sequence, which cost them about three points. The couple from Odintsovo ranked second in the Free Dance segment but overall remained in first at 167.31 points. “Of course, we are not completely satisfied, because as athletes we are maximalists and we wanted to win both programs,” Khavronina noted. “This is only the beginning of the season, therefore we are still breaking in our programs and we will improve with each competition. Overall we are positive about this event,” Cirisano said. 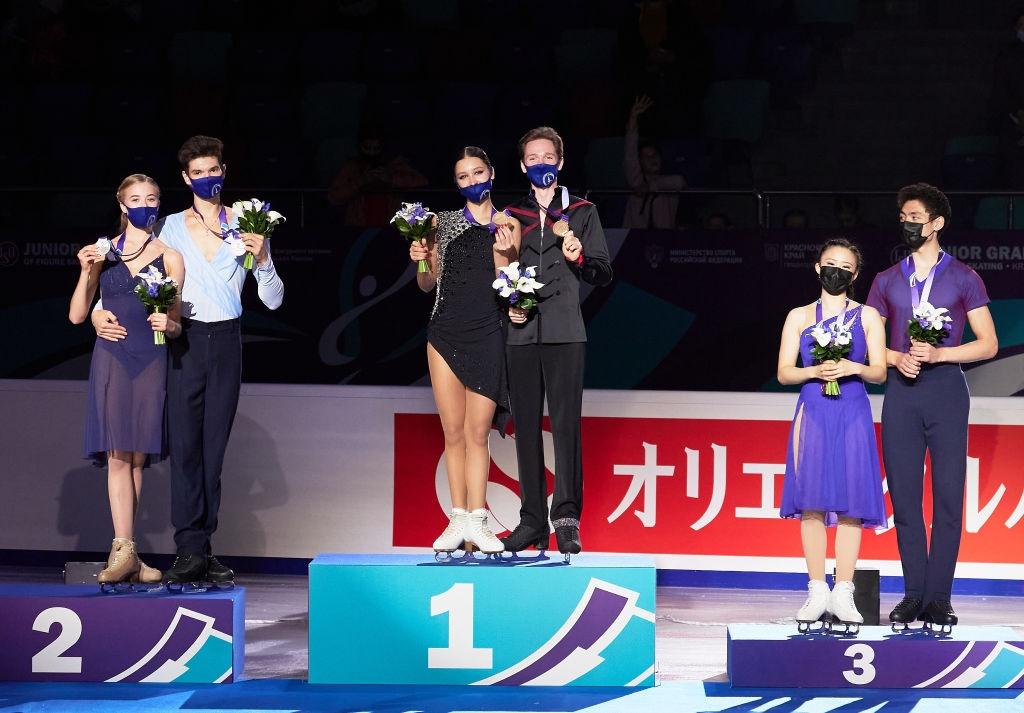 Leonteva/Gorelkin produced a level-four stationary lift and level-two and three Blues Pattern in the Rhythm Dance. Their Free Dance to a cover version of “Imagine” by John Lennon included three level four elements and they ranked first in the segment. Overall the Muscovites accumulated 165.14 points.

Ling/Wein placed third in the Rhythm Dance and had the highest technical element score thanks to four level-four elements. Dancing to “April” by the Lumineers and “Can’t Pretend” by Tom Odell the Americans collected a level four for the lifts, twizzles, combination spin and diagonal step sequence. Their component score was a bit lower and they remained in third place at 160.23 points.

The ISU Junior Grand Prix of Figure Skating Series continues next week in Ljubljana (SLO). The ISU has an anti-Covid protocol in place to keep all participants of the events as safe as possible.