The Netherlands kicked off the World Cup 2020/2021 series with a gold medal in the men's Team Pursuit in Heerenveen on Friday. Veteran captain Sven Kramer led youngsters Chris Huizinga and Beau Snellink past Olympic champions Norway by more than a second, with Canada only 0.08 seconds behind in third. In the semi-finals of the Mass Start, Austrian prodigy Gabriel Odor qualified for the Saturday final.

After Poland got DNF behind their names because Artur Janicki fell in the final lap of the second Team Pursuit pairing versus Belarus, Norway faced New Zealand in the third pairing. The Antipodeans also got a DNF because Kierryn Hughes crashed out of the race, but the Norwegians were unruffled. The experienced Sverre Lunde Pedersen, who anchored his country to Team Pursuit gold at the 2018 Olympics, guided youngsters Peder Kongshaug and Allan Dahl Johansson to a time of 3 minutes and 41.62 seconds.

Getting ready for the next pairing versus Italy, Sven Kramer took a look at the scoreboard. “The Norwegians were pretty fast today,” he said. “We have also won World Cups in 3:42 or 3:43.” With Kramer himself putting in a couple of strong laps drafting up front, the Dutch finished in 3:40.33 to pip Norway to second.

“A very good result in the first World Cup,” Kramer said. “It was the first time we skated in this line-up.” Dutch national coach Jan Coopmans has a wealth of good skaters to choose from for his line-up and he has put together a team of five to pick three for every race. Marcel Bosker and Patrick Roest did not skate this time. “The more depth we’ve got the higher we can peak,” Kramer said. “Marcel and Patrick got rest because they skated a tough European Championships last week. We prepared well with the whole team and two weeks ago we already skated a training race in today’s line-up.”

Canada had a far from ideal preparation for the current, shortened World Cup season. Covid-19 restrictions and a malfunctioning Calgary Olympic Oval forced the team to train on natural ice in Red Deer. Despite the difficulties running up to the Heerenveen Hub, the team came out well. Without world 10,000m champion Graeme Fish, who decided not to travel to the Netherlands, Ted-Jan Bloemen, Jordan Belchos and 20-year-old newbie Connor Howe finished in 3:41.71 in the final pairing to take bronze.

“A good race,” Olympic 10,000m champion Bloemen said. “We worked together very well, carried each other to the podium really. This was Connor’s first ever Team Pursuit and to skate like he did…for a 1500m specialist to bring the lap-times down halfway and hanging in there towards the end. That’s something we can build upon for the future.”

Before his first international race of the season, Bloemen had wondered what form he was in, but he was content afterwards. “It’s good to be on the podium after only a week-and-a-half on this ice, but we still have to wait and see what this means in individual distances,” he said.

“Our preparations have not been ideal. We’ve trained outdoors a lot, and indoor was mostly short track. It’s nice, but you don’t really get that speed-skating feeling. I really love the technique, gliding and using the least possible energy to go fast. That’s not possible on natural ice. This ice, it feels like coming home.” 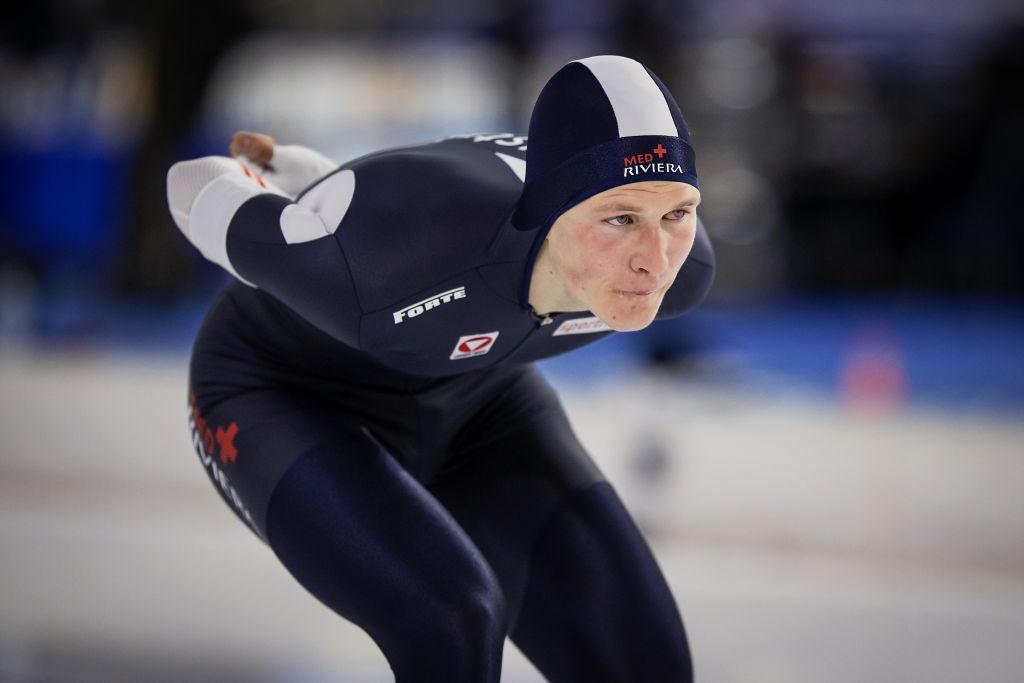 The 20-year-old first-year senior, who won the junior Mass Start world title in 2019 and took silver at the junior World Championships last year, was happy but not surprised. “Last year I already came tenth when I skated my first Mass Start in the senior World Cup, so this is my second time,” he said.

“It’s different and the gap between the juniors and the seniors is pretty big. In the juniors the Mass Start only comprises of 10 laps and at senior level it’s 16. And there’s these very strong guys like Jorrit Bergsma (NED) and Bart Swings (BEL). They make the pace and sometimes it’s really hard to follow them.”

Odor did not let his admiration interfere with his ambitions, however, and took on the challenge, battling Bergsma in the second intermediate sprint. “It was really close,” he said. “I thought he was a little more ahead and I stopped already, but then I saw that it was still really close.”

Odor missed the three points at this sprint, but managed to collect points at the next intermediate sprint to qualify for the final anyway. He is ambitious, but does not expect to win yet: “There’s always a chance for a good result in the Mass Start, but I don’t put any pressure on myself.”

Viewers will be able to watch the ISU Speed Skating competitions that will take place within the hub either via their national broadcaster / channel and for countries where there are no broadcasters, the ISU will offer a live stream on the Skating ISU YouTube Channel.

All the information is available in the Where to Watch which will be updated after each competition. The individual announcements and entry lists will be published under the respective events as soon as they are available. For further information regarding the ISU Speed Skating Hub please visit: https://www.isu.org/heerenveen2021.

In Focus: The best pictures of the ISU European Speed Skating Championships 2021

De Jong and Roest in pole position for Allround titles