Miho Takagi (JPN) left the Utah Olympic Oval Saturday with mixed feelings. The Japanese all-arounder won the 1000m in 1 minute and 11.83 seconds, only 0.22s short of Brittany Bowe’s (USA) world record. Later in the afternoon Takagi seemed to be on track for another gold in the Women's Team Pursuit, but her sister, Nana Takagi, crashed in the final lap and Canada ran away with its second Team Pursuit win of the season. Andzelika Wójcik (POL) kicked off Saturday’s competition with a career first World Cup win and a national record in the Women's 500m. 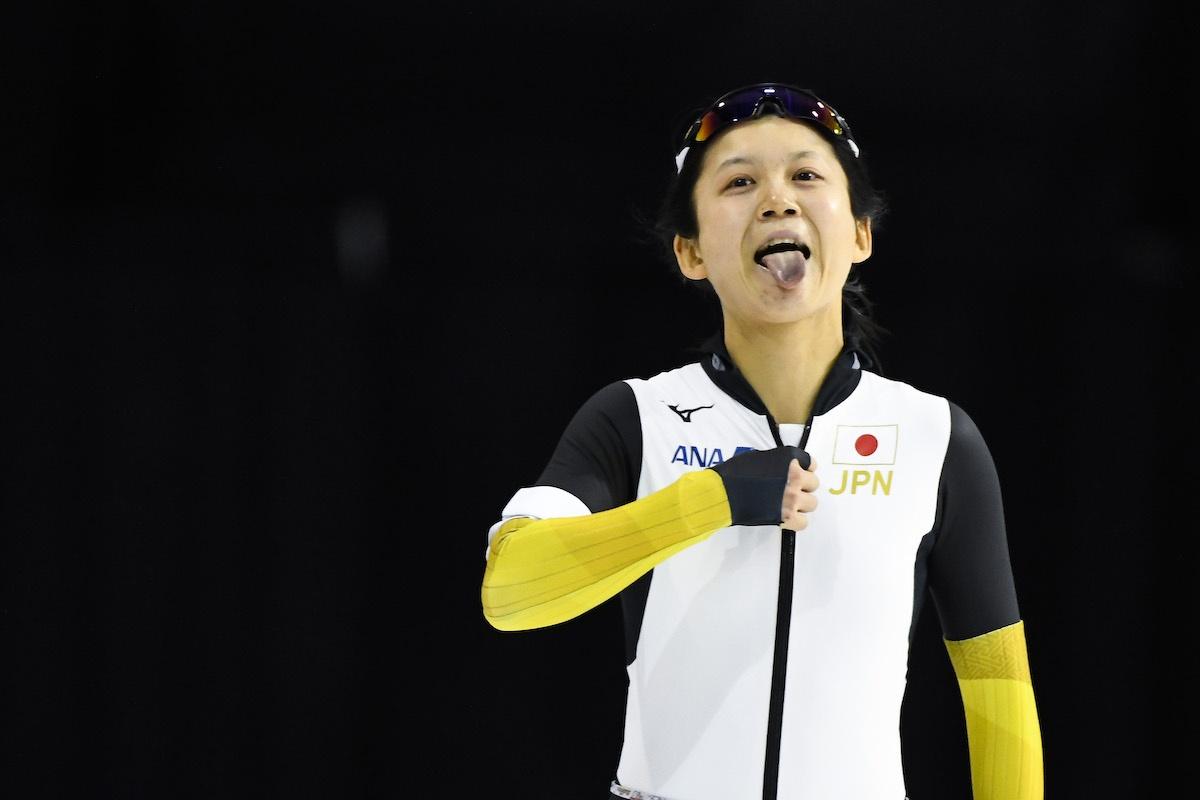 Being one of the most versatile all-around skaters in the current Women's field, Takagi made her mark in the final lap, showing just a bit more stamina than the more sprint-oriented rest of the field.

With a lap time of 27.74, Takagi was the only one to skate the final lap under 28 seconds.

“I’ve skated for over 10 years,” she said of her versatility. “I’ve always done many different races, so now my body knows what to do.”

Coming only 0.22 short of the world record had surprised her.

“I didn't really set any goals or anything, but when I finished and looked at the time and realized, ‘Oh my god, this is so close.’ I had mixed feelings, happy but disappointed at the same time.”

Leerdam said she wasn’t scared off by the bar getting set so high.

In an exciting race versus Bowe, the Dutch European sprint champion made amends for a black-out in the 500m, when she stopped skating because she thought she had made a false start. The starter did not shoot for a second time, however. The race was on, but Leerdam had already lost all speed.

“I was a little mad at myself. And I thought, what just happened? It was very blurry. I just tried to forget it because, of course, you feel like stupid and dumb, but you can’t change anything after, so I focused on the 1000m, and just went for it,” Leerdam said.

Leerdam beat Bowe, finishing in 1:12.25. She was happy with her performance after all.

“Even now, after the race, I still think I can do a 1.11. Even today, I could have done it, but there's room for improvement. So that's always good.”

“(It’s) obviously not what I had wished for, but (it was) a solid race. I just didn't get the speed going on that first lap and Miho (Takagi) had a great, great race, a great first lap and Jutta (Leerdam) also had a great race,” Bowe said, “So I'll have to take the third for now, but (I’m) always going for the gold.”

Bowe retained the lead in the World Cup ranking, however.

“I couldn't be more pleased with how the season has gone so far. Winning two out of the three 1000s, I can't ask for much more than that. I just have to continue to stay focused, continue to work and hopefully gold in Beijing.” 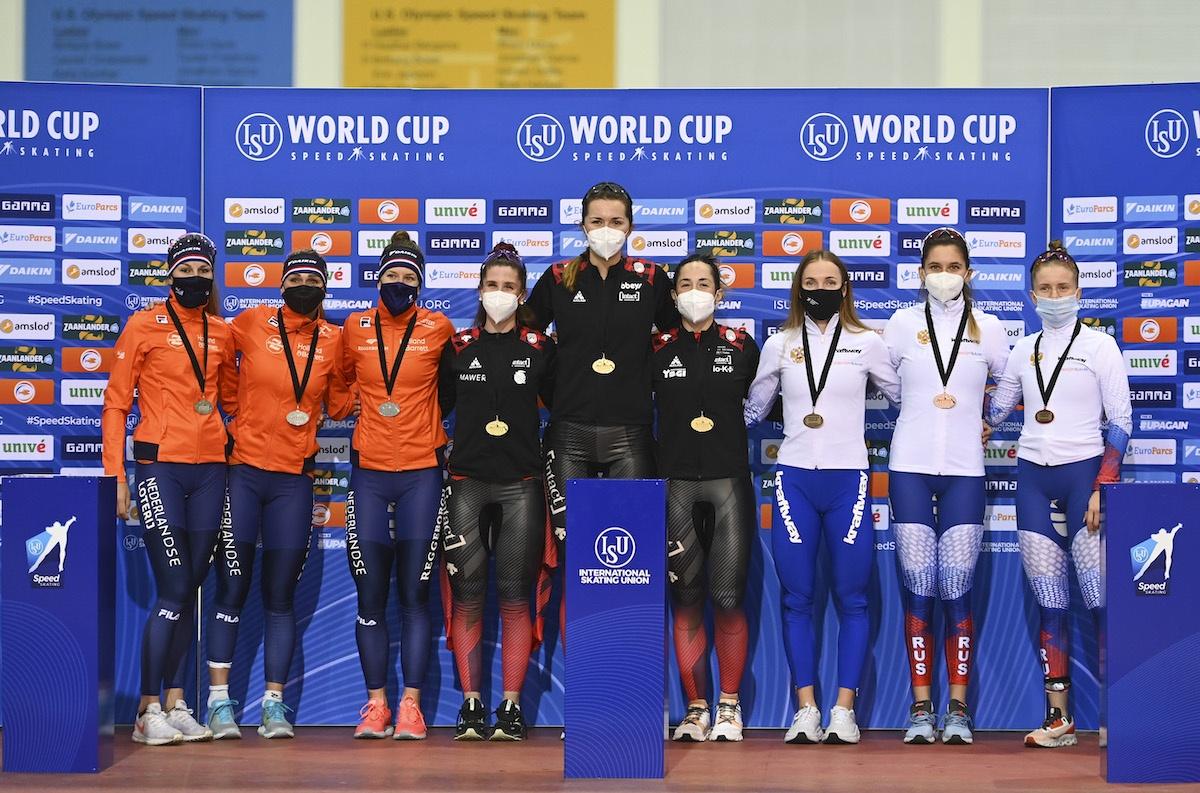 After having come second behind Canada in the season’s first World Cup in Poland, Japan’s Ayano Sato, Miho Tajagi and Nana Takagi were on track for gold in Salt Lake City, with a 1.97s advantage over Canada entering the final lap.

They were not able to bring it home, however. Nana Takagi crashed out in the final lap, got up again, but finished last.

“It’s very difficult to break it down,” Miho Takagi said. “The three of us, we’re still discussing what exactly happened.

After having had some varying line-ups over the past seasons, Japan is back in the formation that won the 2018 Olympic title and they aim for a back-to-back title in Beijing next year.

“We’re focused on the Olympics. We were really skating to the best of our abilities today, so that’s why we’re really disappointed about the crash,” Takagi said.

Initially the Canadian women (Ivanie Blondin, Valérie Maltais and Isabelle Weidemann) were not aware of Japan’s tough luck, but they gratefully accepted the present, winning their second Team Pursuit gold of the season in 2 minutes and 52.39 seconds.

“I didn't even realize it happened until we came around and then we saw Nana was gathering herself,” Blondin said.

“In the next few weeks, we're going to be watching their race. They're a great competition. I think we can definitely contend with them.”

Saturday’s action started with a big surprise. Andzelika Wójcik (POL) won the second Women's 500m of the World Cup weekend in 36.77, beating her own Polish national record for the second time in two days. On Friday she had come in fourth in 37.03s.

“It’s a real good feeling,” she said of her career first World Cup win. “Until now, I didn't think I could make it (winning a World Cup race), but everything is possible.

“I was working a lot to improve my technique because I think everything is there. The power is there and the ability to make good times.

“I was feeling really good in the beginning of the season. In Inzell (Germany), I made a huge personal best and national record. That was a huge surprise for me, and I thought this could be a really good season.”

Angelina Golikova (RUS) came only 0.01s short of Wójcik and took silver in the second 500m at the Utah Olympic Oval. Olga Fatkulina (RUS) came in third with a time of 36.93s.

Erin Jackson (USA) had won four out of five 500m World Cup races so far this season, including Friday’s race in Salt Lake City, but her second race on home ice didn’t pan out the way she had wanted.

“I had what I think is a bit of a false start, so a little hesitation there but it wasn't pulled back. You have to be ready for everything. It just comes down to being able to refocus after something like that,” Jackson said.

Jackson finished sixth in 37.02s, but retained the lead in the World Cup rankings.