Joey Mantia (USA) saved the best for last at his home World Cup in Salt Lake City. After having won the 1500m on Saturday, the 34-year-old from Ocala, Florida, anchored teammates Emery Lehman and Casey Dawson to gold and a world record in the Team Pursuit to conclude A Division action on the final day of competition. Earlier on Sunday, Thomas Krol (NED) led the third Dutch podium sweep in the 1000m this season, and Wataru Morishige (JPN) seized his career first World Cup gold in the 500m. 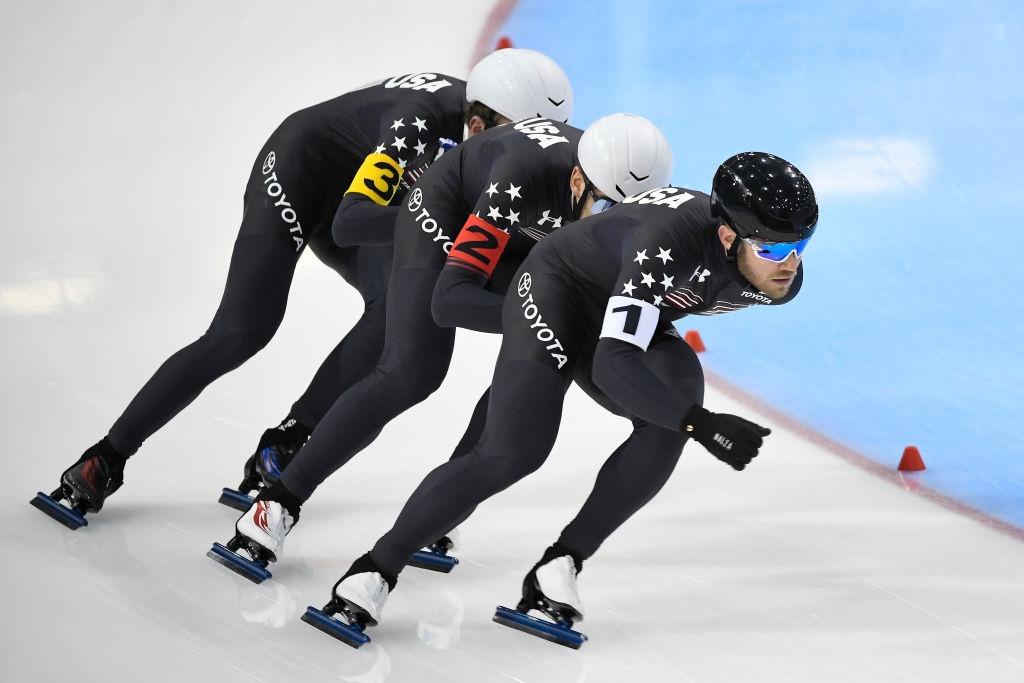 Team USA skated in the first pairing of the Team Pursuit competition, and executed their tactics to perfection.

Finishing in 3 minutes and 34.47 seconds, the Americans shaved 0.21s off a previous record the Netherlands had set at the 2020 World Championships in Salt Lake City.

Mantia led the way throughout the race with Lehman and Dawson pushing from behind.

“He's really the leader,” third man Casey Dawson (USA) explained. “We're the engines in the back pushing them. So that's how we think about it. We're just like a train going around the track.”

Team USA has trained their tactics for some time, Mantia said.

“We got together a couple years ago and decided that this would be the best way.

“These guys practice together and I don’t practice with them on a regular basis. They just do a great job practicing the pushing, and obviously it shows out there.

“I did the easy job. I just get up front and lead the way and these guys are pushing me so hard that I can basically just move my feet and I keep the rhythm and keep the speeds up,” Mantia said. “The magic behind our Team Pursuit being successful is that everybody thinks everybody else's job is the hardest.”

“I'd just put it exactly like him (Mantia). I'm always in second position, and I always feel like, ‘I'm getting tired, well, how tiring would it be to lead the whole thing?’,” Lehman said. “So, like Joey said, I'm sure Casey (Dawson) feels the same, and when Ethan (Sunday’s substitute Ethan Cepuran) skates, that he feels the same.”

None of the teams that got on the ice after the Americans managed to come close to their time.

The Netherlands (Jan Blokhuijsen, Marwin Talsma and Marcel Bosker), who finished sixth in 3:39.79, retained the lead in the World Cup ranking, with Norway in second and the USA in third. 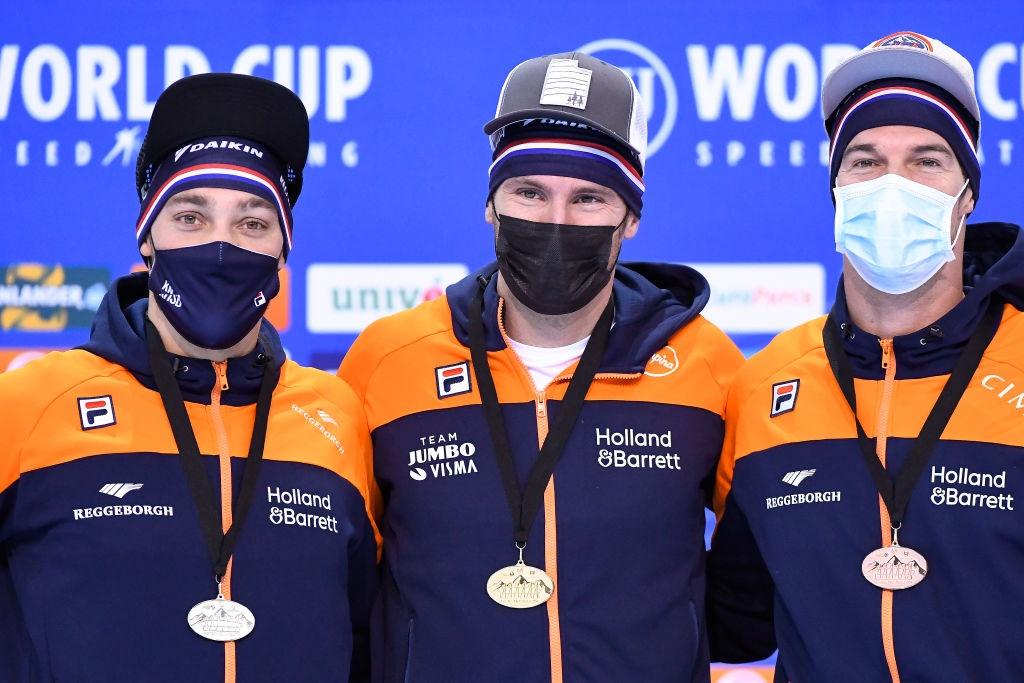 The European Sprint Champion was happy with the gold and the time he pulled off.

“It’s just 0.19s slower than my personal best, so well done,” Krol said. “I flew in late for this World Cup, so I did not have high expectations. I had a little trouble with the high speed, but it was a good race after all.”

Nuis said he always enjoys skating versus Thomas Krol, a matchup that has led to many great races over the past four years.

“It's really nice, but I gave this one away totally,” he said. “Yesterday, I started to slow, a bit to chill, too much on the outside of the blade. I wanted to be aggressive today, but I was a bit too much on the front of my skates and then Thomas came across really, really fast.

“My second lap was solid. Thomas had a wonderful second lap, but it was because he was behind me (getting a draft on the final back stretch).”

Krol insisted that he would have won regardless.

“I can skate very well without Kjeld too. Of course it’s nice to get a fine draft on the backstretch, but I had more speed coming out of that corner already. I was going to win anyway.”

Otterspeer took the bronze medal in 1:06.95. Like Nuis, he said he had been too aggressive.

“I know I'm in good shape, but you have to be pretty calm on this ice. I was too wild, too many misses.

“I'm actually surprised that I am on the podium, because the speed is there, but if you're making mistakes on this ice, you're losing pace real quick.

The fourth Dutch 1000m ace, Kai Verbij (NED) came in fifth on Sunday. In December, the quartet will make out which three skaters qualify for the Beijing 2022 Olympic Games at the Dutch trials.

“We four, we are the strongest this season,” Otterspeer said. “It will be a tough qualification with Christmas for us for Olympics, but we're doing great. I'm really happy with the level.” 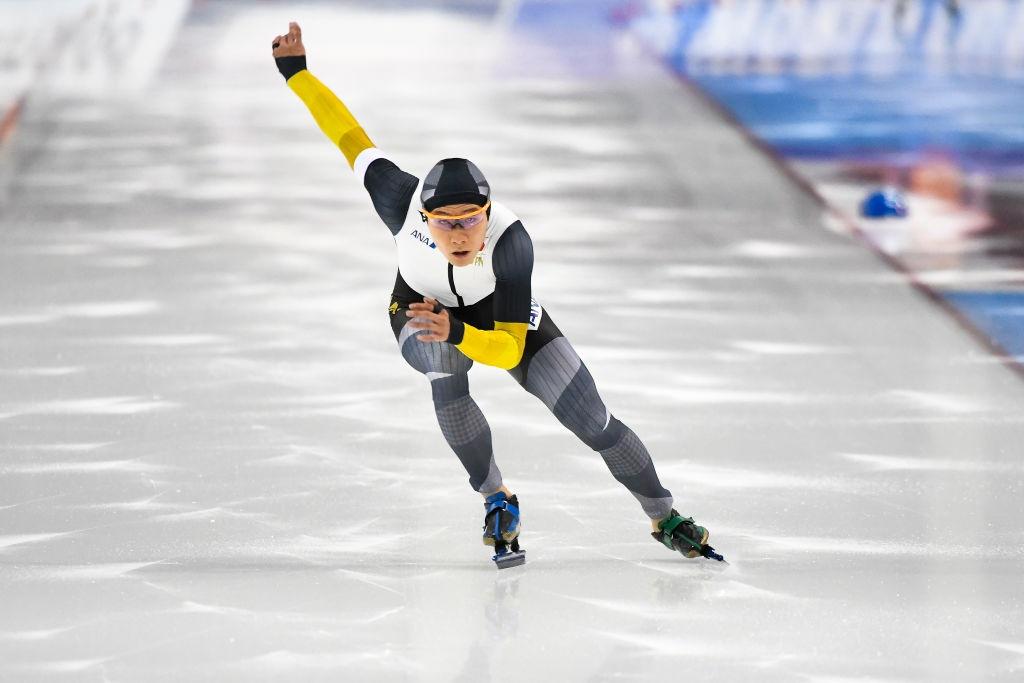 Before the fireworks in the Team Pursuit and the 1500m, Wataru Morishige (JPN) celebrated his maiden World Cup win in an eventful 500m race.

Morishige clocked 33.99 seconds and was the second man to beat the 34 barrier this World Cup weekend, after Tingyu Gao (CHN) had set 33.96 in Friday’s B Division.

Promoted to the A Division, the Chinese sprinter got disqualified on Sunday due to two false starts, however.

Morishige surprised himself with a sub-34-second race.

“Of course I’ve been aiming for that, but for it to happen already… I’m very happy I managed to do it today.”

The 21-year-old sprinter thanked the staff of the Japanese national team for his quick development as a top skater.

“Since I joined the national team, everyone helped me, with funding and everything else around the sport, so I could focus only on skating.”

After Morishige set his time, Viktor Mushtakov (RUS) seemed on track for another sub-34-second race, but the Russian crashed and hindered pair mate Tatsuya Shinhama (JPN) coming down. The Japanese World Sprint Champion got a re-skate, but crashed himself during his second go.

The Canadian World Cup leader is looking forward to home ice in Calgary next week. “I'm excited to get more chances to skate a 33 too,” he said.