Hwang Dae-heon of Korea triumphed in the Men’s 1500m to take his first Olympic gold medal. Canada’s Steven Dubois clinched the silver, while Semen Elistratov (ROC) earned the bronze. Earlier today the favorites in the Women’s Heats and the Women’s 3000m Relays advanced.

Korea’s Hwang Dae-heon skated to his first Olympic gold medal in style. In a historic Final with ten competitors, the 2018 Olympic silver medalist in the 500m had a slow start but then made his move and took the lead from lap six on and never relinquished it to cross the finish line first.

Hwang started confidently in the quarterfinal and looked strong in the semifinal as well. The 22-year-old made up for his disappointment in the 500m when he missed the Final because of a penalty.

“It is the most intense race ever. I am really proud of myself in accomplishing gold in such a race. When I reached the finish line, I remembered in that moment I was so happy my mind went blank,” Hwang said. “All the moments while I was training including (the moment) when I was knocked out in the 1000m races came back. I was frustrated, but I wanted to show everything that I can do. I reminded myself if I do what I prepared for I could show good results. That’s how I entered the race.”

Hwang Dae-heon (KOR), Steven Dubois (CAN) and Semen Elistratov (ROC) compete in the final A of the Men's 1500m Short Track Speed Skating event during the 2022 Winter Olympic Games in Beijing, China.© AFP

Dubois (CAN), who competed in the second semifinal, was advanced to the Final as were three more Skaters from the third semifinal. Together with Hwang and Elistratov, the Canadian managed to stay ahead of the rest of the pack from lap six on. It was Dubois’ first Olympic medal while Elistratov (ROC) claimed his second individual Olympic bronze medal over this distance.

“Racing with like 10 people is always hard. You always have to be to the front, if you’re back the race is over for you,” Dubois shared. “I had a lot of doubts coming into the Final. There are a lot of great Skaters, Hwang, Elistratov, the Liu brothers. I was a little shaky coming into the Final. Having so many Skaters brought out the best in me.”

Elistratov (ROC), a four-time Olympian, agreed: “There were ten guys, the final was very tough. They are the top Skaters, the best in the world. I knew that I had to get into a leading position from the beginning otherwise it would be hard to move up from a position behind. So I made my move forward,” he explained. “I tried to overtake him (Dubois), but I realized that it could result in a fall and I did not want to take the medal away from the Canadian nor from myself. I think I was ready for a second place today, I was just lacking a little bit, but I am still very happy with this medal.”

Canada’s great Charles Hamelin, the 2014 Olympic Champion over this distance, lost his chance for a medal when he was penalized in the semis for a late lane change. Two-time Beijing gold medalist Ziwei Ren (CHN) and World record holder Sjinkie Knegt (NED) received penalties as well. 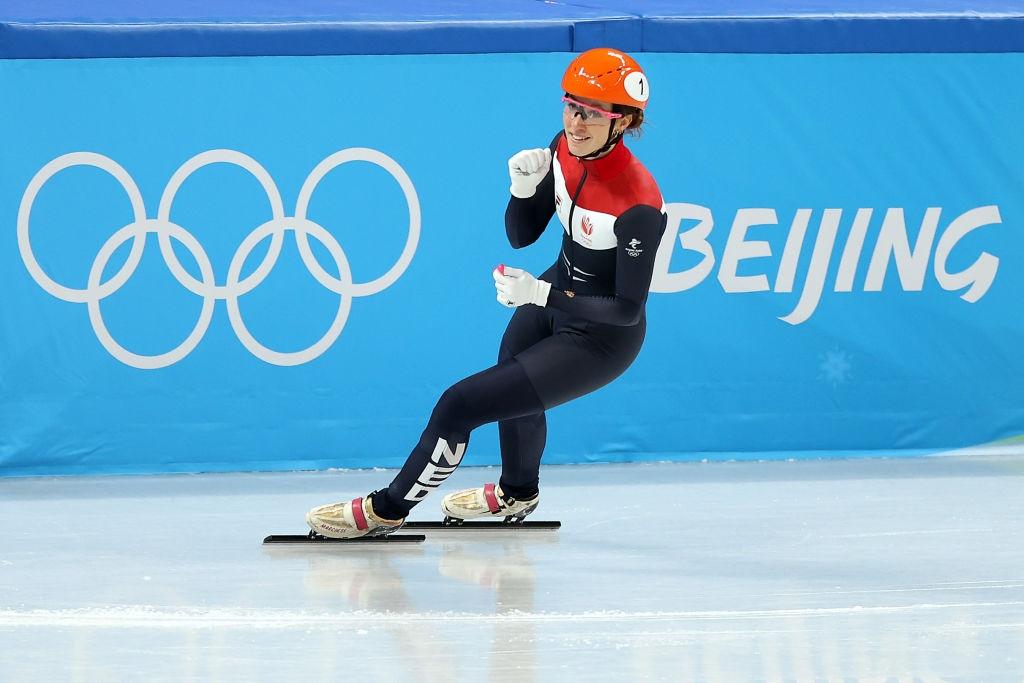 Choi set an Olympic record in the first Heat that was bettered by Schulting in the second Heat. Four-time Olympic medalist Kim Boutin (CAN) fell and did not make it through.

In the first semifinal for the Women’s 3000m Relay, the Netherlands and China qualified easily for the A-Final. It was a close fight in the second semifinal with Canada and Korea making it through to the A-Final. ROC, USA, Italy and Poland will compete in the B-Final.

Charles Hamelin (CAN) aims for a second 1500m Olympic gold