Team Paradise (RUS) is the most successful Synchronized Skating team in the past five years. Since the skaters from St. Petersburg claimed their first ISU World Synchronized Skating Championships medal in 2015, they never left the podium, collecting three ISU World titles and two bronze medals. However, even this successful team and its skaters had tough times to overcome and had to get #UpAgain.

“It is very important to help each other, to never forget that you are a team, that you are all together and you are all together go for one goal,” team captain Anna Shkurdai said. “The fact that you are not alone, but you have a lot of energy that you can put into your dream helps a lot in a difficult time. Listen to each other, listen to the coaches and even if you are not yet at the very top, you can set small goals and go towards them in order to achieve a big goal as it happened in our example,” she added.

Russia is a huge Figure Skating nation. In the past years, especially the Ladies have dominated the scene since 2014 when Adelina Sotnikova struck gold at the Olympic Winter Games in Sochi. Their success pushed the popularity of the sport in the country to new heights. Russia can look back at a rich tradition in Pairs, Men’s Skating and Ice Dance as well. However, Synchronized Skating always remained in the shadow of the other disciplines.

When Team Paradise started out, nobody took them really seriously. They had trouble getting enough ice time and support. “Synchronized Skating is a discipline that does not exist yet as long as Single or Pair skating. And it was not accepted right away,” Shkurdai noted. “There was not enough ice, not enough (training) time. It was hard to find that, to find support – financial, material support in order to develop. Desire alone cannot help,” she continued and added: “You can say that it wasn’t quite a professional sport at the beginning. It started to develop and acceptance grew step by step. It was a difficulty in itself to get spectators interested and to make this discipline a difficult sport.” Her teammate Viktoria Proshina agreed: “It was hard to convince people to take it serious.”

The skaters had to put in a lot of hard work to reach the top. “Always remain a team and just work, work, work. Hard work in any case will bear fruit,” Proshina said about their recipe for success.

Anna and Viktoria themselves had to be convinced at the beginning that Synchronized Skating is a serious sport. They joined the team five years ago, so just when the team won their first ISU World Synchronized Skating Championships medal. Before that, they were 14-year-old single skaters about to quit.

Shkurdai wanted to retire from skating, but a choreographer suggested her to go into Synchronized Skating. “I, too, was skeptical about this sport, as so many in our country, actually,” she admitted. “It was very hard to accept a new discipline. Because it is a completely different feeling to stand with another person in hold. It is not that easy.” Her parents wanted her to continue in Singles, but a serious back injury made it impossible. It didn’t take Anna long to take the decision. “I enjoyed talking to the girls, the atmosphere at the competitions was so friendly, energetic to the maximum, positive. I fell in love with it and now I can’t even imagine how to be without the team. This is my up again story – that coming off injury I found a new sport for myself and now this is just the love of my life.”

Proshina had knee injuries that brought her singles’ career to an end and was invited to try Synchronized Skating. “I looked for other sports, where to go to. And this is your sport, your favorite thing, just in a somewhat different variation. Therefore, as soon as I went for the first try out, I was hooked. Obviously, it makes you crazily happy how your career as an athlete continues,” Viktoria said.

The two former single skaters embraced the team spirit quickly. “The first thing that draws you in is that it is something new. It is interesting. A new sport, a big female collective, this means new friends and this is great,” Anna shared. “The single skaters are also all friends, but nevertheless, they are rivals in competition. And here it is – one for all and all for one. This phrase is old, but it is really working. Especially in our team.”

Shkurdai and Proshina joined the team in the season when Paradise won their first ISU World Synchronized Skating title 2016 in Budapest (HUN). The Russians defended their title the next year in Colorado Springs (USA). They were the top favorites heading into the 2018 ISU World Synchronized Skating Championships in Stockholm (SWE) and led following the Short Program. “In sport falls and bad things happen, very unexpected ones. And that happened to us at our third World Championship,” Anna recalled. “One skater fell from a lift. Fell. It was terribly upsetting. As always, we had put in a lot of work before we went to the World Championship. It is this point in the season when you are preparing to the maximum and you want to show your maximum. And we, in first place after the short program, go out, skate with confidence. And at the very end of the program we have a lift, the next to last element. And simply, as I remember – that lift is in front of me and it is like my world is coming down. It was very hard emotionally.”

Team Paradise slipped to third place. “It is tough after two victories, obviously, but we did not give up,” Shkurdai said. “We understood that we have to prove again that we are the best that we can do it, that we are one of the best, the strongest teams in the world.” 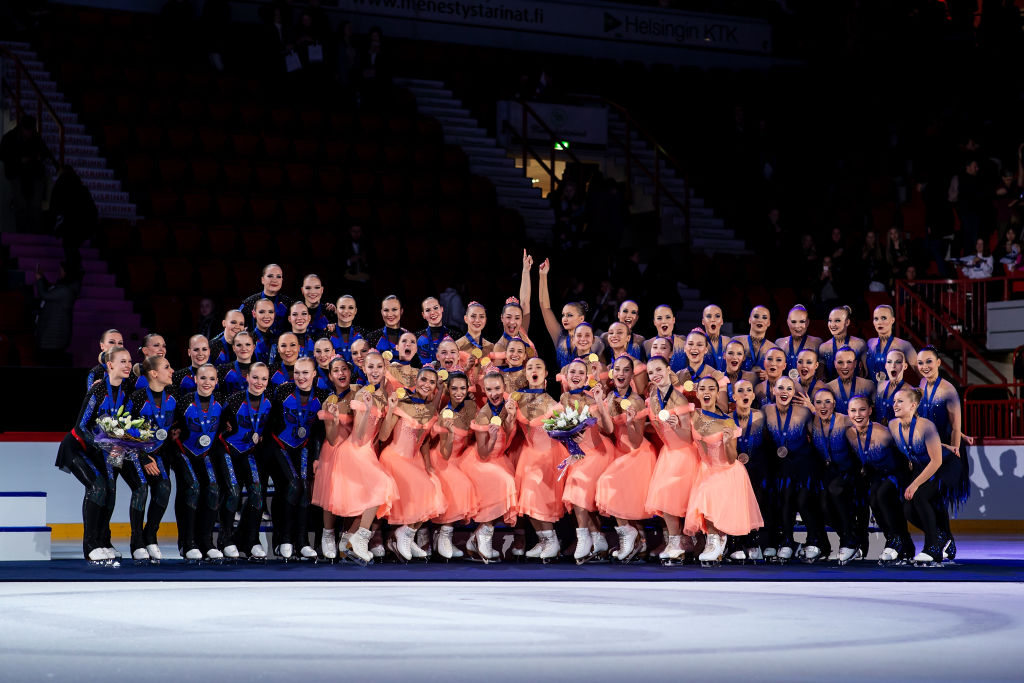 The Russians indeed came back strong and rose to the top of the World podium in 2019 again – on the home ice of their tough rivals from Finland, Marigold Ice Unity, in Helsinki. The Finns, multiple ISU World Champions, settled for the silver. “This mistake (in 2018) made us for sure stronger, it was a lesson, a good lesson. For the whole team,” the captain pointed out.

Shkurdai and Proshina are looking forward to seeing their sport growing. “We would be very happy if it continues to grow and develops further,” Anna noted. “It is the #UpAgain story of the sport that it is now developing very well and we’re doing everything we can at the World level to promote it. These are new elements, all kind of new lifts. Each year there are new rules, so we are perfecting ourselves, make it harder so that it will be accepted in the world and we start getting closer to the Olympic Games. It is, obviously, the dream of each Synchronized Skater. We, the Synchronized Skaters, our families, friends and in general everyone are dreaming so much about that one day it will come true (becoming an Olympic sport).”

Skating Community rises to the challenge for the biggest 24-hour digital Olympic workout.