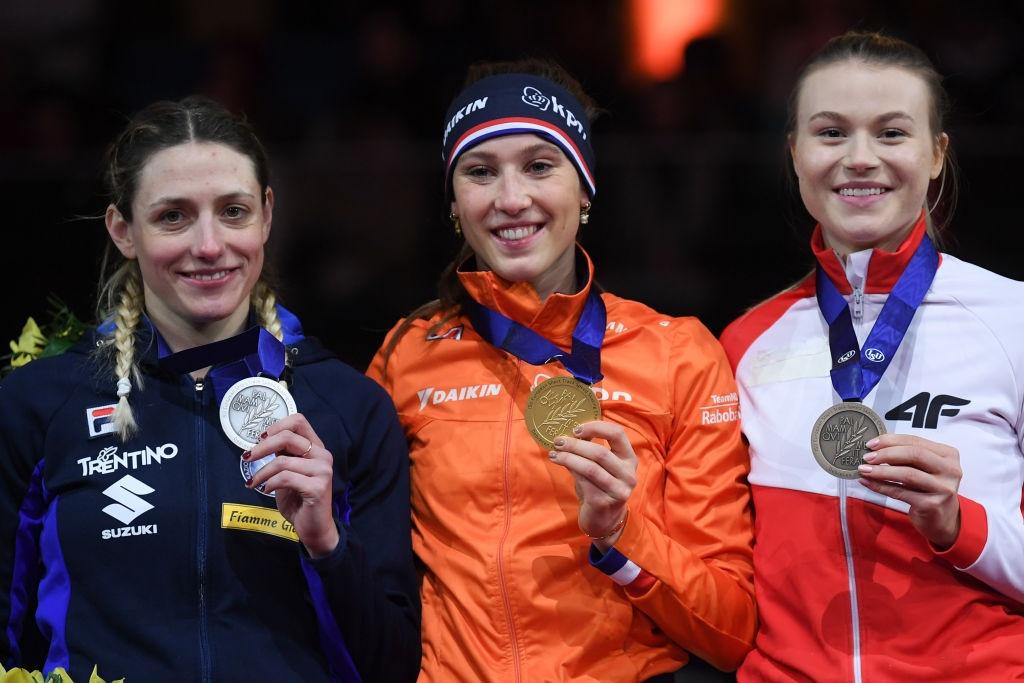 Suzanne Schulting (NED) dominated the first day of finals at the 2020 European Short Track Championships in Debrecen, Hungary, defending her European 1500m title and leading the 500m final from start to finish, while Hungary's own Liu brothers won a gold each in the two men's events.

Dutch world No.1 Schulting has topped the podium at Olympic Games, World Championships and World Cups, and came to Hungary as the reigning European overall champion, but won a milestone career-first international 500m gold medal as she beat Italy’s Martina Valcepina and Natalia Maliszewska (POL) in the final.

"Normally it’s the 1000m and 1500m that I win and I usually just skate the 500m in tournaments like the Europeans and the Worlds, or in the World Cups just to keep it up, so I’m really happy with this.

"I was skating against the top of the world. Natalia, Lara (compatriot Van Ruijven, who finished fourth) and Martina are so, so good and always skating a finals in this distance, so I’m just really happy with that.

"It was the highlight of the day."

Maliszewska showed no sadness over having to settle for bronze in losing the title she won last year to the dominant Dutch skater.

"I’m almost crying so I’m very happy with this," she said.

"I’m coming home with a European bronze medal so it matters a lot.

"Suzanne shows a huge shape today and she was really fast.

"I’m so happy for her because it’s a new distance for her." 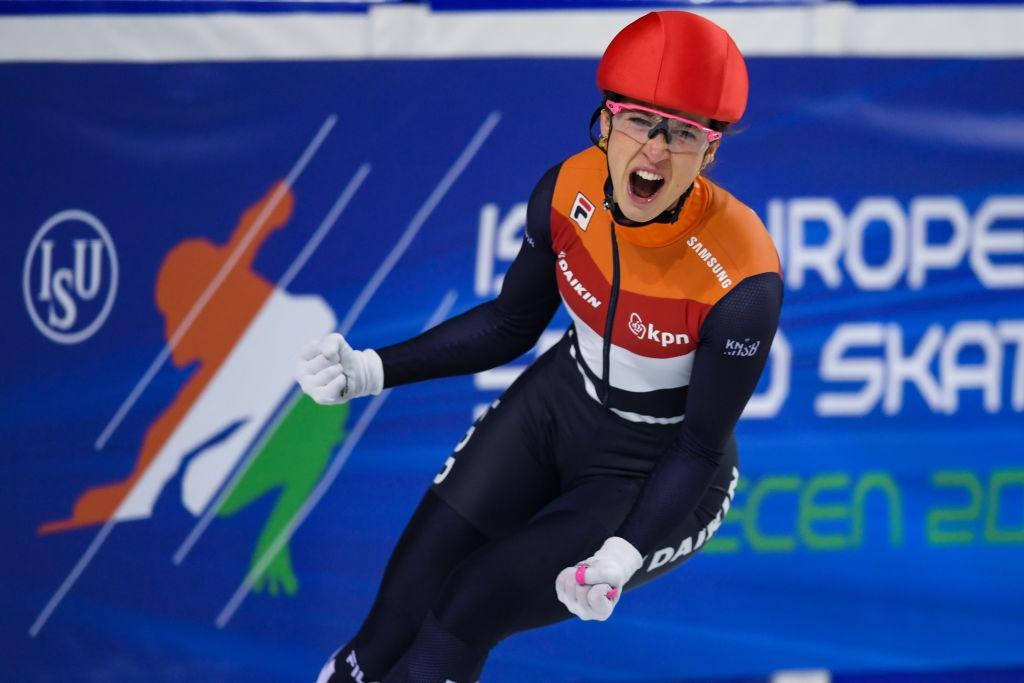 Two hours before winning the 500m, Schulting had controlled the 1500m final, going from fourth to first position lap 10 of 14 to finish more than a fifth of a second clear of silver medallist Arianna Fontana (ITA) and bronze medallist Anna Seidel (GER).

"I didn’t expect that I would get a gap that was that big," Schulting said.

"I saw my lap times after the final and I was quite impressed because it was really fast so I’m also really happy about that and about how I’m skating.

"I feel unstoppable right now but I need to keep that focus for tomorrow because I’ve only got 50% of the points. If I keep my focus I think it’s going to be all right tomorrow." 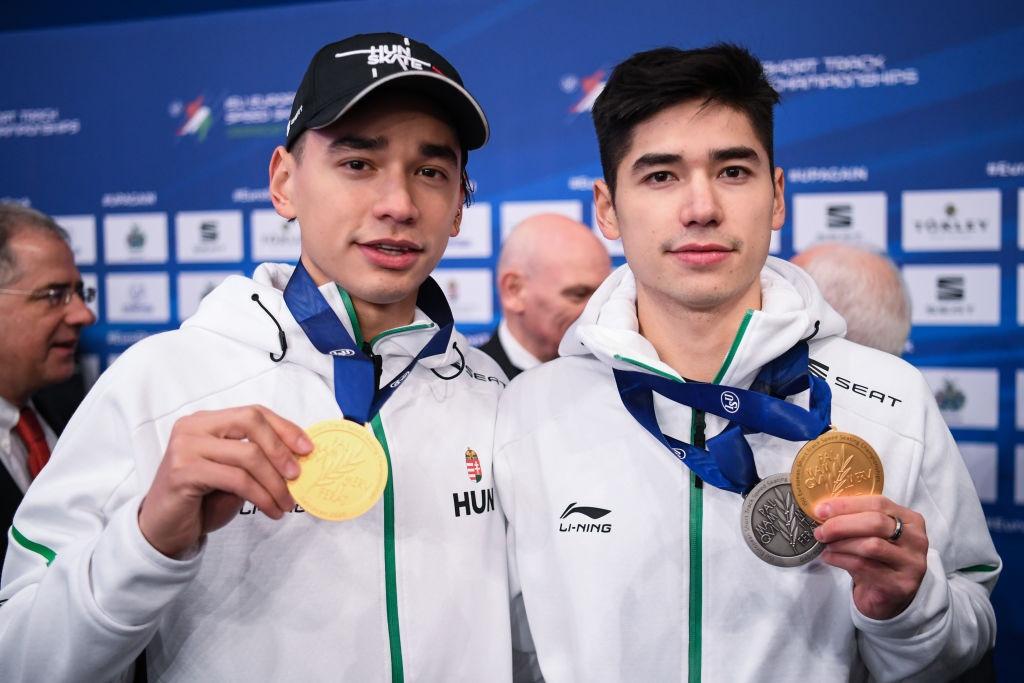 Shaolin Sandor Liu (left) won the gold in the 500m ahead of little brother Shaoang, who had earlier sealed the 1500m title © International Skating Union

In the men’s competition, Hungarian brothers Shaolin Sandor and Shaoang Liu raised the roof at the sold-out Fönix Arena, winning a gold medal each.

It did not start well for Shaolin Sandor, 24, who fell in the last curve of the 1500m final as his little brother Shaoang won the gold medal ahead of Dutchman Itzhak de Laat and Vladislav Bykanov from Israel who got silver and bronze.

But the PyeongChang 2018 Olympic 5000m relay gold medallist bounced back to win the 500m final, Shaoang taking the silver ahead of Semen Elistratov (RUS).

"I felt that physically I am feeling good but I just needed to get it together in my head," said Shaolin Sandor, who sat down alone after the first final to find his focus.

At last year’s European Championships in Dordrecht, Netherlands, Shaoang had won the 500m and Shaolin Sandor the 1500m. Swapping the titles and adding a silver medal in front of the home crowd, the Liu brothers proved that they can handle the pressure of being the tournament’s poster boys.

"We were probably on pictures on every door here, me and my brother," Shaolin Sandor said.

"It’s a little bit of a pressure but it’s a healthy pressure and I think we’ve learned how to handle it and it boosted us.

"It’s super nice to skate with my brother. I feel whole with him. He makes me special and he makes it easier for me to skate. Hopefully in the future I’ll skate more and more with him. All our family is here and especially my parents must be super happy to see us skating here."

Shaoang, 21, said it can be difficult to compete in a quick-paced final with a member of your own family next to you.

"What would happen if we push each or trip each other? But we are willing to take the risk because if the competition is going well we can stand together on the podium." 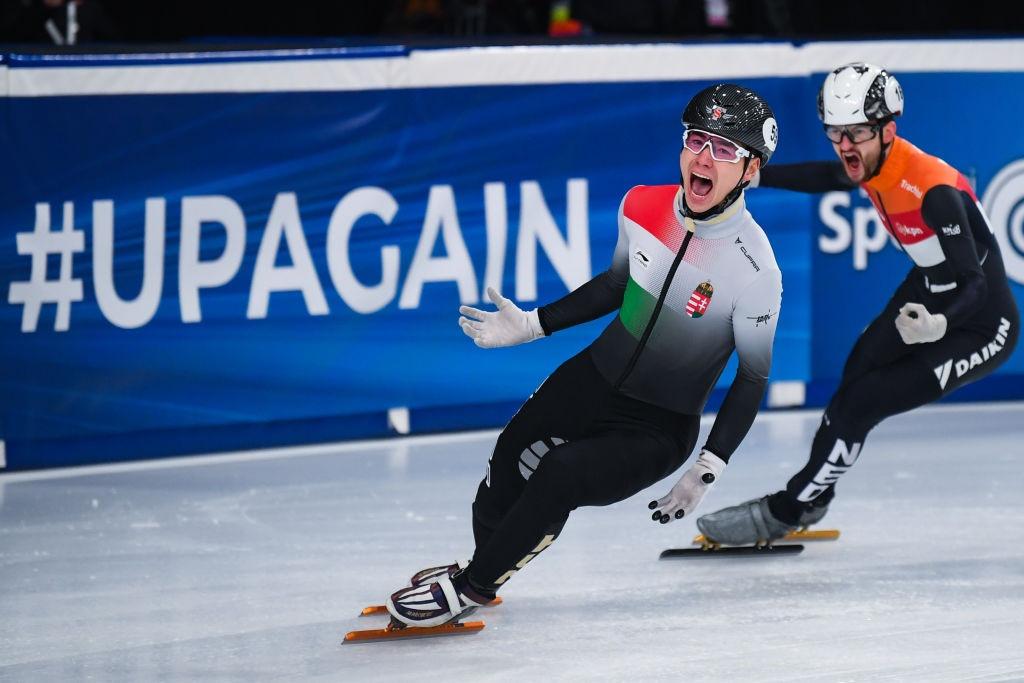 The younger Liu brother ended a memorable day by wearing the red helmet as the tournament’s overall leader, having bagged his second individual gold medal at a major international event after his 500m triumph at last year’s European championship. He had nothing but praise for the fans at the Fönix Arena.

"It’s an unbelievable feeling when the stadium is full. I think I’ve never seen this many fans supporting us at a Short Track event in Hungary before," he said.

In another first of the evening, Itzhak de Laat (NED) celebrated silver behind Liu in the men’s 1500m final as if it were gold: it was the Dutchman’s first ever individual medal.

"Finally I’m on the podium and I feel really happy about it," he said.

"When I crossed the finishing line there was even a bit of disbelief. I thought to myself, ’am I really second? Yes, I am second’. I finally did it, I finally made it.

"I’ve just worked hard and slowly become better and better and today I was finally good enough for a medal. And today I put a pair of really orange boxers on, maybe I should wear them more often – orange is a good colour so I’ll keep those."

In Focus: The best pictures of the ISU Four Continents Short Track Speed Skating - Montréal (CAN)