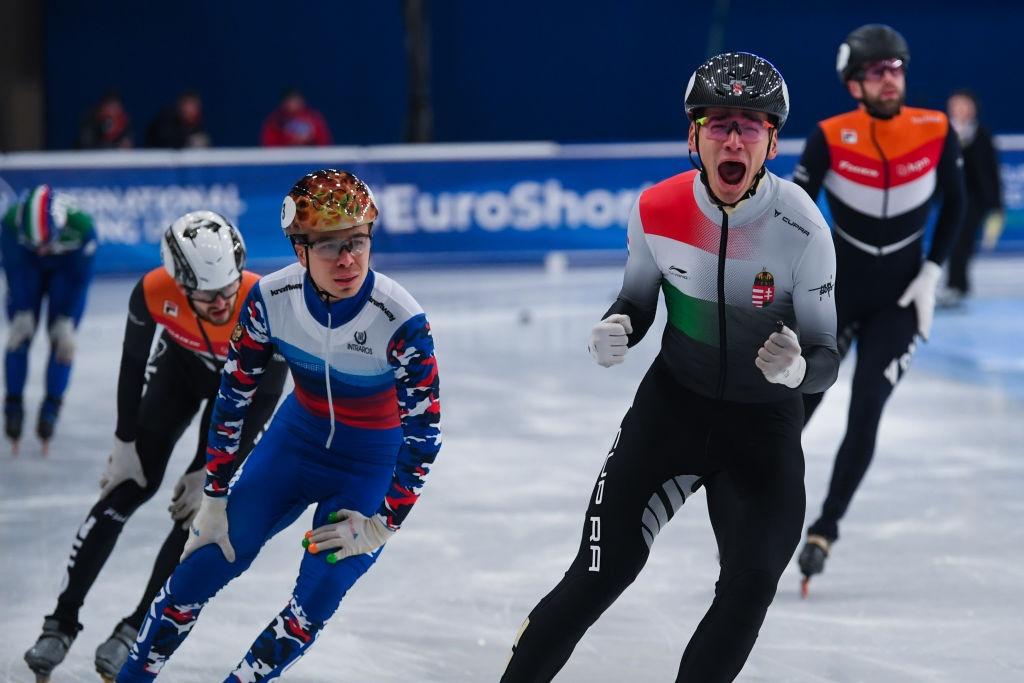 "We can help each other so that I go in the first place and Ado follows me. With this tactics we can easily be in the top.

"In the final we had the same tactics so it was kind of easy for us to dominate the others."

The brothers were seen playing rock paper scissors between the races at Fönix Arena, but Shaolin Sandor insisted that they weren’t using the game as a way of deciding who will cross the finish line first.

"Shaoang is better than me at it, so he usually wins," he said of the schoolyard game.

"We didn’t do a rock paper scissors before the race to decide who is going to win. We just try to go out and race everyone for themselves and watch out for each other but it turned out well so we are happy." 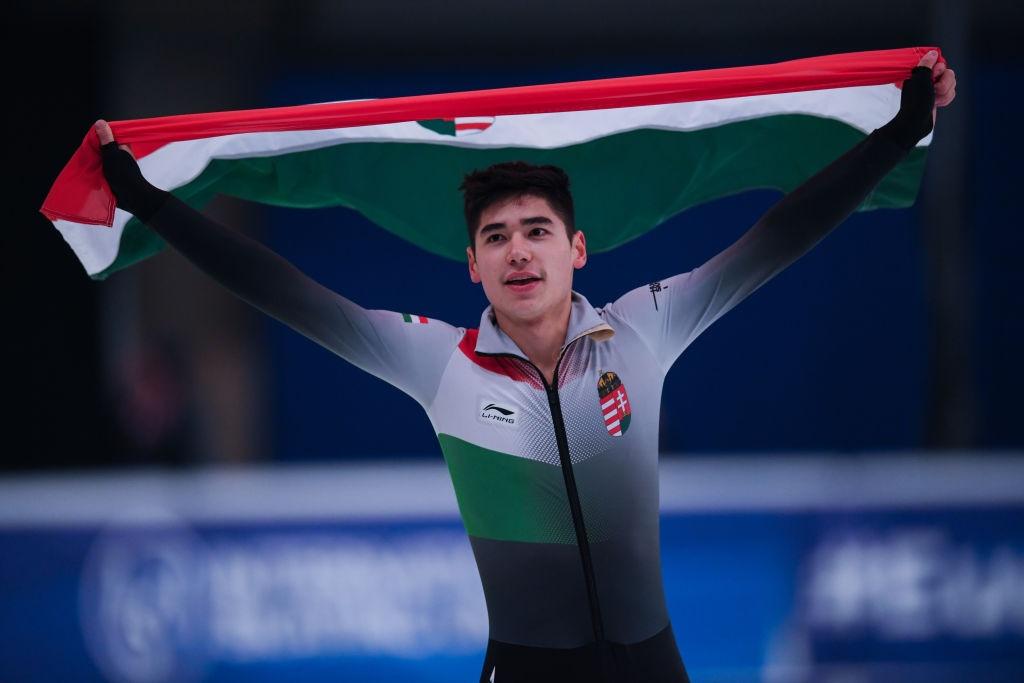 Shaolin Sandor’s gold doubled his tally for the weekend having won the 500m yesterday, but it was brother Shaoang, 21, above, who secured the overall title on 77 points, just two more than his 24-year-old sibling.

"I had a small injury two weeks ago and I’ve had some back pain since that, so didn’t have a chance to train hard and do my best but I’m pretty happy with the results - I’ve never been an overall European champion before."

The overall winner said competing on home ice gave him an extra push – even though he had to block the fans out at times.

"What the Hungarians did was amazing. The most memorable distance was the 1500m because when I crossed the line I felt like the whole arena would explode," he said.

"And today, when I did the warm-up, I was just hearing everyone shouting my name, like ’Look up, I’m here’, but I’m trying to close them out because I have to focus.

The brothers came away with two golds each, Shaoang’s silvers in the 500m and 1000m making the difference in the battle for the overall title after Shaolin Sandor crashed out of the 1500m on Saturday.

It was only the elder Liu who came between Shaoang and gold in the shorter disciplines, but the younger skater has no problem with losing to his brother.

"I can let only him beat me. I wouldn’t let anyone else be in front of me," he said.

Elistratov leaves it late before charging to double-gold 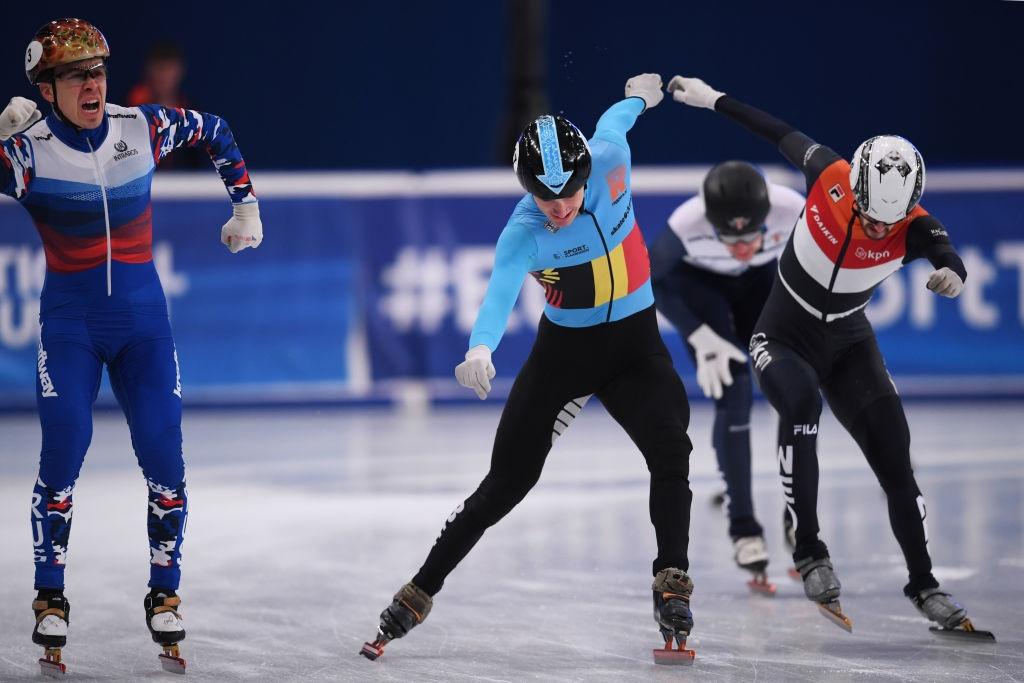 Together with Hungary’s other pair of brothers, Cole and John-Henry Krueger, it looked like the Lius were going to get a perfect ending to the weekend, Shaolin Sandor crossing the finishing line first at the end of an intense Men’s 5000m relay final, to the excitement of the home crowd.

However after a nervous wait while the judge reviewed a late changeover, Hungary received a penalty for obstruction. That gave the Russian team of Daniil Eybog, Denis Ayrapetyan, Pavel Sitnikov and Semen Elistratov the gold medal, with Netherlands winning silver and Italy taking the bronze.

"I’m kind of sad for the relay," Shaoang Liu said.

"I think we had a clear path but it was the judge’s decision and it’s nothing we can change. When he pushed the button that Hungary is getting a penalty, we can’t change it back.

"It would’ve been nice for the whole team to stand on the top of the podium but this is Short Track and anything could happen. I’m still pretty happy with my individual results."

Elistratov, above left, had a big Sunday in Debrecen, winning the 3000m superfinal ahead of Belgian silver medallist Stijn Desmet after a strong push in the last lap saw him move up from a fourth-place position to win on the line.

The Russian finished third in the overall ranking on 65 points, and no doubt felt slightly at home in Debrecen as he has been training with the Hungarian team since last summer. 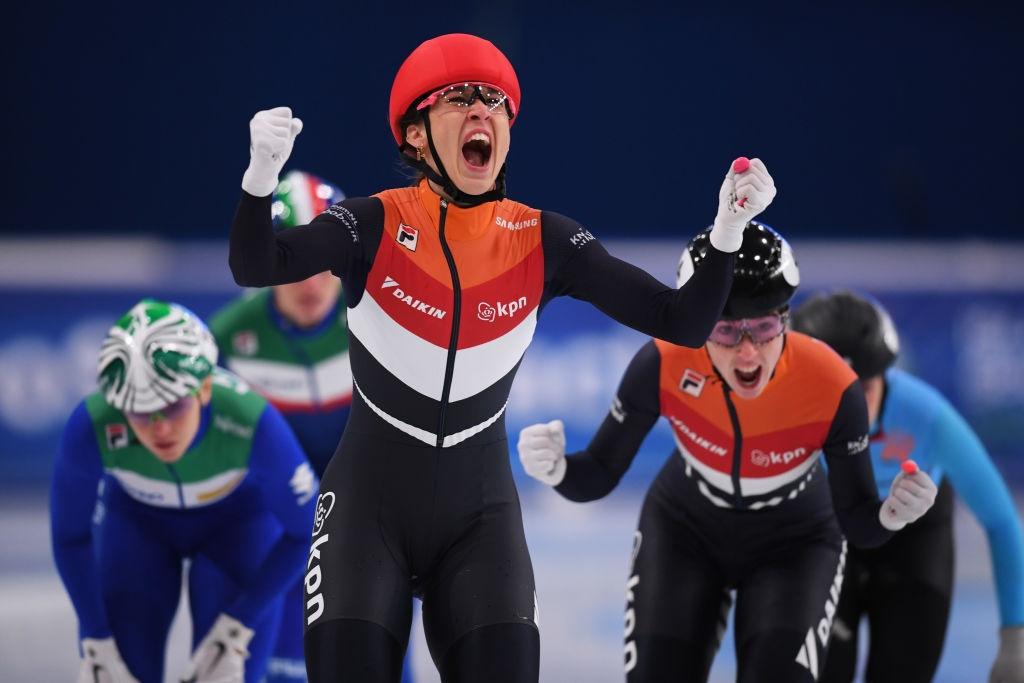 Suzanne Schulting leaves Hungary with five gold medals, but says winning the relay with her teammates was sweetest of all © International Skating Union

"It was a great final," said Schulting.

"Lara was skating well and I was in a position to pass her in the last two laps and it was perfect for me."

The 1000m win was enough to give Schulting the overall championship, which she won with 102 points ahead of Italians Arianna Fontana and Martina Valcepina who eventually closed on 68 and 34 points respectively.

Schulting finished the weekend off by helping the Netherlands to victory in the 3000m relay final ahead of Italy and Russia.

She struggled to hold back the tears afterwards, and even for someone as used to winning as Olympic 1000m champion Schulting, this weekend’s medal haul was something special.

"I’m super happy right now, it’s incredible. After the 1000m I could already say that I was the overall winner and that’s awesome, that’s great and that was the goal," she said.

"I was racing so well and I knew at the start of the tournament that I was in really, really good shape. But you still have to do it in the finals and that’s what I did. I’m really happy about my focus this weekend."

"It’s always better to celebrate with your teammates. You see them every day and you train with them every day so you’ve got a lot of emotions with them. It’s awesome that we [Schulting and Van Ruijven] can celebrate at 1000m but also in the relay," she said.

"I think that was the best thing of the weekend. I can win everything but if you don’t win the relay it’s kind of a disappointment. But right now we win everything and that’s awesome." 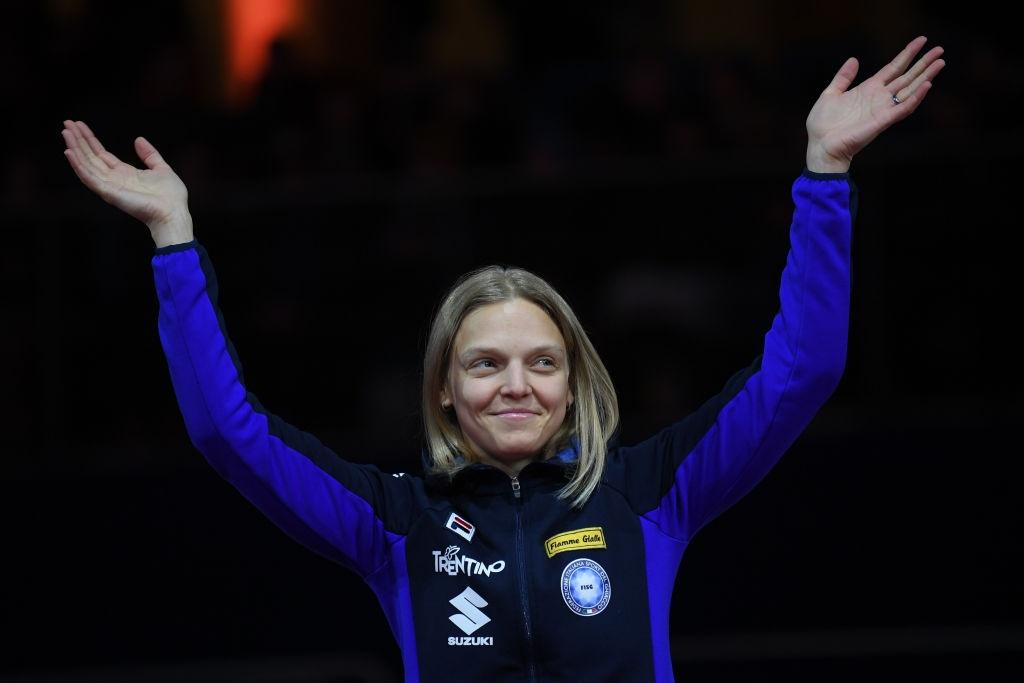 Fontana, above, returning to Short Track this season after a year away from the sport, showed she has lost none of her speed as she won the 3000m superfinal. The Italian leaves Hungary with a gold medal, three silver medals - 1500m, 3000m relay and overall - and a 1000m bronze.

In Focus: The best pictures of the ISU Four Continents Short Track Speed Skating - Montréal (CAN)