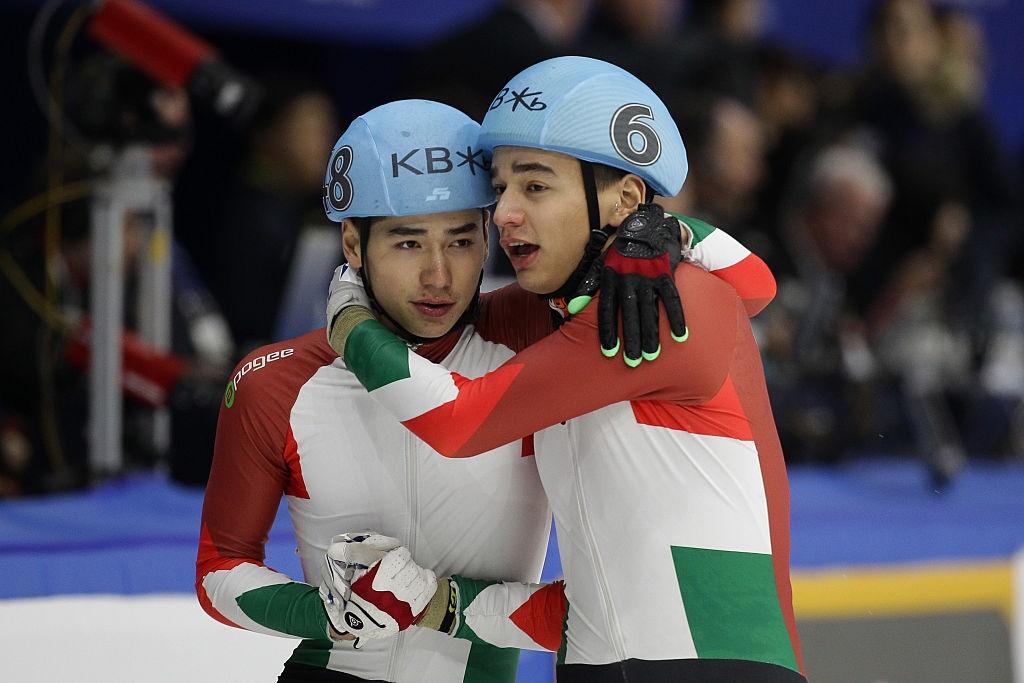 Q: How did you discover Short Track Speed Skating?
SSL: We started skating when I was 11 and he (Shaoang) was 8.
SL: So we started in 2006 and we were just like normal kids, like usually other people, get on the ice and try to skate but always fell.
SSL: Fall down, stand up. Fall down, stand up.

Q: Where did you start?
SSL: It all started in Hungary; before we were swimming. We did that for one or two years but we always got sick from the water and used to always have a cold, it wasn’t really good. It was more bad than good for us so we tried to swap to other sport. We were looking for different choices in Hungary and we just found short track, I don’t know how it happened.
SL: We just found it because of our parents. Our dad is from China and they came to Hungary around 40 years ago. Our father saw that our skating wasn’t improving in Hungary so we decided to go to China to try and when we went back to Hungary the coaches could really see the difference in how we skate.

Q: How long did you go to China for?
SSL: We were really lucky, when we started in 2006 there was a World Championship in Hungary and the Chinese team came and my dad, being Chinese started speaking with them, helped with different things in Hungary and getting to know the country. They said since your two sons are Chinese they should come train in China. It sounded good to my dad so he decided to take this chance to bring us to China and we were training there for one and a half years. Before our results weren’t really good, as I said always falling and standing up. After that time we came back from China and we won every competition.

Q: You won these races in Hungary or outside of the country?
SL: In Europe, these were small races like Danubia Cup. We won almost everything.
SSL: We wanted to continue and get better results and get our level higher so we continued to work hard together. In 2012 or 2013 we got a new coach, she is from China; her name is Lina Zhang, she has worked with us for years now. I think our biggest results have been thanks to her because she is a really good coach. Me and my brother worked really hard for our results too so I think it was teamwork from the three of us. Obviously we got other people we get help from. She came from China to coach us and step by step we have been moving up the infinity stairs just trying to get better. We work hard at home too. It is really good that I have my brother because we motivate each other. If we need to wake up early for training and I don’t really want to because I’m tired or sleepy, I know my brother is going to wake up and that makes we want to wake up too.

Q: A big part of your sporting career has been together?
SL: Yeah, from swimming and then skating together. We started almost everything together.
SSL: We don’t really have a big age difference. Although I am the oldest we started at the sport at the same time, he was just a little younger. 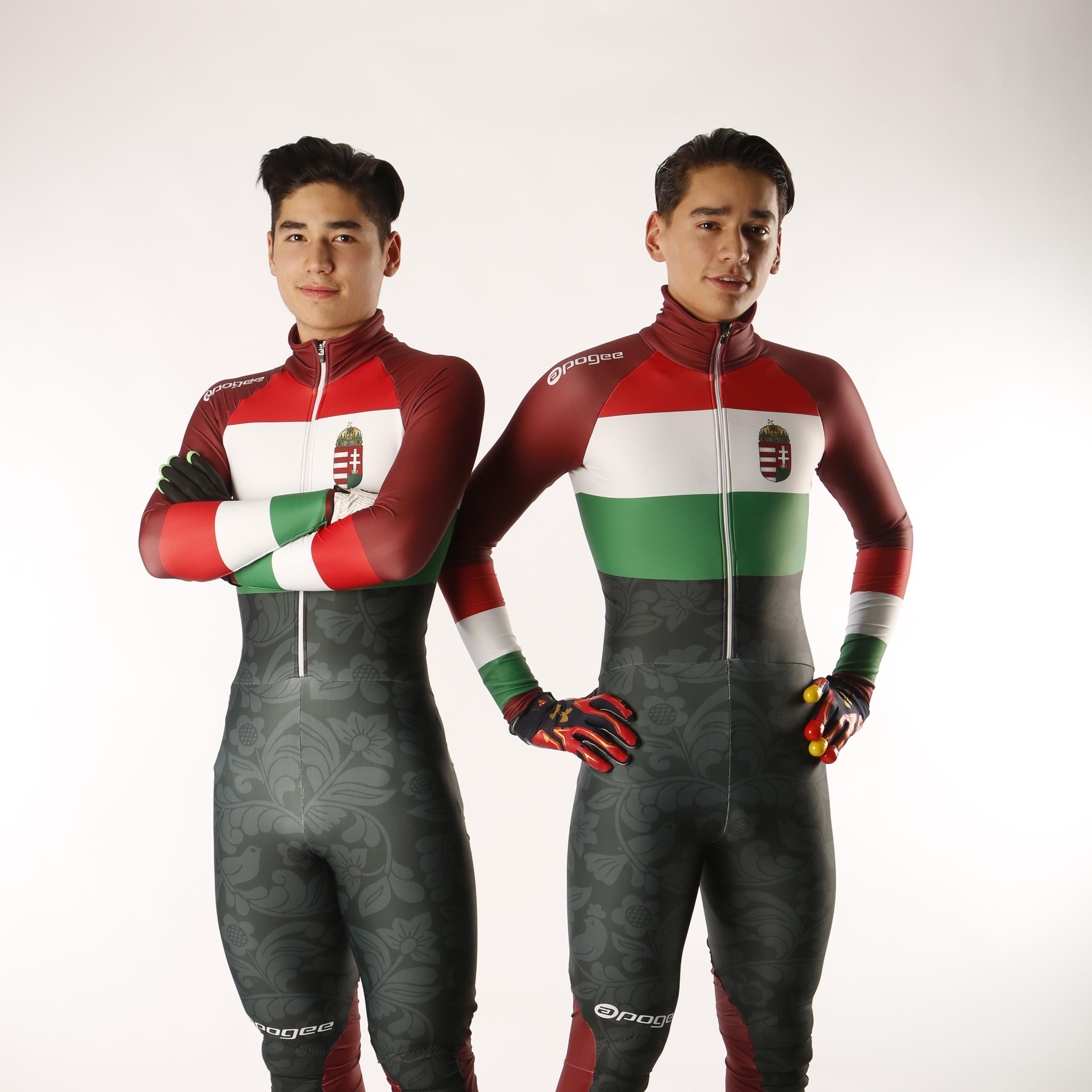 Q: Do you always travel together; share a room when you are travelling?
SSL: When we were kids we would share a room. We are sharing everything all the time, travelling together all the time. Sometimes we don’t sit together on the plane but that’s about it.
SL: Usually when we come out to a race we are always together.

Q: You obviously have a close bond, how is the relationship with the other team members?
SL: Our teammates also have brothers and sisters so they can understand how this type of family relationship works.
SSL: I’m sure they don’t mind.

Q: Who got their first ISU medal?
SSL: I think it was me, in 2013 in Warsaw at an ISU World Junior Championship. I got a Bronze medal from the 1000m, I think it was then!

Q: Do you think you need luck on your side in Short Track?
SL: yes 100% you do! Skaters need to get the technique, the muscles, experience of the races. After this there is a level of luck in the races.
SSL: when I’m racing, I think how should I race perhaps sit at the back and just wait for something to happen, a little push or a little fighting in the front and wait for your opportunity.  Some people call it luck, others might call it strategy. It’s the same thing.

Q: you are competitors in the individual races but team mates in the Relay. What is your mind set when you go into these races?
SL: we do not think about pushing each other out or that we are better than the other. We try to push each other to the end.
SSL: not a physical push of course, but a mental push. In the relay we really compete together as a team, we will adapt our strategy to give ourselves the best chance to win.

Q: How are you preparing and what are your goals for the Olympics next year?
SL: the Olympic Games are really close and every day they are getting closer. The pressure is getting harder, but I think we can handle it. We try not to think about the Olympic Games first, we have other races to think about and the qualification races next season. So we are focused on that first.
SSL: this pressure comes a lot from the media who keep saying that we are going to get medals. Last year we got good results so everyone is expecting us to medal. But no one has that power to see the future so anything can happen. We are going to work hard of course.

Q: Are you aiming for an Olympic Gold medal?
SL: every athlete’s biggest dream is the gold medal from the Olympic Games.
SSL: every kid including us was dreaming of an Olympic medal especially a gold medal. But when you are getting better results you start thinking differently. You don’t think you will go there and get a gold medal, you want to do your best. We are not going to change anything, we will work the same way and just as hard. It doesn’t matter who gets a medal because Hungary has never won an Olympic medal, nor has anyone in my family. So either way we will make everyone proud. 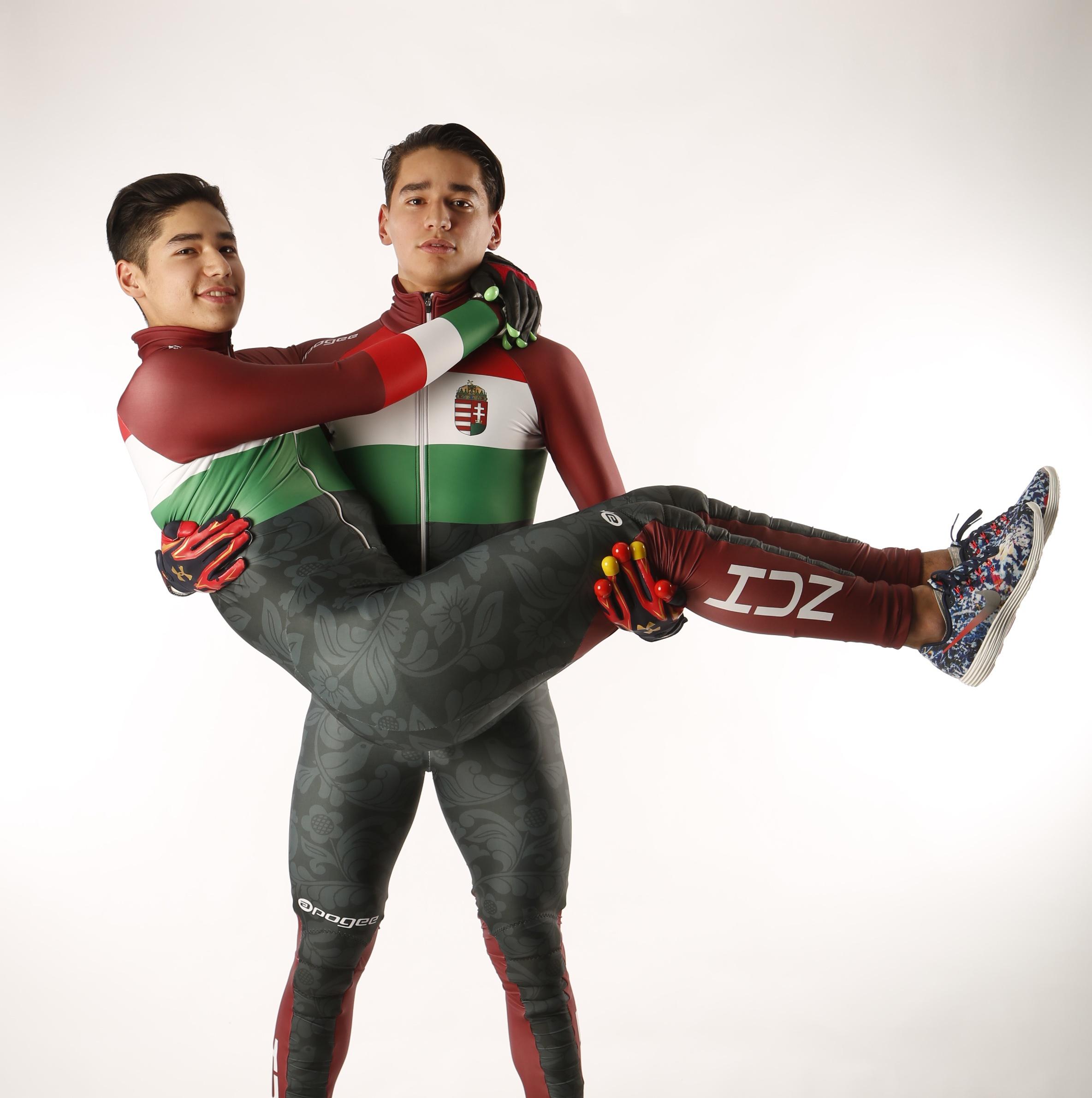 Q to SSL: which is Shaoang’s favorite song of the moment?
SSL: He has a lot of songs! He doesn’t really have a favorite as he listens to a lot of music and changes every week.  But his favorite style of music is rap and pop music.

Q to SL: what is your brother’s favorite pizza toping?
SL: Hawaiian, with ham and pineapple.
SSL: I really like all pizzas but I especially like the Hawaiian pizzas.

Q to SSL: if your brother could learn any language, which would it be?
SSL: We speak Hungarian, Chinese and English but I would say Russian.
SL: if I could I would learn all the languages but it’s impossible I know. I can’t choose only one.

Q to SL: if Shaolin won the lottery, what would he spend it on?
SL: I think he would leave Hungary and he would find a better place like Hawaii or the Bahamas and just live there. He would probably like to buy a house there.
SSL: No, I would buy a car first! A really nice one. Then I would move somewhere else, maybe England.

Q to SSL: According to your brother, who would win in a fight between Spiderman and Batman?
SSL: He would say Spiderman, actually no he would say Batman. Because he is smarter!
SL: Spiderman is from Marvel and Batman from DC, so they can never meet and fight each other! But if I had to choose, it would be Batman.

Q to SL: which exercise or training drill does Shaolin dislike the most?
SL: I think he hates stretching.
SSL: I find stretching really hard that’s right. I’m not very flexible so I find it painful.

Q to SSL: who scares Shaoang the most?
SSL: Me!
SL: he does scare me the most!

Q to SL: you guys travel a lot, which is Shaolin’s least favorite way of travelling?
SL: If it’s a long journey I would say by bus.
SSL: yes bus or trains for long journey are the most annoy thing.

Q: Thank you very much for the interview and good luck for the rest of the