Krol and Mantia save the best till last

Thomas Krol (NED) won his career first World Single Distances Championships gold with an impressive track record in the 1500m in Inzell on Sunday, before Joey Mantia (USA) brought four days of thrilling competition to a close by retaining his Mass Start title with a spectacular display of wit and power in the final stages.

Krol on a roll

Sverre Lunde Pedersen (NOR) was the first of the favorites to step on the ice in the ‘Race of the Kings’. The opening day’s 5000m champion soon threw his own race plan out of the window. “My goal was to skate two laps under 27 seconds and I did 25.7 and 26.4, so I was way ahead of that schedule,” he said. Pedersen finished off with a stunning 27.2 lap to finish in 1:43.16, breaking the track record by more than a second.

With five of the 12 pairings still to come, the 26-year-old Norwegian then had to sit and wait.

Before Krol faced Denis Yuskov (RUS) in the tenth pairing, no one had matched Pedersen’s time, but the 26-year-old Dutchman was on fire. With 24.9 and 26.2 in the first two full laps he left Yuskov standing and took a solid advantage over Pedersen. “He had too big a gap before the final lap, I knew he would break my time at that moment already,” Pedersen said. And so did Krol. Despite a slower final lap (28.1), he finished 0.58 seconds ahead.

Yuskov struggled but kept fighting. Closing on Krol in the final lap, he stopped the clock at 1:43.20 to take the bronze medal. “I was still tired after yesterday’s 1000m,” said the 29-year-old Russian. “My legs were sore, that’s why I made some little mistakes. I had hoped for more, of course, but I have to be satisfied with the bronze regarding how my legs felt today.”

In the final pairing, defending champion and Olympic gold medallist Kjeld Nuis (NED) could only manage 1:43.60, to finish fifth. 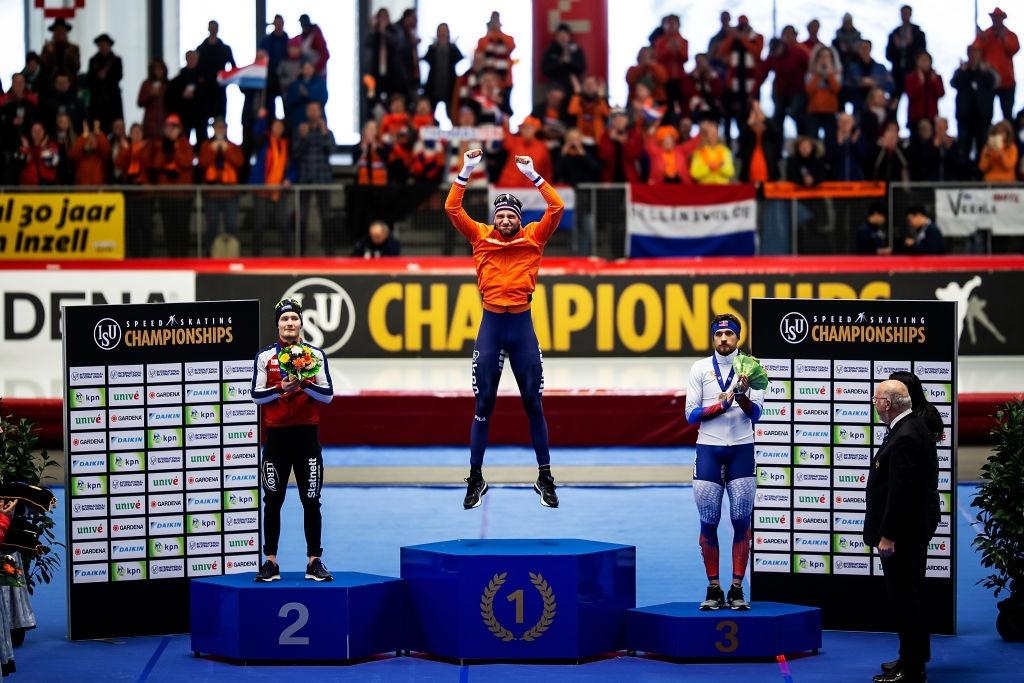 Krol said his first world title made amends for his second-place finish in Saturday's 1000m. “When I crossed the finish line yesterday, I was actually more excited because I thought my time would be good enough for gold, so when I crossed the line today, I celebrated modestly. I did not want to cheer and see someone else beating my time afterwards again.

“In December I won my first World Cup gold medal with a similar race and that gave me the confidence that I could beat anyone, and now I’m world champion. That’s still a little bit hard to believe.”

Cometh the hour, cometh the Mantia

The Men’s Mass Start was as spectacular as it was chaotic. Defending champion Joey Mantia watched it all happen and relied upon his experience to run away with gold in with a strong move in the final lap. Cheon-Ho Um (KOR) and Jaewon Chung (KOR) took silver and bronze.

Mantia, 33, said: “I spent the last eight or nine laps watching people really fight the turns, so I just relaxed, and did not use too much energy.

“With three (laps) to go things were together still, and I was looking, ‘Am I going to make a move here?’ I felt pretty good. Two (laps) to go came around and then the Koreans were moving up. I knew they were going to be the two to key off of, so I made a move to the outside and people were falling everywhere and I thought, ‘OK, I'll take it.’

“I took that last corner wide and I took advantage of them bumping into each other.”

Sáblíková on top of the world with tenth 5000m title