After the single distance specialists had their chance to shine at the Beijing 2022 Olympic Winter Games last month, versatility and consistency will be required over four distances at the ISU World Speed Skating Championships 2022 in Hamar. In the Allround tournaments short and long distance performances are added up in one overall ranking, and in the Sprint Championships Skaters have to perform well over the course of two 500m and two 1000m races.

The ISU World Speed Skating Championships will start with the Sprint format on Thursday and Friday with a 500m and a 1000m race for both genders on each day the points after the four races are added up to crown the winners. Competition for the Allround titles will take place on Saturday and Sunday. The principal is similar to the Sprint format, except that the distances are both long and short in the Allround. The Men will skate the 500m and the 5000m on the first day, followed by the 1500m and the 10,000m on the second day. The Women face the 500m and the 3000m on Saturday, followed by the 1500m and 5000m on Sunday. Apart from the individual races, there isalso a Team Sprint competition for both genders on Saturday.

After having won 500m silver and 1000m gold at the Beijing 2022 Olympic Winter Games, Miho Takagi (JPN) would have been the main favorite to retain the World Sprint title she won in Hamar two years ago, but the Japanese chose to aim at the World Allround title this time.

With Takagi competing in the Allround races and with two-time Champion Nao Kodaira (JPN) absent, and the Russian sprinters not invited due to the war in Ukraine, there’s an open field for Jutta Leerdam and Femke Kok. The Dutch youngsters have a different approach to the Sprint Championships. Leerdam, who won Olympic silver in the 1000m in Beijing last month, hopes for control damage in the 500m and gain time in the 1000m. Kok on the other hand will try to lay a solid foundation in the 500m. 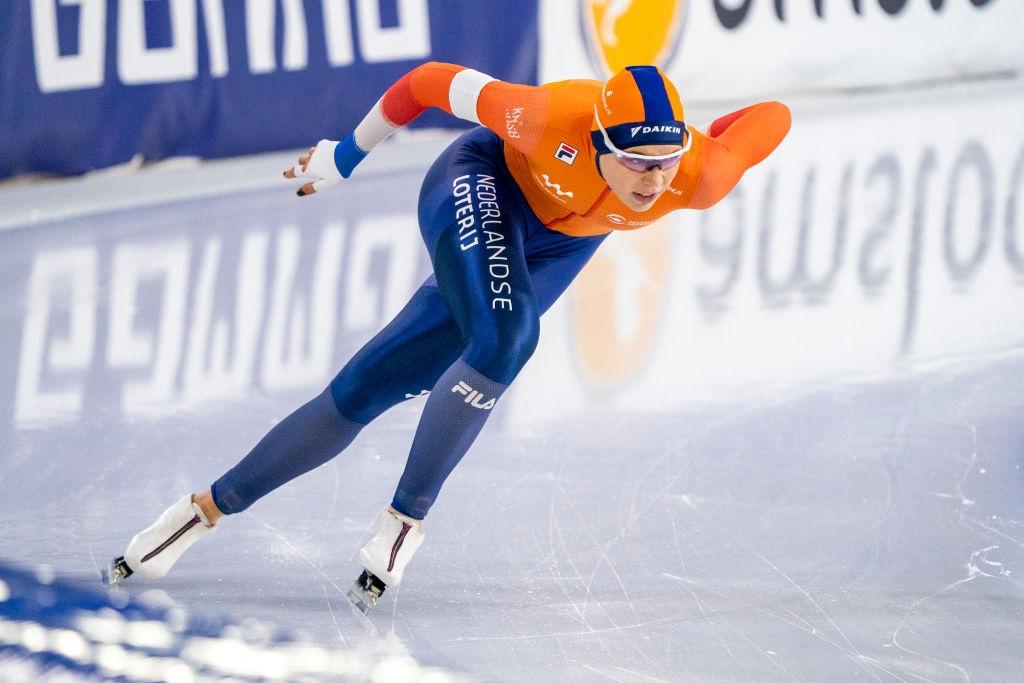 Jutta Leerdam (NED) during the 2021 European Championship Allround and Sprint in Heerenveen, The Netherlands. © ISU

Most other contenders, like 2019 European Sprint Champion Vanessa Herzog (AUT), also favor the 500m. Poland has a strong sprint squad with Andzelika Wójcik, Kaja Ziomek and Karolina Bosiek, who are also favorite to win the Team Sprint event.

In the Men’s sprint tournament, there’s also a distinction between those who favor the 500m, and those who prefer the double distance. Laurent Dubreuil (CAN) is more of a 500m specialist, but he took Olympic silver medal in the 1000m, making amends for a disappointing fourth place in the shortest distance. The Canadian silver medalist from the 2020 World Sprint Championships in Hamar seems to be the complete package when it comes to the sprinters at the moment, but competition will be tough.

With Tatsuya Shinhhama (JPN), Kai Verbij (NED) and Håvard Lorentzen (NOR), Dubreuil faces three men, who previously won the World Sprint title. Title defender Shinhama hopes to come back strong after his disappointing 20th and 21st places in the 500m and 1000m in Beijing, while Verbij is aiming at revenge after his Olympic 1000m dream was shattered by an unlucky change-up with Dubreuil at the final backstretch. Coming from the inner lane Verbij sacrificed his own medal chances to make way for Dubreuil, who thanked the Dutchman for what he labeled a ‘really professional and classy move’.

Lorentzen doesn’t have anything to make up for in Hamar. The 2018 World Sprint Champion celebrated an Olympic 1000m bronze medal in Beijing to leave three season’s of injury behind him, and he will be up for another high note in front of a home crowd in Hamar. Together with Bjørn Magnussen and Henrik Fagerli Rukke, Lorentzen will also aim for the Team Sprint title.

The women’s Allround races are set up for a classic battle between speed and stamina. After winning the 3000m, 5000m and Mass Start events in Beijing Irene Schouten (NED) seems to be the top favorite, but will her long-distance-dominance be enough to keep Miho Takagi‘s short distance speed at bay? Takagi has experience and won the World Allround title in 2018.

Schouten came second in the European Allround Championships, behind Antoinette de Jong (NED) last year. De Jong will be another force to reckon with in Hamar. The 26-year-old Dutchwoman showed versatility in Beijing, with 1500m bronze, 8th place in the 3000m and 5th place in the 1000m.

Patrick Roest (NED) is gearing up for a fourth consecutive World Allround title in the Men’s tournament. Having won the Championships in 2018, 2019 and 2020, the 26-year-old Dutchman followed the footsteps of senior team-mate Sven Kramer (NED), who won the title a record nine times between 2007 and 2017. Kramer will not skate in Hamar, having competed in the final international race of his career during the Mass Start at the Beijing Olympics.

To win his fourth title, Roest has to build a big gap in the 500m and 1500m to hold off Nils van der Poel (SWE) in the endurance distances. The World Championships in Hamar will probably be Roest’s last chance to beat his Swedish nemesis, because the Olympic 5000m and 10,000m Champion announced he will hang up his speed skates following his Beijing success.

Takagi saves the best for the last to win 1000m