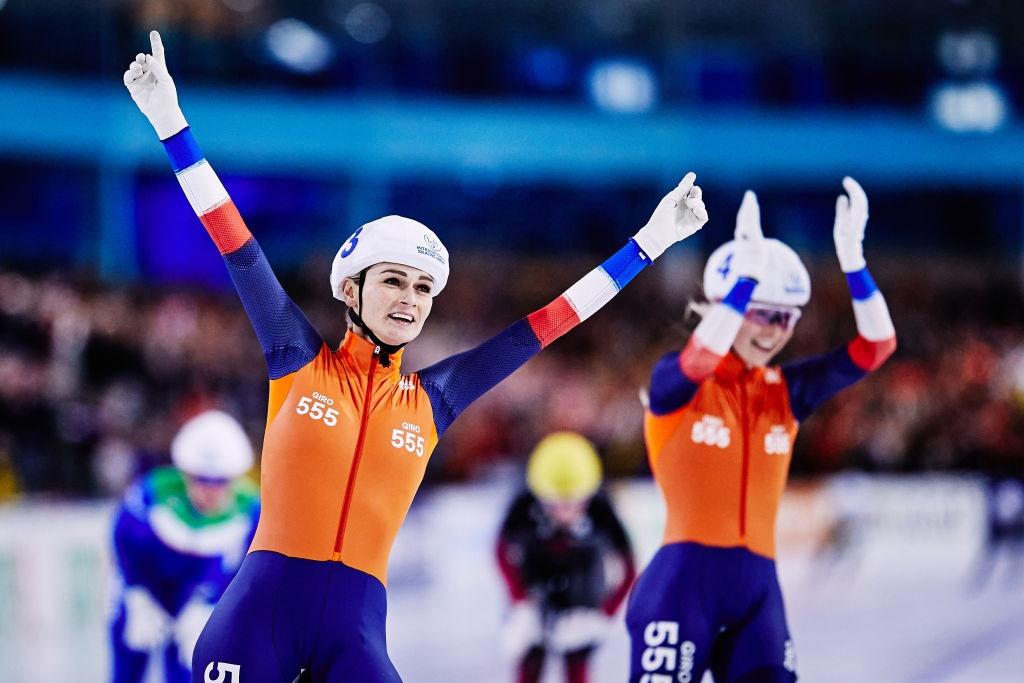 
“This was one of the toughest weekends (of the season), Schouten said, coming off the ice after confidently winning the Mass Start race ahead of team-mate Marijke Groenewoud (NED) and Francesca Lollobrigida (ITA).

“I already felt roasted after the Olympic Games and I hung on by the skin of my teeth on the final day of the World Allround Championships last week,” Schouten said. “I even (considered) whether I was going to start here, but we haven’t been able to skate in front of a packed Thialf stadium this season yet, so I’m happy I did skate eventually.”

Despite being tired, Schouten’s Mass Start win was immaculate. With two laps to go, Groenewoud made pace and Schouten perfectly finished the job of her lead-out team-mate.

Schouten explained: “During the race I already sensed that Ivanie Blondin (CAN) and Lollobrigida were not fresh either, and when Marijke (Groenewoud) made the move, I saw that we immediately had a gap over the rest of the field.” 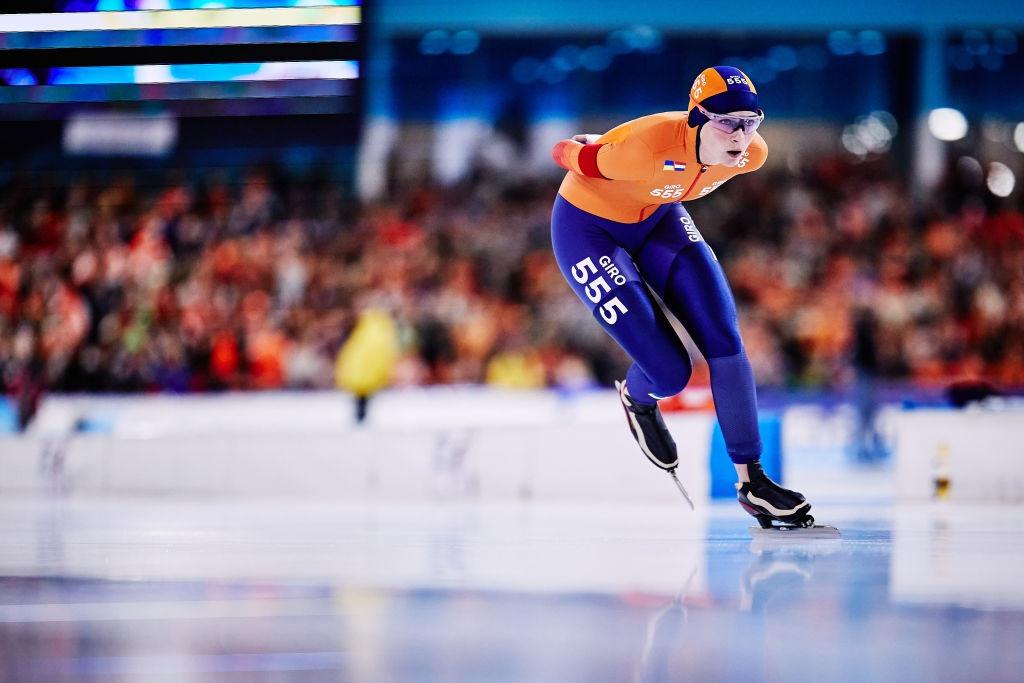 Earlier on Sunday, Schouten had also won the 3000m. She kept Ragne Wiklund (NOR) at bay by a mere 0.33 second margin. Wiklund had skated a time of 3 minutes and 57.15 seconds before Schouten took the ice. Although the Olympic Champion had slower split times up until the final lap, she had never harboured any doubts about winning the race.

“It was all under control,” said Schouten. “I knew that she finished with a 32-second lap and three laps before the finish Jillert (coach Jillert Anema) already indicated that I would make it if I kept skating as I did, and I even felt that I could accelerate.”

Schouten went into the final lap trailing over a second, but sprinted to victory confidently, also taking home the 3000m World Cup Trophy ahead of Wiklund and Lollobrigida.

Wiklund had particularly enjoyed skating in front of a packed stadium, after having won her 1500m World Title in front of zero spectators in last season’s Thialf speed skating bubble.

“We had such a great race and it's my best race for sure here in Thialf,” said Schouten. “It’s extra special to be here and be able to stand on the podium again in front of a full Thialf, and get some of the feeling that I missed out on last year.”

Seeing Schouten race, Wiklund didn’t have much hope for gold herself: “I was pretty convinced that she would do a really great last lap, as she always does, so it wasn't unexpected to beat me in the end.” 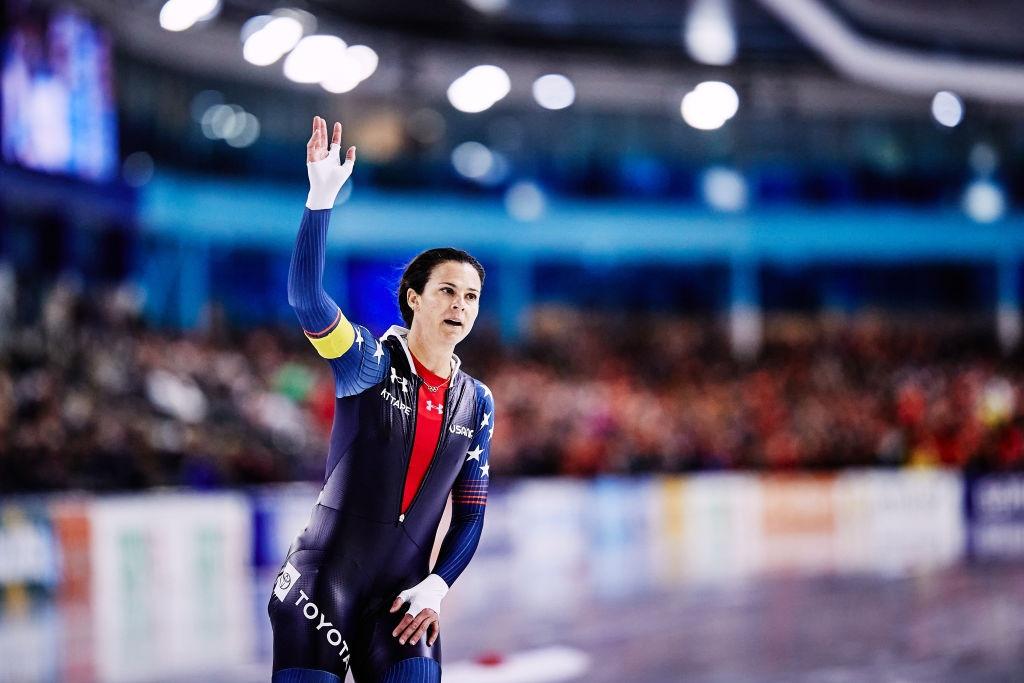 Hildebrand trained the two skaters, as well as the men’s 1500m World Cup Trophy winner Joey Mantia, when they started as kids on wheels in Ocala Florida, long before switching to the ice later on in their careers.

“It was the first time she saw us skate in Thialf,” Bowe said. “And then for her to see the three of us thrive and win World Cup Trophies, that’s just amazing.”


Despite winning the World Cup Trophy, Bowe did not win the final race in the 1000m. Olympic Champion Miho Takagi (JPN) was just a little too strong, finishing in a time of 1 minute and 13.28 seconds on Sunday.

“Today Miho has shown her clear dominance in the past handful of 1000s, so nothing but respect there,” said Bowe. “It was such fun to skate in Thialf and getting silver today, another overall World Cup title, that’s incredible.” 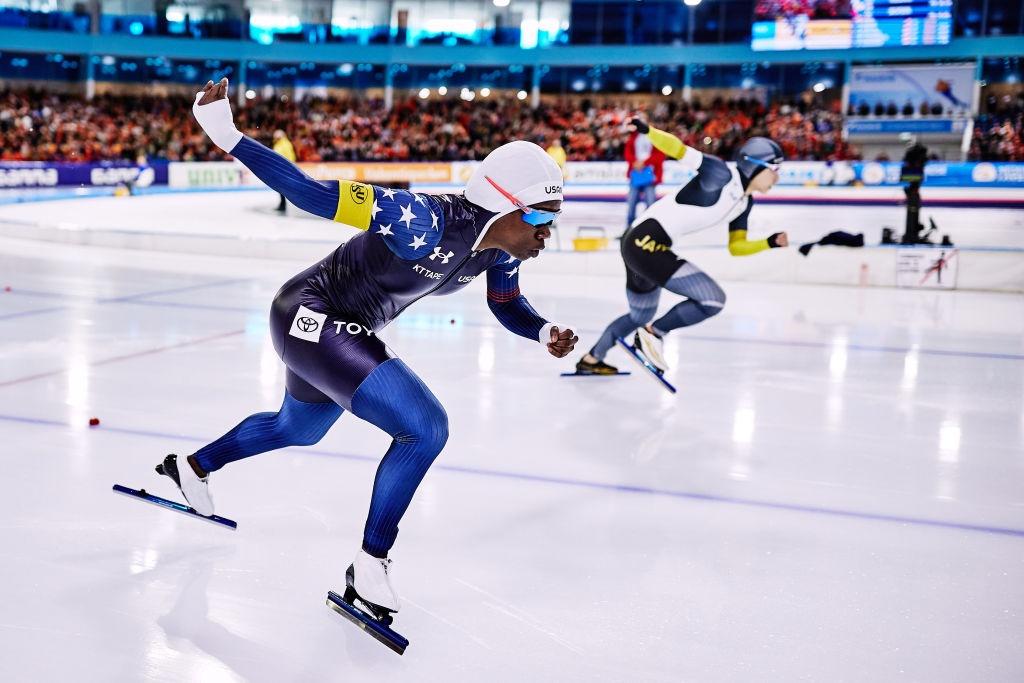 Little over an hour earlier, Bowe had also come in second in the 500m, with Jackson coming out on top to take home the World Cup Trophy. “It was really fun to be on the podium with Erin,” Bowe said.

With 37.32s Jackson skated the exact same time as she had done on Saturday. “(I had) a better start, but a worst lap,” she laughed.

Bowe was almost half a second faster than she had been on Saturday, clocking 37.55s. Korea’s Min Sun Kim took bronze in 37.58s.

Jackson had enjoyed sharing the glory with Bowe as much as her team-mate: “That was really, really amazing. I saw her warming up and I was like, yeah, she looks fast today,” said Jackson.

“It was really cool to see her pull out a podium today and it's really awesome to share the podium with her.”

After having won almost everything she could in the 500m this season, Jackson is setting new goals in speed skating. “I’m going to continue working on my technique, trying to be better technically. And then, hopefully, changing my skating a bit to be successful in the 1000m.”