Jordan Stolz (USA), in the footsteps of Shani Davis 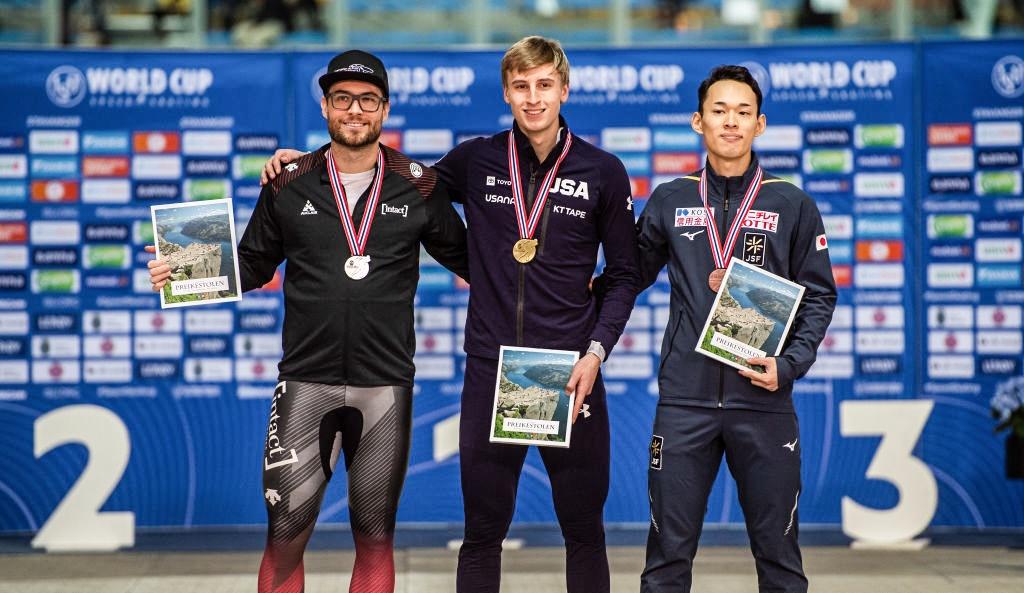 Jordan Stolz (USA), Connor Howe (CAN) and Zhongyan Ning (CHN) during the ISU World Cup in Stavanger, (NOR) @ISU

At age 18 years and 174 days, Jordan Stolz (USA) became the youngest male Speed Skater from any nation to have won an individual race at a World Cup event, when he claimed victory in the 1500m on 11 November 2022 in Stavanger, Norway. It’s time for an introduction of the fast rising star in international Speed Skating.

Short Track on the pond

Growing up in Kewaskum, forty minutes north of Milwaukee, Wisconsin, Stolz learned how to skate on the pond outside his parent’s house.

“I was watching the 2010 Olympics in Vancouver, especially the Short Track with Apolo Ohno (USA)”, Stolz remembers.

“My dad went outside to the pond and said: why don’t we do it right here? That’s when I started skating with my sister on a pair of hockey skates to begin with.”

Stolz’s two year older sister eventually quit skating, but Jordan went on, from a local club, to the nearby rink in Milwaukee, to national championships.

His parents could combine driving up and fourth to Milwaukee for Jordan’s Speed Skating training with work. Stolz’ parents were not involved in elite level sports themselves, but sports goes back a long way in the family.

“My grandfather came from Germany and he used to play a lot of soccer. My dad did track and field in high school. My parents have always been very supportive. 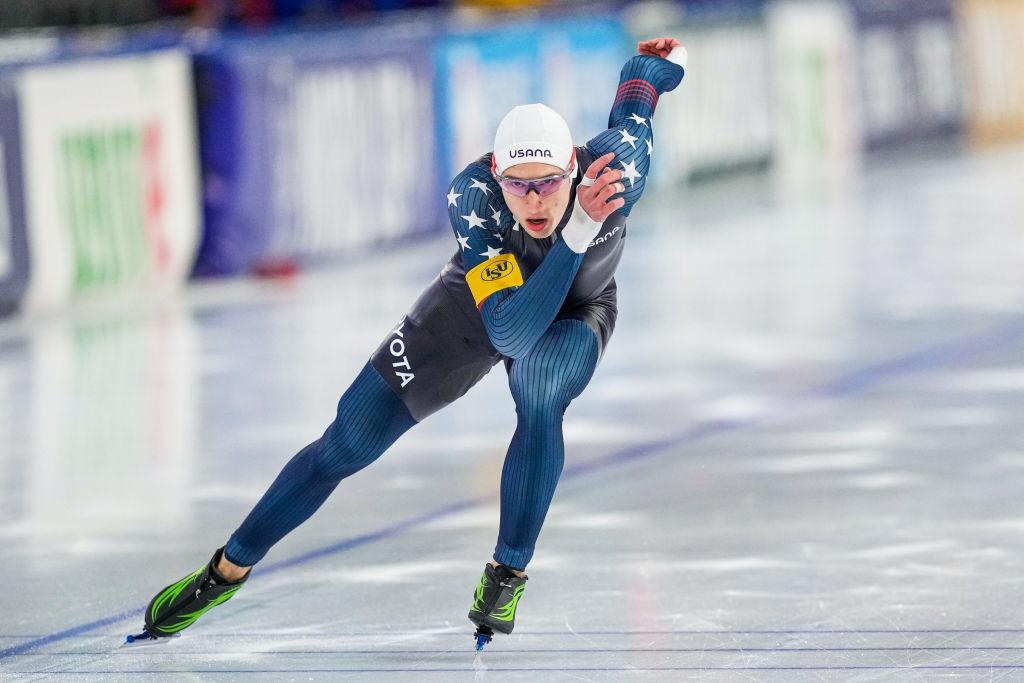 Family ties are important not only out of convenience. Being home is one of the reasons 18-year-old Stolz is still training in Milwaukee most of the time, instead of Salt Lake City with the rest of Team USA.

“It’s hard to move when you’re young. I think at this age it’s more important to feel comfortable and get good training in. Milwaukee is close to home and I like to go home after training.

“And I also feel that the slower ice in Milwaukee is better for training. In Salt Lake City there’s always good conditions. I feel like you get away with mistakes easier out there. Slower ice forces you to skate better.

“I do train in Salt Lake City sometimes, to get used to faster ice before World Cup competitions, but there’s also the altitude thing. I always feel more tired out there. Recovering between workouts takes longer.”

On the ice the most important people for Stolz were legendary coach Bob Fenn and multiple Olympic and World Champion Shani Davis (USA).

“I always wanted to skate like Apolo, then I saw Bobby coaching Shani Davis and there was (coach) Nancy Swyder and Brian Hansen. That crew really got me interested in long track.“

Stolz praises coach Fenn for making him work hard and making him headstrong. After Fenn passed away in 2017, Mike Woody took over and in 2018 Shani Davis joined in.

“When Shani quit Speed Skating after the PyeongChang Olympics, he decided to come back to Milwaukee. I’d always been close to Shani because of Bobby and we build up a close relationship in that time.” 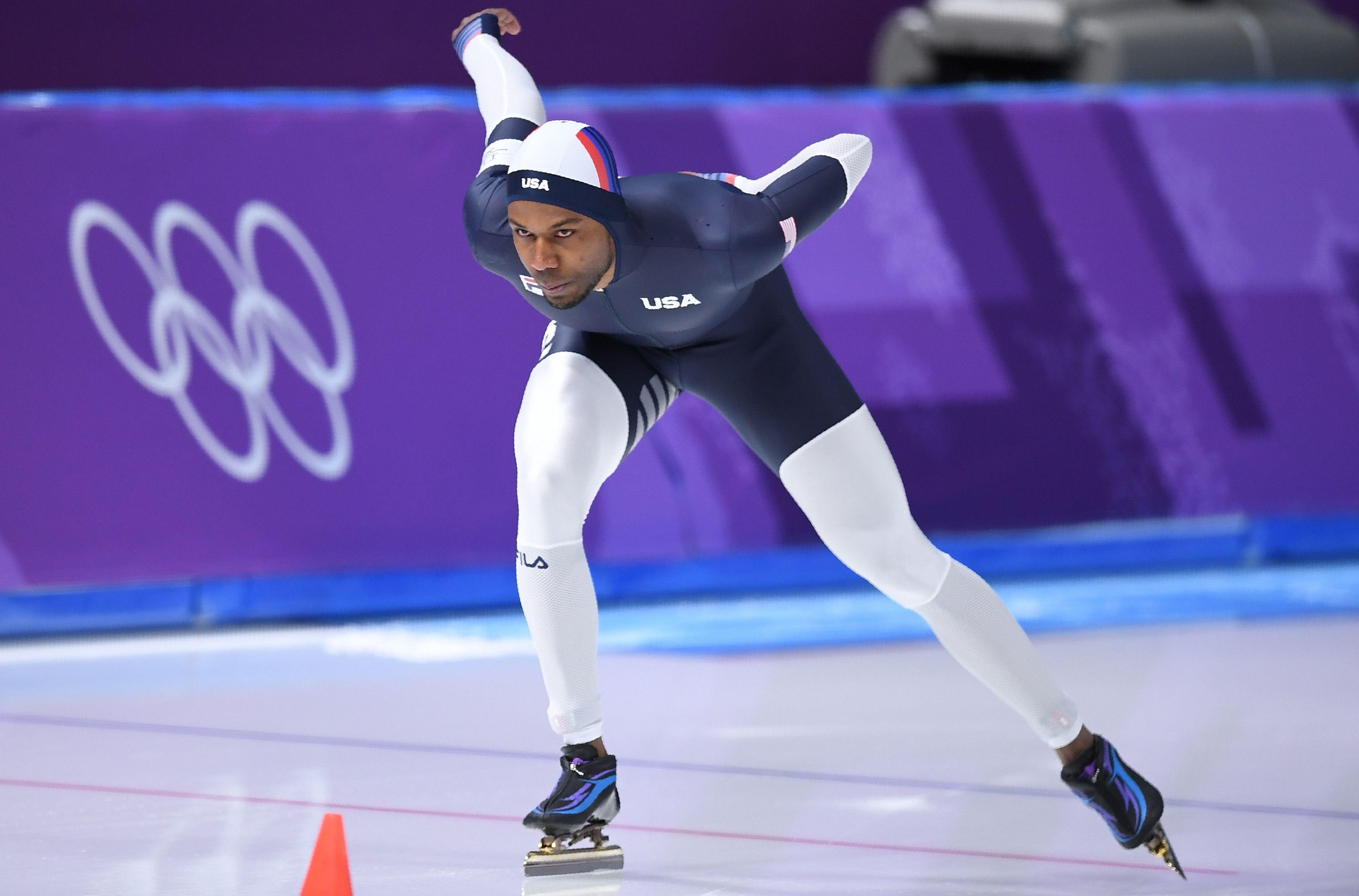 “Of course, even to this day I try to copy him, but also other skaters like Jeremy Wotherspoon (CAN) and Pavel Kulizhnikov (RUS).

“Shani has definitely been a big influence. He always used to tell me to have my own style of skating, but the fundamentals, proper technique, I definitely learned that from him. He was always there to help and he always gave me good advice.”

After Davis left Milwaukee to coach the Chinese national team, Stolz worked with coach Bob Corby in Milwaukke, while Matt Kooreman and Ryan Shimabukuro guide him at international races.

Although very ambitious, Stolz takes it one step at the time when it comes to setting goals. This spring he hopes to get his high school degree, after having done home schooling since fifth grade.

While his heart goes out to Speed Skating, graduating is important too. He says:

“I would say speed skating interferes with school pretty much.” 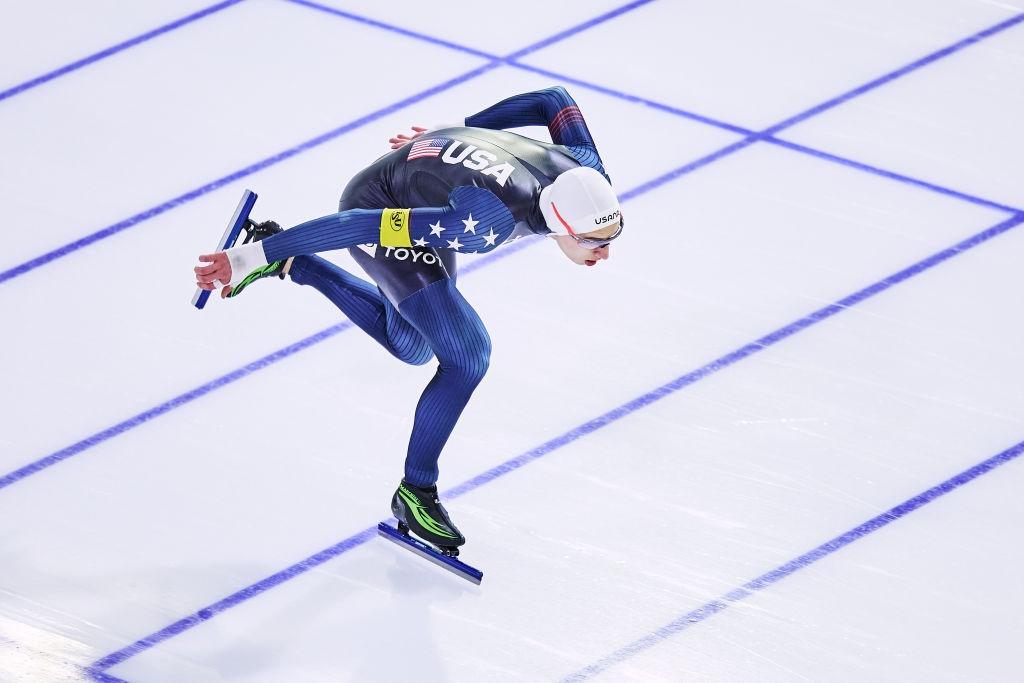 Still, there’s some big goals in Speed Skating this season too. Stolz:

“Of course I want to medal each time I start at a World Cup event, but I think my goals in training are more important then setting goals in racing. If I achieve my training goals, the results in racing will come as well.”

This is UpAgain: A Speed Skating Documentary