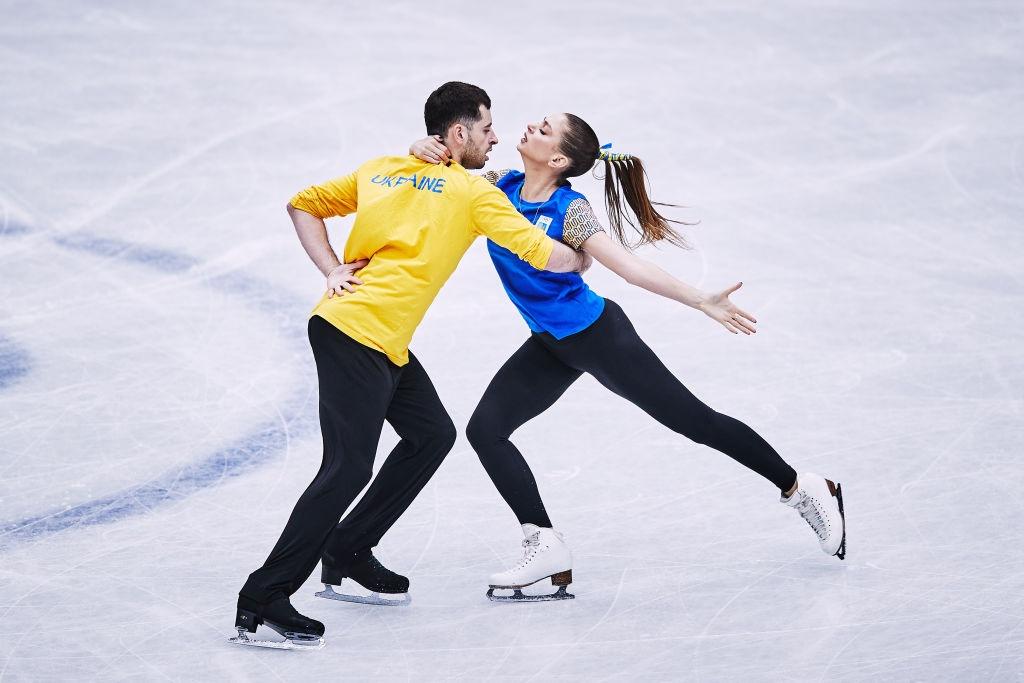 Ukrainian Skaters Oleksandra Nazarova/Maksym Nikitin, Ivan Shmuratko and Sofiia Holichenko/Artem Darenskiy touched hundred thousands of spectators in the ice rink and in front of the TV with their emotional performances at the ISU World Figure Skating Championships 2022 last March in Montpellier (FRA). The Skaters had left their war-torn country to perform in France and to bring across their message of courage and warning. 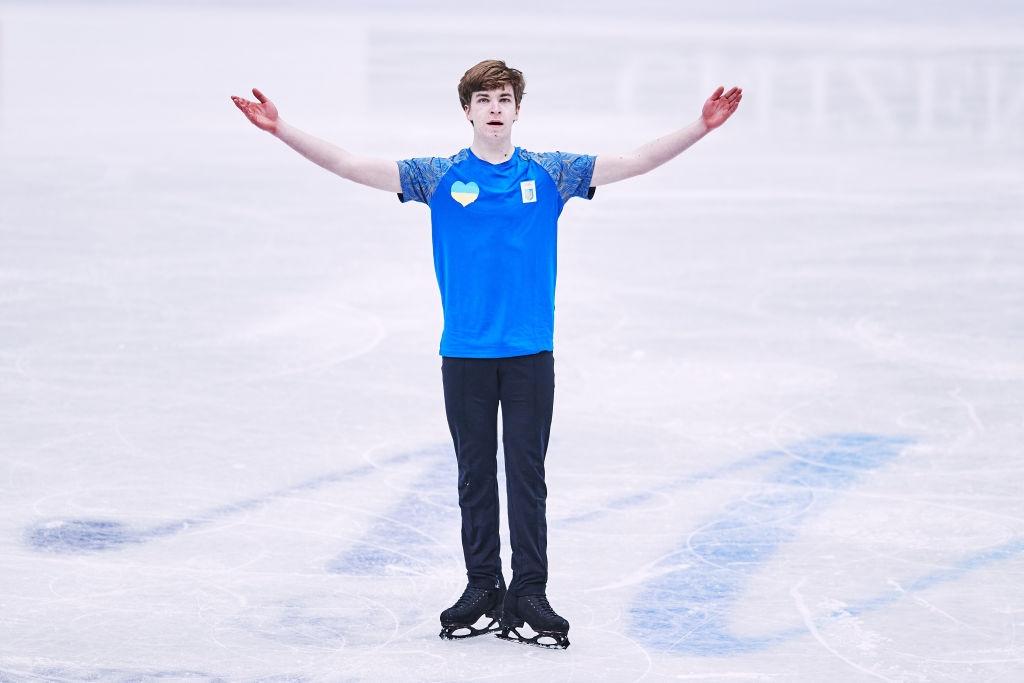 Three months later, the devastating war that Russia started in February is still raging in Ukraine. Soldiers and civilians are dying every day, people are losing their homes, millions of Ukrainians have become refugees. Many Ukrainian athletes have fled to Europe while others have returned home although it is not safe. More than 100 Skaters have left the country and are currently spread out all over Europe – from Poland to Germany, Denmark, Latvia, Estonia to Romania and some even fled to Canada. Whether they are in Ukraine or in another country far from home, most of the Skaters want to continue to train and are preparing for the coming season.

This goes as well for the top athletes who competed at the Beijing 2022 Olympic Winter Games and at the ISU World Championships. Following the Championships, Ice Dancers Nazarova/Nikitin were invited to take part in the “Dancing on Ice” TV show in Romania as choreographers for a month. “This show supported Ukraine a lot,” Nikitin recalled. “It was an unusual experience for us as we hadn’t done yet anything like this before.” The Skaters created each week five new programs for the participants of the show. After a month, the Ice Dancers then went to Vienna where they helped their coach Galina Churilova to choreograph programs for the Ukrainian Junior couples from their training group.

In May, Nazarova/Nikitin, who are originating from Kharkiv, were invited to the Japanese event tour “Fantasy on Ice”, where they performed alongside stars such as Yuzuru Hanyu (JPN) until the end of June. 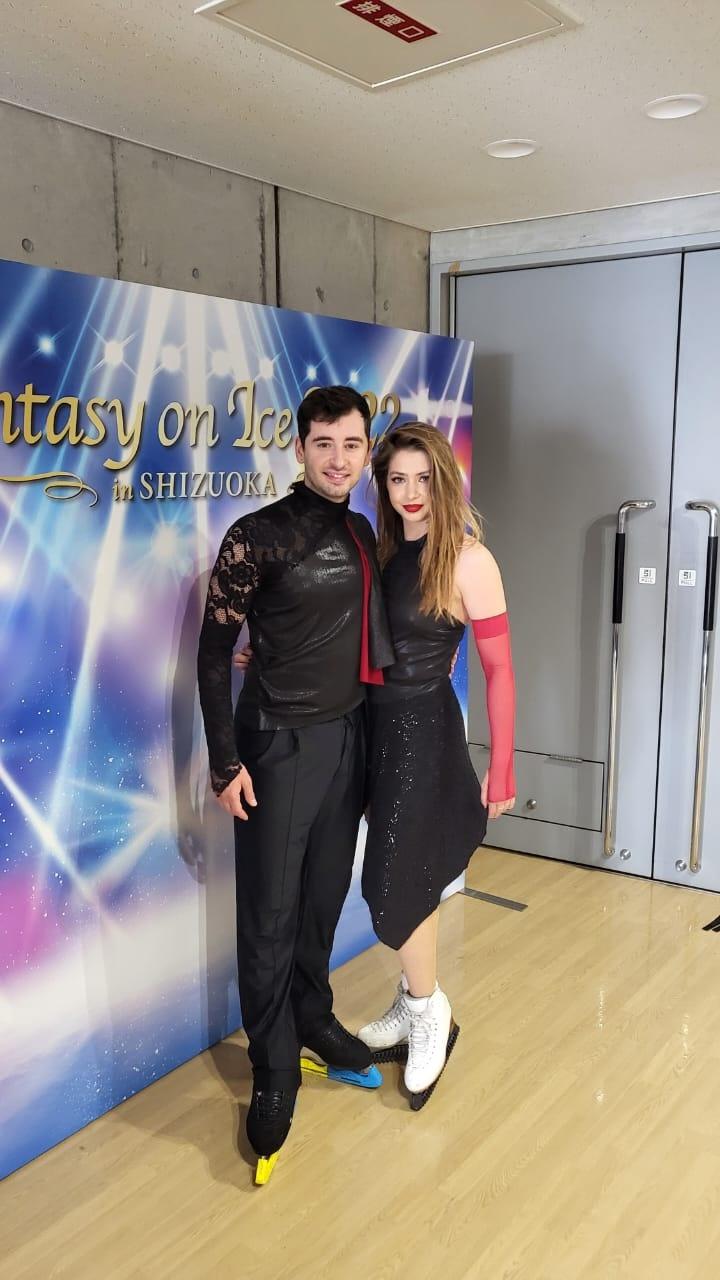 “We are really happy that we got this opportunity, because the atmosphere is great and there are a lot of interesting things. We were in four different cities and had three shows a day on three days. Japan is a very important country for each Skater,” Nikitin explained. The two Ukrainian Skaters felt much support during the shows. “There were a lot of people with Ukrainian flags and with each show there were more and more. A lot of people are writing to us on Instagram and there were even fans who did not get tickets, but came nevertheless to the venue to distribute Ukrainian flags. There were as well a lot of banners, which was very nice. We felt a strong support. Even when we went to shopping malls we heard Ukrainian music including those that we had skated to at Worlds.” The fellow in the show were very supportive as well. “They offered to help and they asked what they can do. There is probably not a single person in the world now that is not ready to help or at least to show compassion, because everyone knows very well what is happening,” Maksym Nikitin said. Nazarova/Nikitin are now planning to return to Europe but have not yet decided where to go and what to do exactly.

Teammate Ivan Shmuratko meanwhile is based in the ISU Center of Excellence in Oberstdorf, Germany, since May and training for the new season. 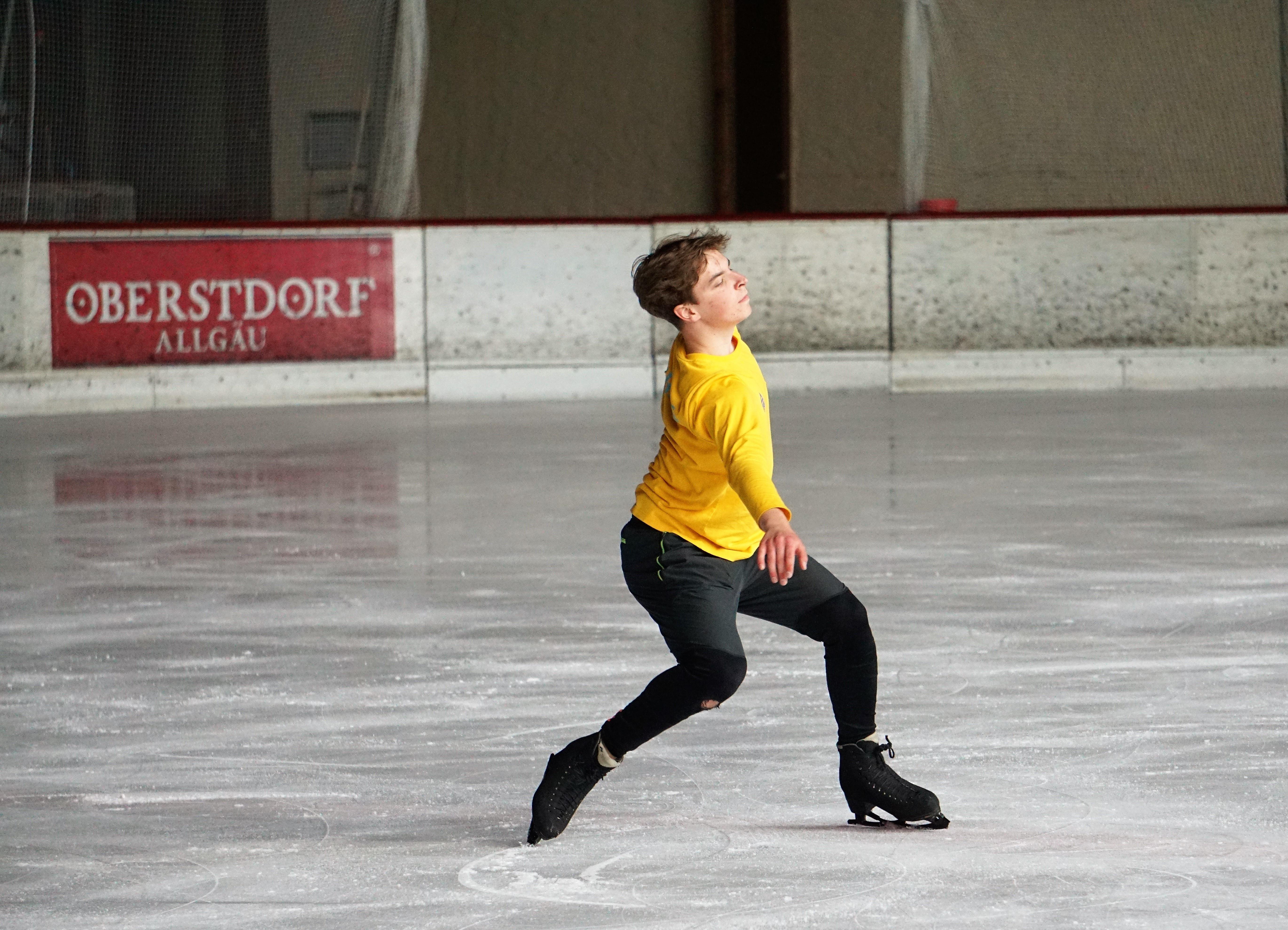 Right after the ISU World Figure Skating Championships, he stayed for some time in France with Ukrainian-born and now French Pair Skater Denis Strekalin in the Paris region. However, since Ivan’s mother and brother relocated to Bavaria, he decided to move to Germany as well to be closer to them. “I am working with Michael Huth and Robert Dierking and I am happy to be here,” he noted. But it is not easy to finance the training abroad. The Ukrainian Skating Federation cannot offer much funding. “Of course, the sport is not the thing to prioritize right now. I have a Polish foundation that is helping me throughout the season. Now I am looking for sponsors to maintain my training process,” the athlete shared. 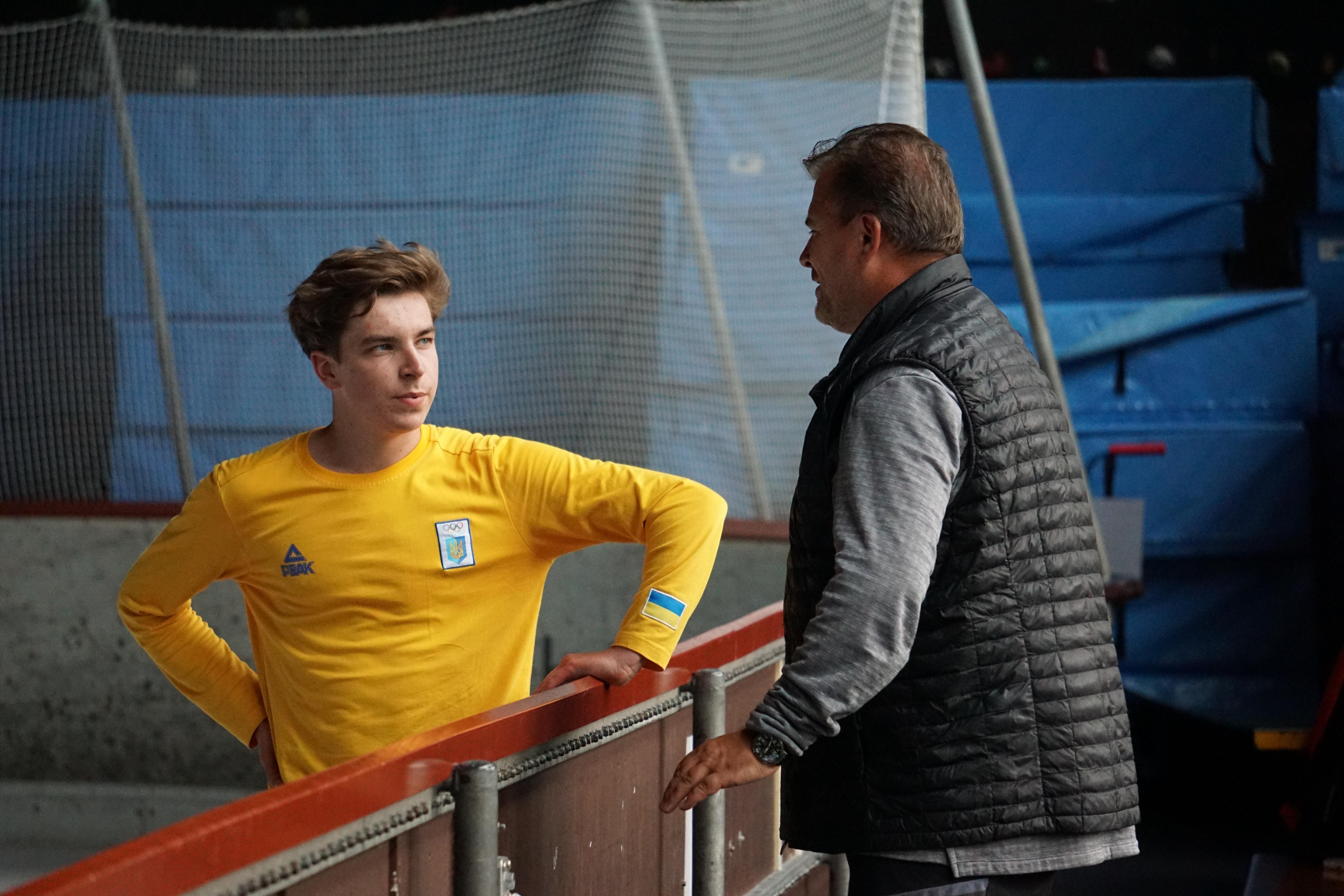 Ivan Shmuratko (UKR) and his coach Michael Huth at the ISU Center of Excellence in Oberstdorf, Germany. @ Tatjana Flade

Ivan Shmuratko is not the only Ukrainian in Oberstdorf. Ice Dance coach and choreographer Maria Tumanovska-Chaika has moved to the ISU Center of Excellence with her couple and ISU European Championships competitors Mariia Holubtsova/Kyryl Bielobrov. ISU World Junior Championships competitor Anastasiia Fomchenkova is there as well. Shmuratko’s long-time coach Marina Amirkhanova, who is originally from Kyiv, has relocated to Tallinn, Estonia, with some of her students. “My relatives and friends stayed in Kyiv, my daughter thank God lives in England,” the coach said. “It is more or less calm in Kyiv now, but we all understand that the war has not ended and expects that Russia will again try to seize the city. Even here in Estonia I feel alarmed as the Russian border is too close. To live in this atmosphere of alarm is very difficult for me. I am afraid that Russia will continue and try to attack the Baltic states and the Eastern European countries. Even my work does not distract me from these thoughts. It is hard for me to start my life from zero at the age of 62. I don’t know what to do. I want to return home to Kyiv, but it is too early,” Amirkhanova concluded.

It is not easy for the Skaters to be far from home while the war is going on. “We Ukrainians have to do everything to win as soon as possible. What I do the best is skating, that is my profession. I think for Ukrainian athletes it is important now to continue training, competing and to keep Ukraine on the international stage and to raise our flags on the podiums. It is really important for the support of our home,” Shmuratko shared. “I feel sometimes guilty for being safe when the people over there are dying. We just need to continue our work. It's very important to all my family who is there (in Ukraine). For me it helps to speak with people. Sometimes it is really hard. I am listening a lot to Ukrainian music which helps me to feel at home. I am preparing one of the programs as a tribute. It is really important to do the work, to be on the ice, to be active, not to feel guilty.” 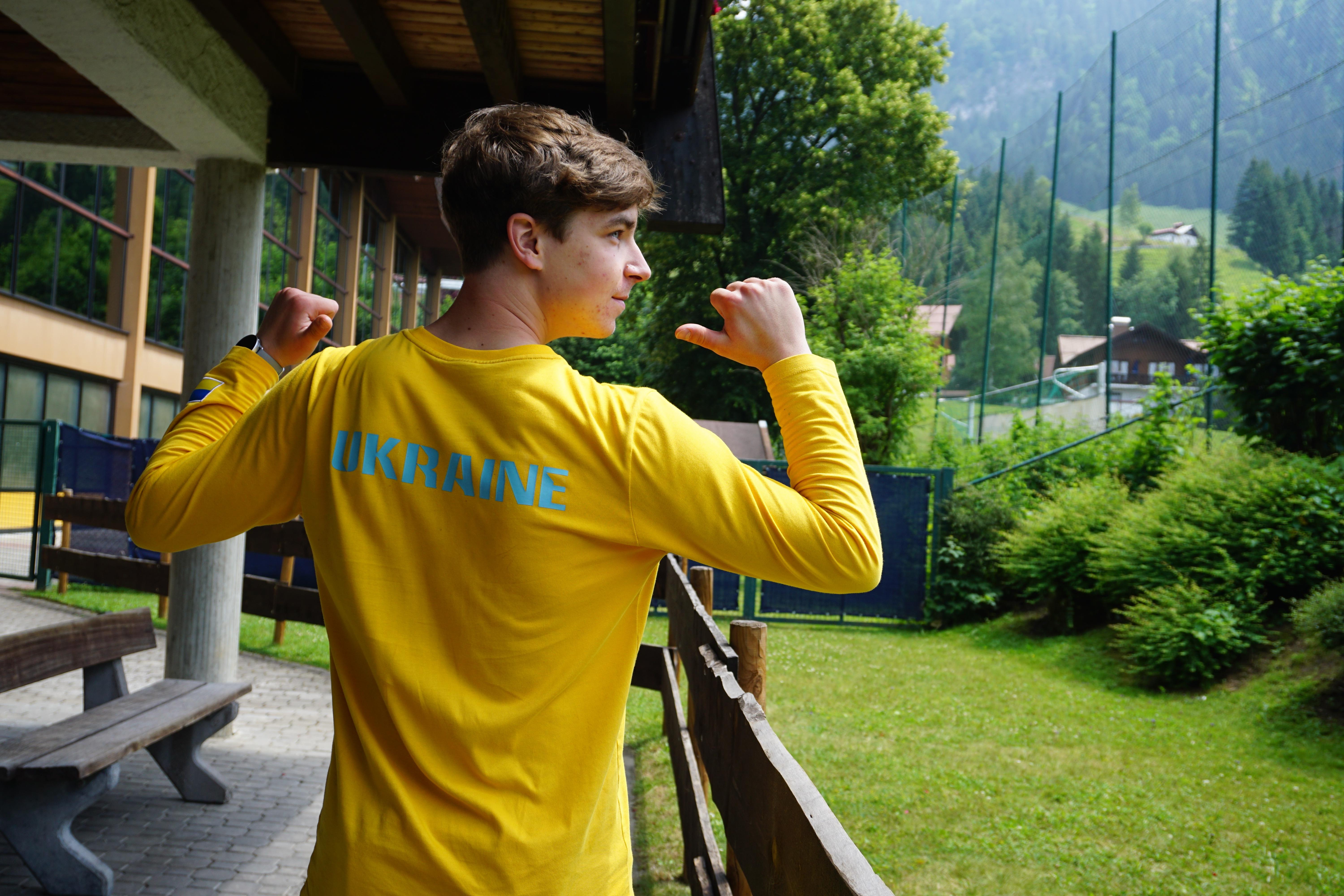 The 20-year-old student has family members and friends back in Ukraine, among them his father, who is at home in Kyiv and an uncle in Odessa.

Despite the war still continuing and air raids not only on the eastern parts of Ukraine, but also on Kyiv and Lviv for example, Pair Skaters Sofiia Holichenko/Artem Darenskyi and their coach Lilia Batutina have returned to their home city of Dnipro on May 24th 2022 after staying in Torun, Poland following the World Championships.

“Our region is close to the front. Some parts of our region are permanently under fire and in the city we often have air alerts. A few days ago a rocket hit a suburb of our city,” Artem said. “Training helps us to distract ourselves from negative thoughts. Just to sit around not knowing what comes next and to do nothing is not the best way. Our families, coach, friends are constantly around us to help so that we have the possibility to train and feel relatively safe,” he added and pointed out the support they get from their club, their ice rink administration and their families. “We have big plans for the upcoming season. We continue to train and we will continue to represent our country.” 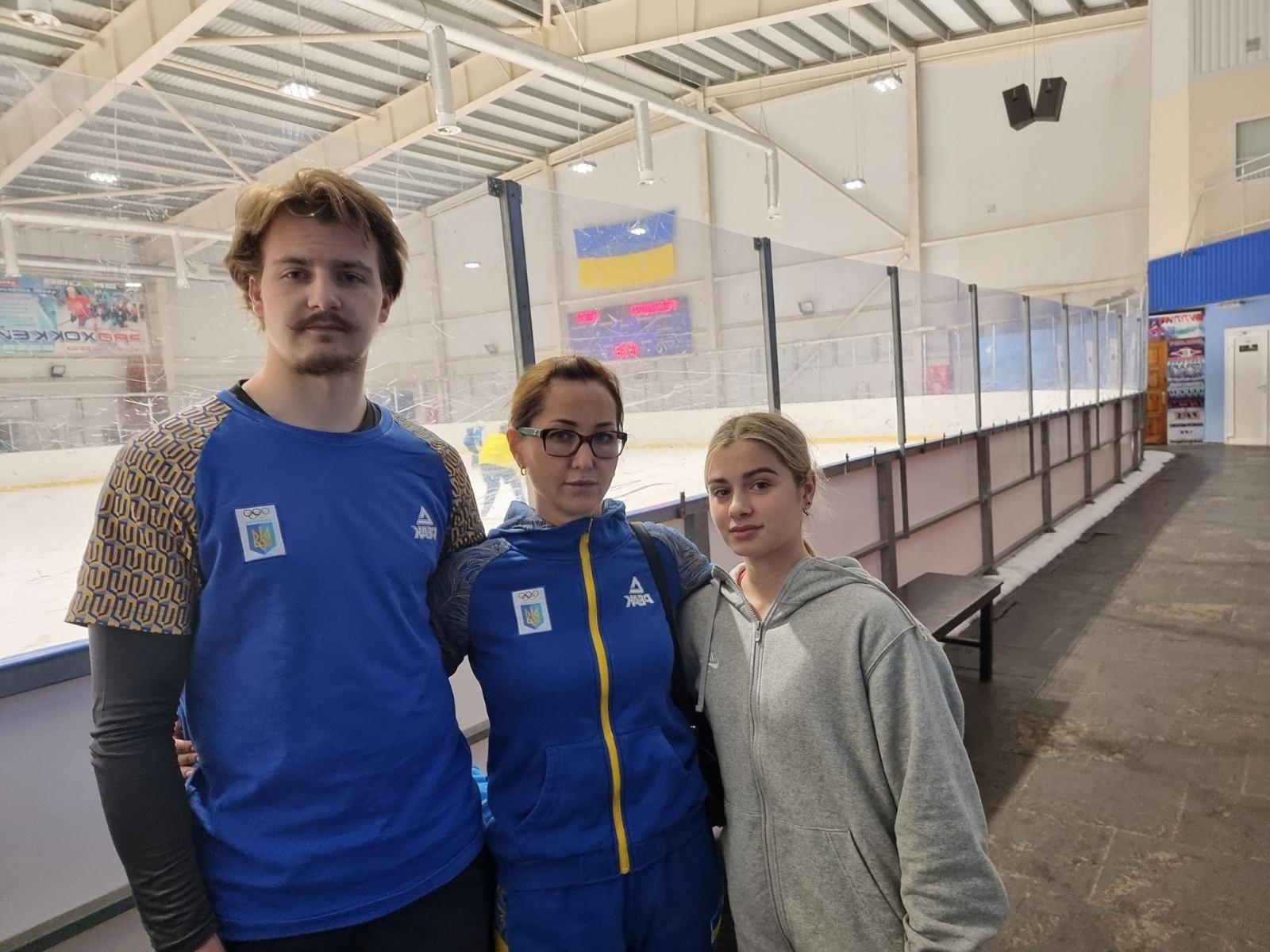 Sofiia Holichenko and Artem Darenskyi (UKR) and their coach Lilia Batutina have returned to their home city of Dnipro, Ukraine. @ Holichenko/Darenskyi

The Ukrainian Skating Federation is trying to keep track of their Skaters and doing what they can to support them. They launched a fundraiser and monitor the situation in the country. In Odessa, Skaters are training on a small ice surface and in addition to the one in Dnipro, there are two rinks in Kyiv – one is standard size, but it is used for storage of humanitarian aid while the second one is smaller and in a tent.

The Skaters and coaches have been affected in many different ways. Coach Aleksandr Artyshchenko lived in the city of Irpin, a suburb of Kyiv that was occupied and heavily destroyed. Many apartments in Kharkiv - where Skaters or Coaches lived - were damaged or destroyed. The three ice rinks in Kharkiv were destroyed and the Federation has no information about the current status of the recently opened rinks in Melitopol and in Mariupol in the south of the country. Most likely they are gone. And there were not many rinks in Ukraine to begin with, as Judge and Federation Official Anastasiia Makarova pointed out.

“Unfortunately, the news from Ukraine are not very good, the war is continuing,” Nikitin said. “Our families are still there and since the World Championships, two ice rinks as well as two arenas where we trained, have been bombed in our city. There is no ice now in Kharkiv and even if the war stops tomorrow, our Skaters in Kharkiv cannot train in their beloved city anymore. But again, we are not discouraged, we know that Ukraine will win. 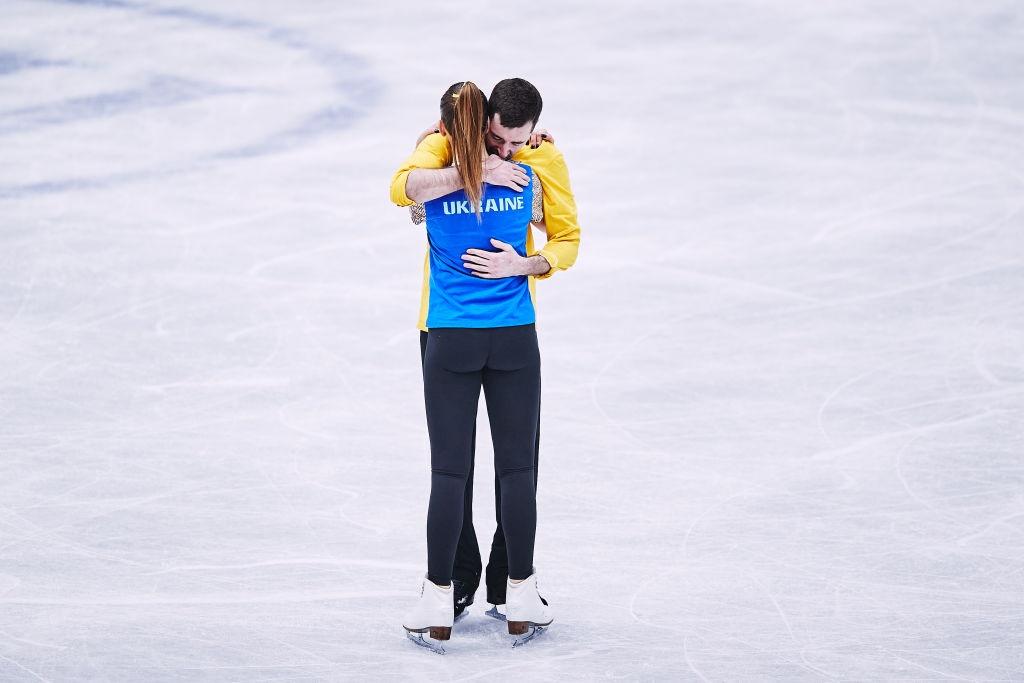 All together we will win and return home and rebuild everything and continue to train. Even though it is very, very, very hard to read the news all the time and when you call home your first question is, ‘how is the situation, where there any air raids?’ However, in spite of the long time that this war is going on, we still do not despair and we know very well that good always defeats evil and Ukraine will definitely win and return all its territories, and not a single victim or destroyed building will be all for nothing,” he concluded.