Wesley Chiu (CAN) steps up

Wesley Chiu has taken a big step forward from his debut at the ISU Junior Grand Prix when he finished 13th in Egna in 2019. The 16-year-old from Richmond, BC took a strong lead in the Short Program to “Vincent” by Govardo and hit a triple Flip, triple Axel and triple Lutz-triple Toe combination. The Canadian made a few errors in the Free Skating set to “I Belong to You” by Muse when he fell on a quad Toe and triple Axel, but he produced another triple Axel and two triple Lutzes. Chiu ranked second in the Free Skating, but overall held on to first place at 199.89 points. “The Short Program gave me a lot of excitement and between the Short and the Free I had to really focus on calming myself down and staying focused,” Chiu noted. “In the long program I feel like I struggled a bit in the beginning, but I was able to push that aside and really finish the program strong.”

Arlet Levandi (EST) stood in third place following the Short Program, where he singled the Flip that is required as a double or triple in the Junior Short Program, but he earned a level four for all his spins and the footwork. The son of 1984 ISU World Figure Skating silver medalist Anna Kondrashova won the Free Skating with six clean triples and moved up to second to claim the first-ever medal for an Estonian male single skater in the ISU Junior Grand Prix of Figure Skating series (196.93 points). Edward Appleby placed second in the Short Program and third in the Free Skating, becoming the first ISU Junior Grand Prix of Figure Skating medallist from Great Britain for 19 years on 182.41 points. Jenna McCorkell had won bronze as well back in 2002.

Isabeau Levito skated to a clear victory in the Junior Women in her ISU Junior Grand Prix of Figure Skating debut ahead of Chaeyon Kim (KOR) and Kaiya Ruiter (CAN). Levito turned in two strong performances and made no errors. Her Short Program to “The Swan” by Camille Saint-Saens featured a triple Flip and triple Lutz-triple Toe combination. The 14-year-old reeled off seven triples in her Free Skating to the “Russian Dance” from “Swan Lake”, looking precise and elegant, to take the gold medal. Her score of 202.35 would have placed her first in the Junior Men’s event.

“My favorite part when I get on the ice is when the music just begins, because then everything is perfect, everything is in harmony and it is just a whole different world. Definitely, when I’m getting into my pose it is not as peaceful as it is once I start my program, but it is still a very good feeling. Of course, I’m a little bit nervous,” Levito shared. “Performing is one of my favorite parts about skating. It is just very fun to look at the judges, smile, wink at them.” 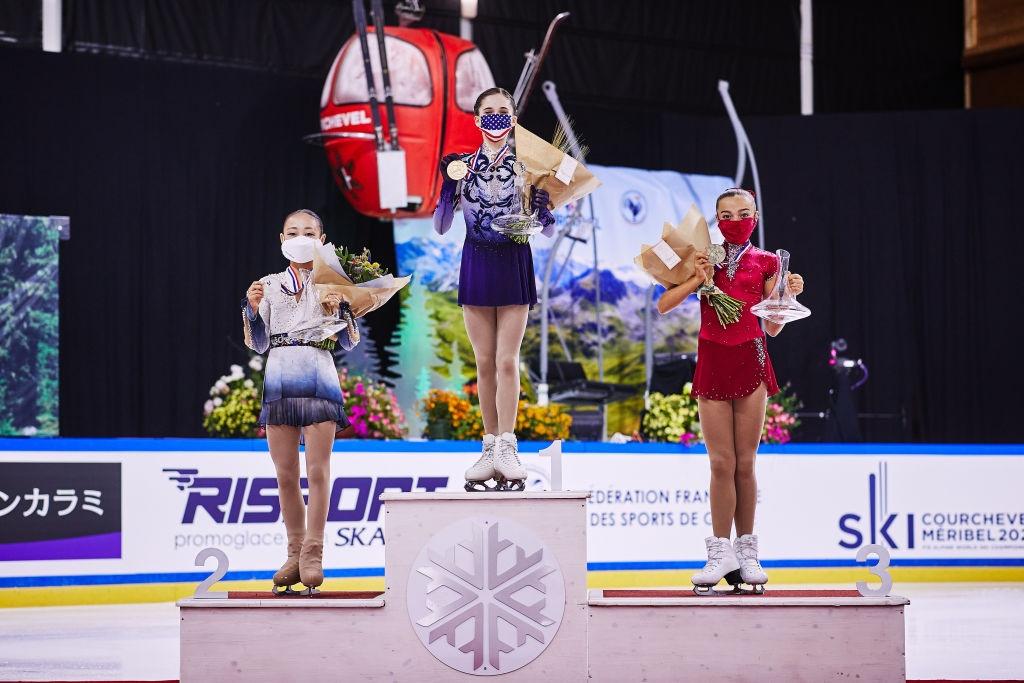 Kim was excellent as well and made no mistakes in her programs to earn silver with 191.46 points. Like Levito, she competed in her very first ISU Junior Grand Prix of Figure Skating event. Ruiter followed up on her silver medal from the ISU Grand Prix of Figure Skating the week before and returned to the podium to pick up bronze with 179.92 points.

Oona and Gage Brown edged teammates Isabella Flores/Dimitry Tsarevski for gold in the Ice Dance competition. Flores/Tsarevski led narrowly in the Rhythm Dance to “Oh What a Night for Dancing”. They collected a level four for the first Blues pattern, the twizzles and the lift. In the Free Dance, Brown/Brown came out on top with their performance to a medley of pieces by Muse. The brother-and-sister team completed level-four lifts and twizzles and totalled 154.25 points. They have competed in the Junior series since 2018 and this was their first medal.

“The last Junior Grand Prix season was two years ago and we had a lot of time to ourselves to expand, to grow, just to improve every little thing that we possibly can,” Gage Brown said. “In the (previous) JGP we had little mess ups here and there and we just worked hard to keep it clean. We just tried as hard as we could and kept pushing,” his sister added.

Flores/Tsarevski had almost the same level of difficulty in their dance to “Nuvole Bianche” by Ludovico Einaudi and to “Earth Song” by Michael Jackson, but they slipped to second at 153.07 points. Solene Mazingue/Marko Jevgeni Gaidajenko (EST), who compete in their first season as a team, ranked fifth in the Rhythm Dance but moved up to third in the Free Dance (138.23 points). They capped off a successful event for Estonia by bringing home a second medal.

A total of 69 Skaters/Couples representing 27 ISU members competed in the second ISU Junior Grand Prix of Figure Skating event of the season. However, due to the ongoing pandemic travel restrictions apply and not all Skaters that were originally assigned were able to attend the event.

The ISU Junior Grand Prix of Figure Skating Series continues next week in Kosice (SVK). The ISU has an anti-Covid protocol in place to keep all participants of the events as safe as possible.