Russia’s Sofia Akateva continued to push the limits in women’s skating becoming the first female Skater to perform a triple Axel and three clean quadruple jumps in one program. The Russian team once again was successful taking home eight out of 12 medals at the sixth ISU Junior Grand Prix event Baltic Cup in Gdansk (POL). Cyprus earned their first medal in the ISU Junior Grand Prix, a bronze. The remaining three medals went to Kazakhstan, the United States of America and the Republic of Korea.

Russia’s rising star Sofia Akateva once again set the bar very high and claimed her second ISU Junior Grand Prix title with 42 points to spare ahead of teammate Elizaveta Kulikova. Akateva won the Short Program with a triple Axel-triple toeloop combination and then dominated again in the Free Skating to “Mulan”, nailing another triple Axel, a quad toe-triple toe, quad Salchow and quad toe-Euler-triple Salchow combination – this time she performed these difficult elements cleaner than two weeks ago in Krasnoyarsk and became the first woman to land a triple Axel and three clean quads in one program. The 14-year-old racked up 225.64 points.

“I managed to skate cleaner in Poland, because I’ve worked with my coaches on the mistakes I made in Krasnoyarsk,” Akateva shared. “It also helped me that this was my second competition, I was less nervous. I don’t think about setting records. I just love what I’m doing and I love difficult jumps. It is nice that I was able to do something that I haven’t done before.” 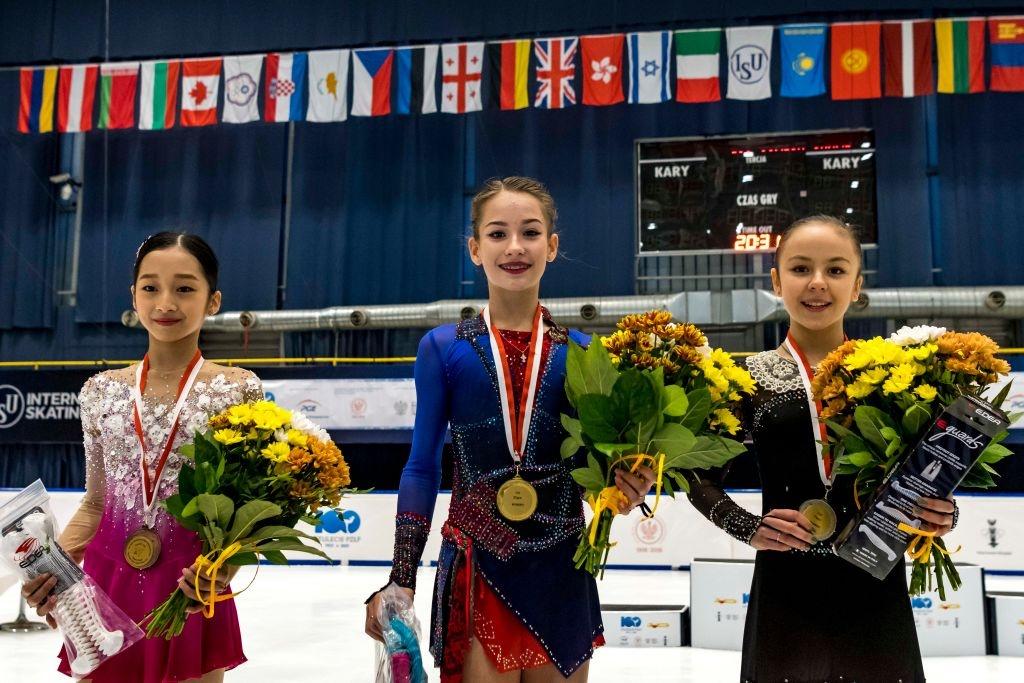 Kulikova finished fourth in the Short Program after falling on her underrotated triple Lutz-triple toe combination. The 13-year-old rallied back in her Free Skating and delivered a strong program that included six clean triples to move up to second place at 183.44 points, edging Jia Shin (KOR) for silver. Shin ranked second following an excellent Short Program, but fell on a triple Lutz in the Free Skating (183.42 points). Kulikova and Shin won their first medals on the ISU Junior Grand Prix.

Lutfullin took the lead in the Short Program, although he stepped out of his triple flip. Performing to “Mala Luna” in the Free Skating, the 17-year-old pulled off a quad toe, quad Salchow-double toe, another quad Salchow as well as a triple Axel-Euler-triple Salchow combination to set new personal bests in the Free Skating with 155.20 points and in the total score with 231.06 points.

“I came here to enjoy my performances,” Lutfullin commented. “I kept my cool, I just had to go out and do calmly what I know to do and that’s it. I was not really nervous. I had to tune out and not to think about placements and that helped me. In Krasnoyarsk I had some errors in the Free Skating, and in Gdansk I wanted to improve my skating and I skated cleaner. Unfortunately, the flip in the Short was on two feet.”

Shaidorov ranked sixth in the Short Program as he slightly underrotated his triple Axel and received an edge call for his triple flip. The student of 1994 Olympic Champion Alexei Urmanov then delivered a strong Free Skating to “Once Upon a Time in America” that featured two quad toeloops and a triple Axel (207.03 points). Rukhin was second in the Short Program but slipped to third on 202.28 points after missing some jumps in the Free Skating.

Ekaterina Chikmareva/Matvei Ianchenkov came from behind to lead the Russian Junior Pairs to a podium sweep in Gdansk. Ekaterina Petushkova/Evgenii Malikov earned the silver and the bronze went to Polina Kostiukovich/Aleksei Briukhanov.

Chikmareva/Ianchenkov had a rough Short Program when she fell on the throw triple Salchow and he singled the Axel. The JGP Krasnoyarsk Champions fought back as “Bonnie & Clyde” in the Free Skating and put out a flawless performance that was highlighted by a huge triple twist, side-by-side triple jumps, triple throws and difficult lifts. The couple from Perm scored 118.69 points and moved up to first at 171.97 points.

“I think in the Short Program we went out too calm and relaxed and that let us down,” Ianchekov commented. “Of course, we don’t have yet much experience,” Chikmareva added. “I’ve switched from Singles to Pairs only a year ago. We still have to learn a lot. But the poor performance in the Short Program pushed us. We had nothing to lose, therefore we gave a 100 percent in the Free Skating. The performance in Gdansk was a huge learning experience. We realized: no matter what happened, you can’t relax and give up. The desire to win does wonders,” she concluded. 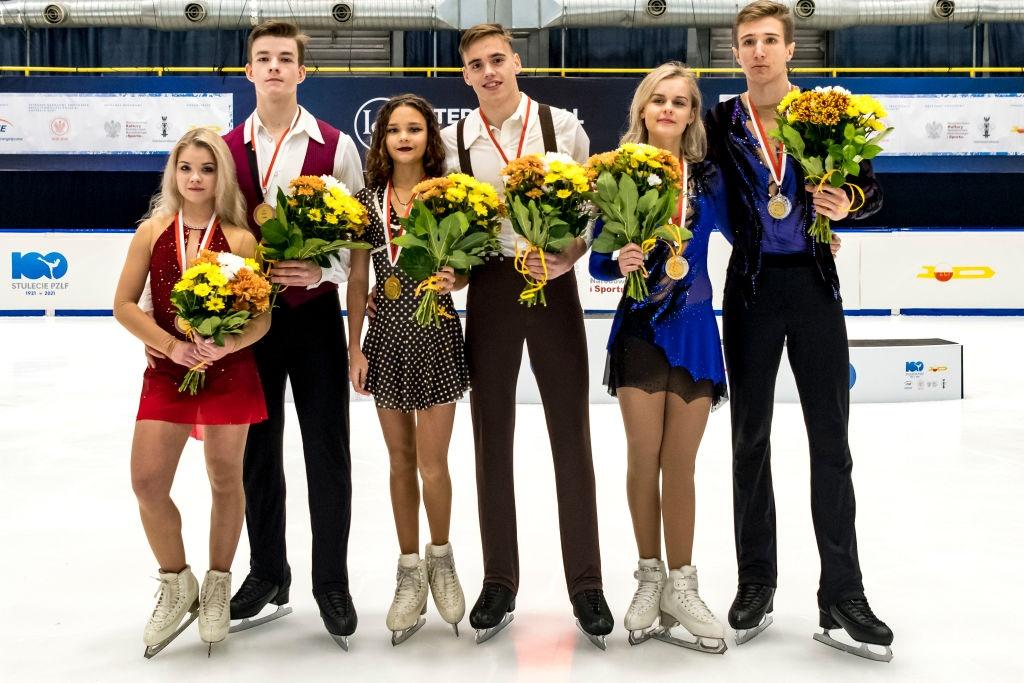 Petushkova/Malikov delivered a strong Short Program and stood in second place. The team from St. Petersburg struggled a bit with their double Axel double-toe double-toe combination and their triple twist in the Free Skating, but remained in second place at 169.80 points overall.

Kostiukovich/Briukhanov shone in the Short Program that they won, but they dropped to third after some errors in the Free Skating (162.14 points).

Irina Khavronina/Dario Cirisano (RUS) danced to their second ISU Junior Grand Prix gold medal this season. The team from Odintsovo near Moscow earned a strong lead in the Rhythm Dance to “Babylon Berlin”, picking up a level four for the twizzles and a level three for the Blues Pattern, the rotational lift and the midline step sequence. The ISU Junior Grand Prix Krasnoyarsk Champions built their lead in their Tango Free Dance, completing four level-four elements and totalled 168.96 points.

“The victory in our Grand Prix events means that we are moving into the right direction. We’ll continue to work so that our program looks better, that we are bringing across the character that we’ve chosen more brightly,” Cirisano said. 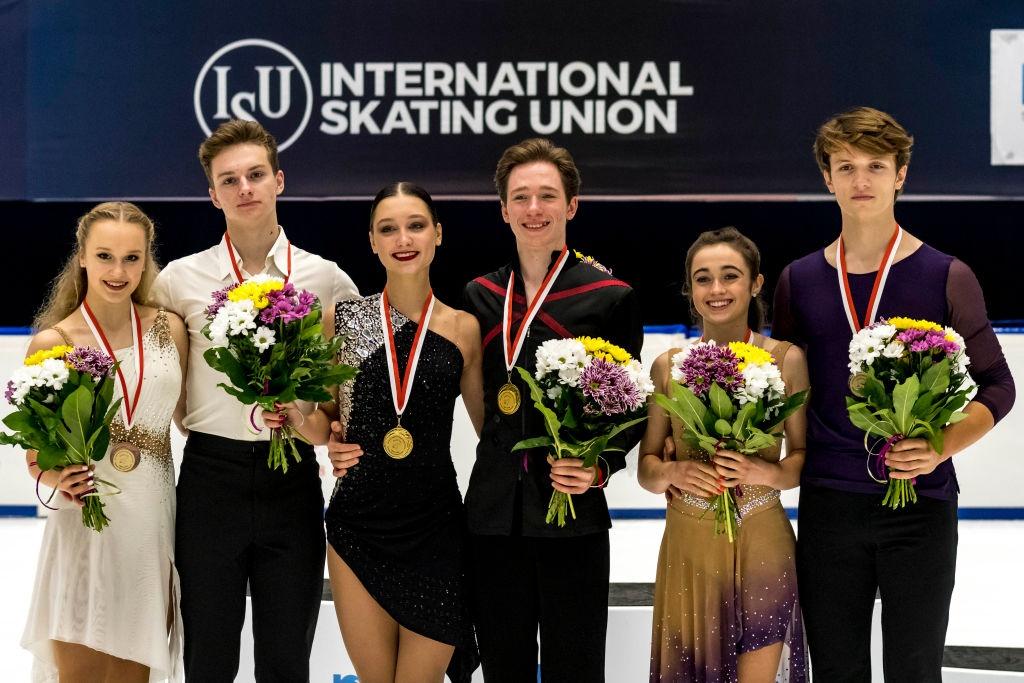 “We were very well prepared for this Grand Prix,” added Khavronina. “We’ve done a huge amount of work in between the competitions. We were leading after the Rhythm Dance, but every time you go out to compete it is a new event and all scores and results are not important.”

Isabella Flores/Dmitry Tsarevski (USA) collected the silver medal. They team from Colorado Springs produced level-four twizzles and a level-four rotational lift in their Rhythm Dance and remained in second place with a strong Free Dance to “Nuvole Bianche” by Ludovico Einaudi and “Earth Song” by Michael Jackson (154.34 points).

Angelina Kudryavtseva/Ilia Karankevich made a little bit of history by winning the first medal for Cyprus at the ISU Junior Grand Prix. They sat in fourth following the Rhythm Dance but then moved up one spot with their Free Dance coincidentally set to “Nuvole Bianche” as well. They netted 148.59 points.

The ISU Junior Grand Prix of Figure Skating Series continues this week with the seventh and last event, the Cup of Austria in Linz (AUT). The ISU has an anti-Covid protocol in place to keep all participants of the events as safe as possible.

In Focus: The best pictures of the ISU Junior Grand Prix of Figure Skating - Ljubljana (SLO)