Malinin skated to the lead in the Short Program to “Billie Jean”, completing a triple Lutz-triple toe, triple flip and a triple Axel. Skating to “Nobody Knows” and “Golden Age” in the Free Skating, the JGP Courchevel Champion hit a quad Salchow, triple Axel and five more clean triples, but he underrotated two jumps and made an error on his quad toeloop. The son of 1999 ISU Four Continents Champion Tatiana Malinina accumulated 245.35 points for his second win on the circuit.

“I feel really good, because this time I was able to keep myself under control and really make sure I get them (the jumps) done. Overall I felt this program was one of the best I’ve done,” Malinin noted.

Kovalev stood in second following the Short Program with a clean performance. The Muscovite produced a quad toe and triple Axel-triple toe in the Free Skating to a Queen Medley, but he doubled his planned quadruple Salchow. Kovalev ranked third in the Free Skating, but overall remained in second place at 221.51 points to earn his first JGP medal.

Sarnovskiy underrotated the back end of his triple Lutz-triple toeloop combination in the Short Program and placed third. The JGP Kosice Champion turned in a solid performance in the Free Skating and was second in the segment, but third overall (216.70 points). 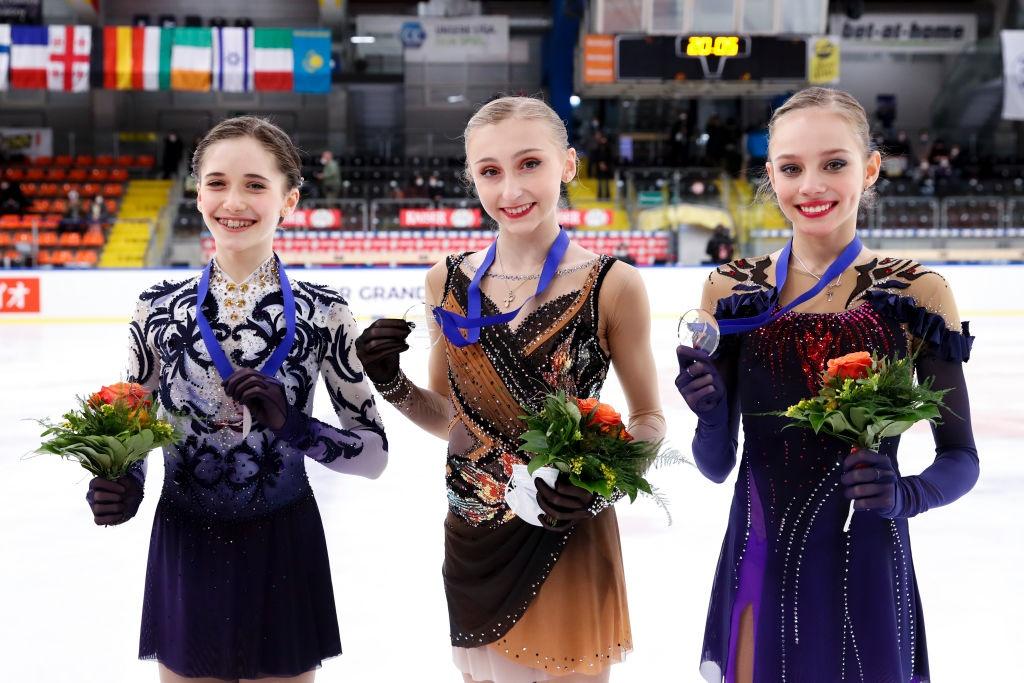 Muravieva won the Short Program with a strong performance to “Ne me quitte pas” that included a double Axel, triple flip and triple Lutz-triple toe as well as level-four spins and footwork. The JGP Kosice silver medallist followed up with another flawless program in the Free Skating to “Young and Beautiful” that was highlighted by seven triple jumps. The student of 2006 Olympic Champion Evgeni Plushenko totalled 211.81 points for her first JGP victory.

“I tried very hard for everything to work out,” Muravieva shared. “I wanted and hoped to make it to the (Junior) Final. It was my little dream and it came true. I was very nervous, but my coaches helped me. They are always supporting and helping me.”

Levito delivered two excellent, clean programs as well. She landed seven triples in the Free Skating to the “Russian Dance” from Petr I. Tchaikovski’s “Swan Lake”. With 208.31 points, the 14-year-old got silver and her second JGP medal after gold in Courchevel.

Zinina put out a clean Short Program but missed her two quad toeloops in the Free Skating to finish third (190.66 points). 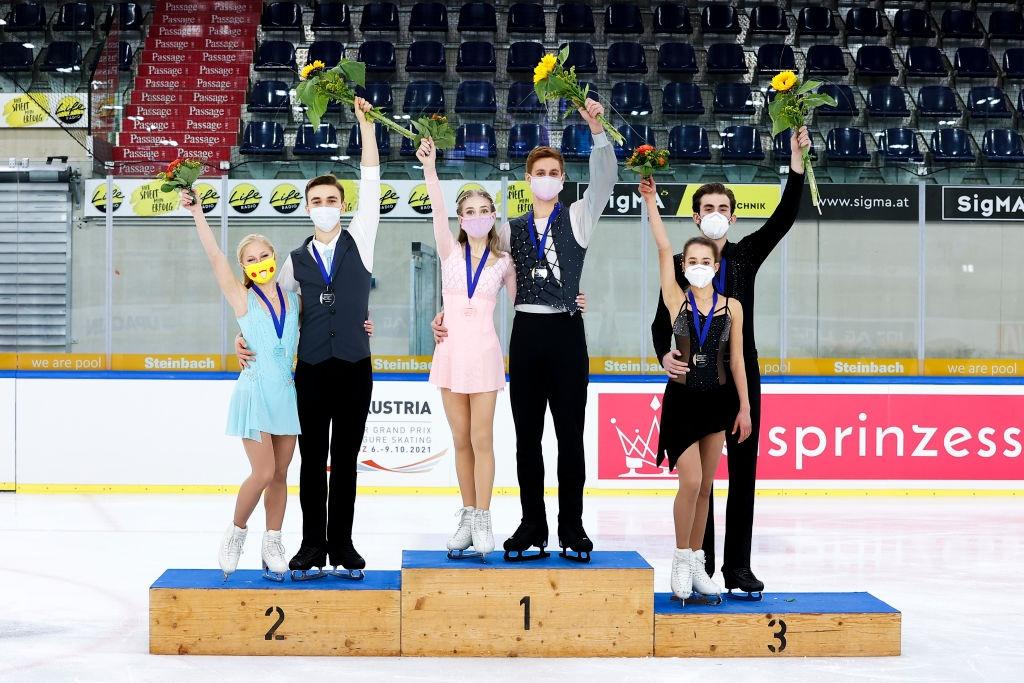 Khabibullina/Knyazhuk won the Short Program with a solid performance, but gave some points away on the levels of the twist and step sequence that were rated a level two. The couple from Moscow pushed the technical limits in their Free Skating to “Romeo and Juliet”, becoming the first Pair Skating team to produce a triple Lutz-Euler-triple Salchow combination and a triple loop as solo jumps in competition. They made no mistake and scored 188.84 points.

“We are very happy that we won this event and qualified for the Final,” Khabibullina commented. “When we saw our scores, we were a bit shocked and very happy. We did not think about placements, we did not even imagine that we would come first. But we came here to fight, we had to qualify for the Final,” she continued.

Mukhortova/Evgenyev were second in the Short Program after she fell on the double Axel. Performing to a Frank Sinatra Medley in the Free Skating, the JGP Kosice Champions completed a triple Salchow-Euler-double Salchow, triple toe and triple throws. The Muscovites netted 183.64 points.

JGP Kosice silver medalists Safina/Berulava made no errors in their two programs to win bronze on 179.27 points. 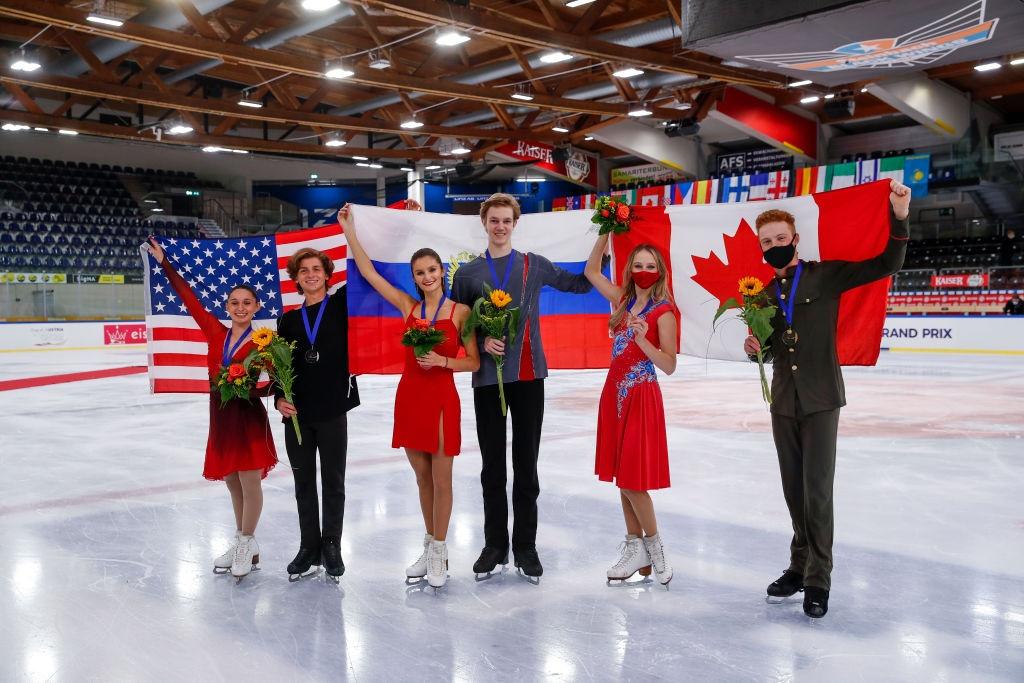 Tyutyunina/Shustitskiy won the Rhythm Dance clearly, picking up a level four for both Blues Pattern sequences. Dancing to “Babe I’m Gonna Leave You” by Led Zeppelin, the Muscovites collected a level four for their combination spin, the twizzles and the combination lift. Overall they accumulated 162.28 points and secured their second medal this season after bronze in Kosice.

“Our first feeling after our performance was – we left everything out there on the ice, all emotions, all power,” Tyutyunina said. “We felt relieved that we were able to pull ourselves together, to skate both programs clean and we were very pleased with our performances even before we got our scores,” she added.

Brown/Brown, who had won the second event in Courchevel, were second in the Rhythm Dance, but ranked only fifth in the Free Dance as she fell on the twizzles. The brother-and-sister team placed fifth in the segment but held on to second place at 152.74 points.

Bashynska/Beaumont moved up one spot from fourth place in the Rhythm Dance with a dance to Russian Folk songs to take their first medal on the junior circuit with 152.06.

A total of 121 Skaters/Couples representing 40 ISU members competed in the final ISU Junior Grand Prix event of the season.

Due to the current situation and ongoing travel restrictions, the ISU Council concluded that it is impossible to implement a fair and consistent ISU Junior Grand Prix ranking for the 2021/22 season and therefore no ranking was applied. The ISU Council decided that the winners of each Junior Grand Prix qualified plus the second best Skaters/Couples by total score until the maximum number of entries of six for Junior Men, Junior Women and Junior Ice Dance and four for Junior Pairs is reached. The host country Japan gets a wild card in the Single Skating categories. The ISU Junior Grand Prix of Figure Skating Final is currently scheduled to be held on December 9-12, 2021 in Japan (see ISU Communication 2431 for more details).

The ISU Junior Grand Prix of Figure Skating Series continues this week with the seventh and last event, the Cup of Austria in Linz (AUT). The ISU has an anti-Covid protocol in place to keep all participants of the events as safe as possible.

In Focus: The best pictures of the ISU Junior Grand Prix of Figure Skating - Gdansk (POL)

In Focus: The best pictures of the ISU Junior Grand Prix of Figure Skating - Ljubljana (SLO)