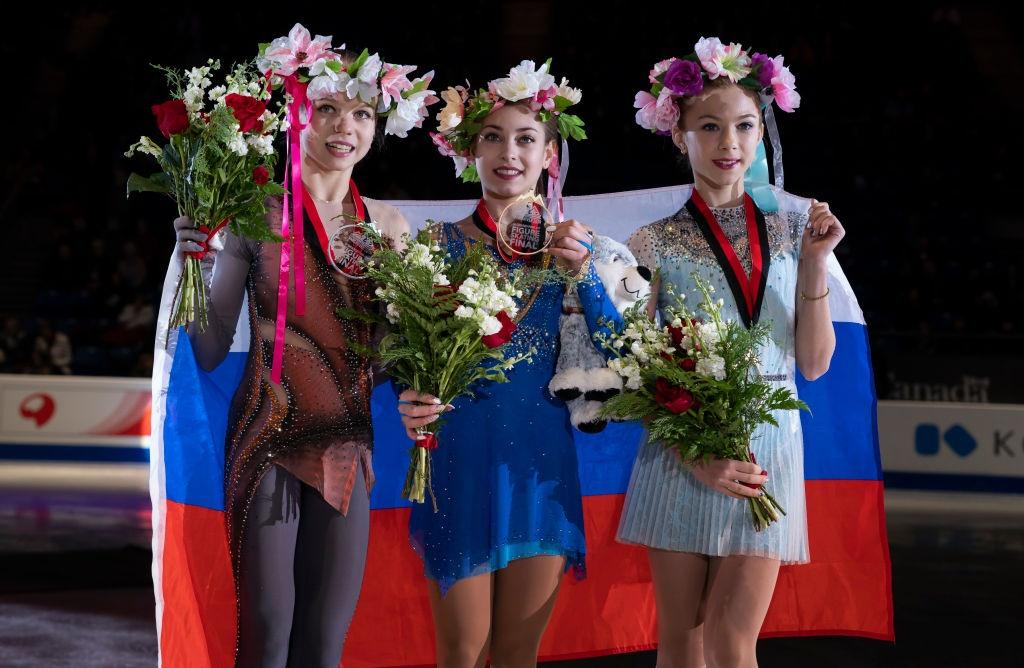 Alena Kostornaia led the Russian Junior Ladies to a podium sweep at the ISU Junior Grand Prix of Figure Skating Final on Saturday in Vancouver (CAN). Alexandra Trusova claimed the silver and the bronze went to Alena Kanysheva,

Overnight leader Kostornaia put out a beautiful performance to “Romeo and Juliet”, completing a triple flip-tripe toeloop, a triple Salchow-triple toeloop as well as three more triples and exquisite spins and footwork. The World Junior silver medalist improved her personal best score by almost ten points with 141.66 points and totaled 217.98 points to seal the victory. “This season is very important for me, because next year I plan to go to the senior level. I wanted to show a clean program. I had a few elements that didn’t work out, including the main combo and the last jump, I’ll be working to make them better,” the 15-year-old noted. “My goal right now is to get selected for the Russian National team, and go to (Junior) Worlds.”

Skating to “The Fifth Element” soundtrack, quad queen Trusova went for three quads and successfully landed a quad toe, but stepped out of a the first quad Lutz and fell on the second quad Lutz attempt. The 14-year-old went on to produce a triple Lutz-triple loop and a triple Lutz-Euler-triple Salchow combination as well as two more triple jumps and level-four spins and footwork. The World Junior Champion earned 140.77 points and remained in second place on 215.20 points. “I didn’t do well on both of my (quad) Lutzes, unfortunately the first one didn’t work out, and that’s why I didn’t have a combination there. On the second one I fell, which is why I don’t have a combination there either. But I did it (the combination) elsewhere, and my other jumps worked out. I guess that during this competition I was a bit nervous, because I have three quad jumps. I did them well during the practices and in Moscow, but today it just didn’t go well,” Trusova explained.

Kanysheva’s performance to “Dreams of a Winter Journey” featured six clean triples and difficult spins. The only glitch came when she underrotated a triple Salchow. The 13-year-old posted a new season’s best with 129.48 points in the Free Skating which added up to 198.14 points overall. Kanysheva took the bronze in what was her debut at the Junior Grand Prix Final. “I’m really happy i wasn’t expecting or be able to even dream about being on the podium in this competition. I tried my best, I did the maximum possible and it eventually worked. I showed everything I can do except for a tiny mistake on the combination jump with the Salchow - it was definitely underrotated. But I tried my best and I’m very satisfied with myself and the program,” Kanysheva said.

Substitute Stephen Gogolev (CAN) steals the show, skates off with Junior Men gold